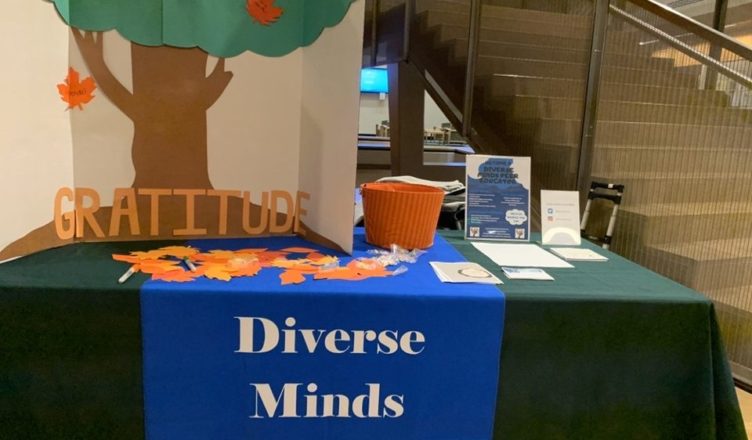 During the week, members of the campus community were invited to explore ways of mental health self-care and healing from around the world in the Union, reflect on things they are thankful for in West Village, and participate in a positive affirmation photo booth.

“The main goal is to increase awareness about mental health and wellbeing, especially in diverse communities,” said Counseling Center Diversity Coordinator and staff psychologist G Wei Ng. “That’s the main theme that drives all of the events this week.”

Other themes of the week included normalizing the conversation around mental health and the promotion of the use of gratitude to build resilience within individuals in marginalized communities.

During the “Fall Health Fair” event, students were able to paint words of affirmation of pumpkins to take home with them. These pumpkins are meant to be positive reminders of an individual’s resilient qualities.

“I think Minority Mental Health Week helped to destigmatize mental health and mental illness, which was one of the underlying threads woven throughout the week,” said Keeba Gardner, who serves as coordinator of inclusion and resiliency skills for the Counseling Center. “It’s really impactful to for students to see other students who look like them running this programming.”

Gardner went on to highlight how the week also gave them the opportunity to collaborate with other peer educator groups the Counseling Center offered, such as the Body Image Peer Educators for the “Diverse Minds, Diverse Bodies” event.

The week was the first in what the group hopes becomes an annual event, with the week’s most impactful events being repeated.

While Ng and Gardner oversaw, student peer educators, such as junior psychology major Anais Assi, were largely responsible for the coordination of the week. Assi originally got involved with Diverse Minds after working at the Counseling Center and being recommended by one of her supervisors.

According to Assi, she was particularly attracted by the diversity and mental health aspect of the group compared to other peer education groups.

“Diverse Minds was different in that they talked about mental health in the terms of diverse communities,” said Assi. “I come from a diverse community and I know that in mine it wasn’t something that was talking about it. Growing up, I always thought ‘why is nobody talking about this? Wouldn’t it benefit everyone to talk about it?’”

“We’re a small group – only six, so it was a challenge for us this semester to staff some events as all of our peer educators are full-time students as well,” said Ng. “We’re hoping to recruit more so we can build upon what we have and continue the important work we do.”

While Minority Mental Health Week has ended, Assi encourages students to follow the group’s social media as a way to stay engaged with the topics touched on at the events.

“Minority mental health isn’t just the week for us, it’s the basis of the whole [peer education program],” said Assi. “We host a plethora of events throughout the year that we like showcasing as well.”