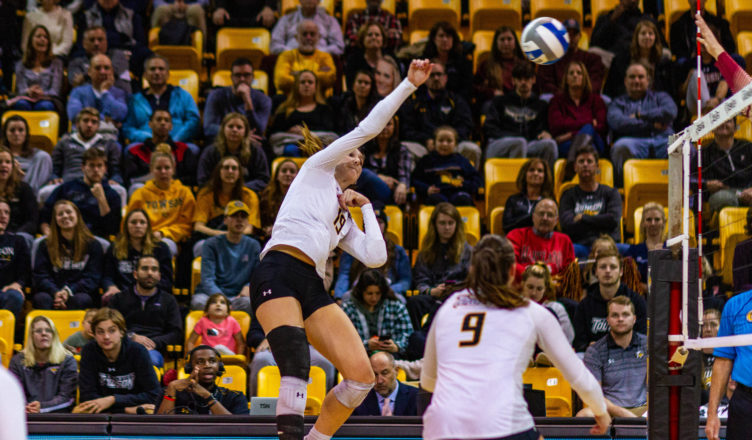 photo by Amanda Bosse/ The Towerlight

The Towson Tigers recognized their five seniors before their match against the William & Mary Tribe. Towson won its last regular season match 3-1 before the CAA Tournament next week.

After their defeat of the Tribe, the Tigers (26-2, 16-0 CAA) finished the regular season with 16 straight CAA wins.

“We were the first team in CAA history to go undefeated in the new 16 game format,” head coach Don Metil said. “This team also set the longest Towson winning streak ever in the program’s history.”

The scores were close in the fourth set. Neither team led by more than four points until midway through the set when the Tigers took a six-point lead after kills by redshirt sophomore middle blocker Nikiya Mitchell and senior outside hitter Olivia Finckel. Towson took advantage of four Tribe errors.

Junior defensive specialist Camryn Allen had an ace in this set which extended her streak of 24 games with an ace.

Sophomore outside hitter Emily Jarome added to the Towson lead with a kill and helped the Tigers win the set 25-18.

“We made a huge statement and it was awesome,” Ertz said.

The third set consisted of a back and forth battle in the beginning of the set. The teams tied five times until Towson took a three-point lead after kills by senior middle blocker Silvia Grassini and Ertz.

The final point of the set was acquired from a block by Grassini and Ertz as the Tigers won 25-19.

In the second set Towson took a commanding 15-5 lead as the Tigers scored seven straight with five coming off William and Mary errors. The Tribe struggled in the set, committing an additional nine errors as Towson won 25-13. Senior setter Marrisa Wonders contributed two aces in the set.

Despite the Tigers committing six errors, Towson came back from a five point deficit in the first set with a 5-2 run. Ertz had two kills during the run, two of her 11 in the game.

Senior night marks the end of an era, and the team knows next year won’t be the same.

“It’s going to be really tough to not have as many of the older players, so the younger players are going to have to step up,” Mitchell said. “What they bestowed in us is going to carry on for years.”

The Tigers added another win to their streak with their 3-0 victory against the Elon Phoenix.

Towson entered the game with a 19 game win streak, and SECU Arena was filled with over 550 enthusiastic fans, the third most for a volleyball match.

“The amount of energy we’ve had, rallying around it, was just a great way to go out,” Ertz said.

“This was the moment I’ve been working for all year, so it was good to finally get that chance,” Mitchell said. “It’s amazing to work so hard and get a chance to show what I can do.”

The third set included an eight-point run by the Tigers. Six of these points were Towson kills, half of which were by Grassini.

The Phoenix trailed Towson for the entire set. Four of their 12 points in the set were the result of Tiger errors.

These last few games are seen as positive experiences as Towson prepares for the conference tournament.

“Even though we beat every team twice, everyone has played us twice and have a different game plan coming out, so we’re making sure we’re focusing on what we can do to get better.” Ertz said.

The third set concluded with a three-point run by the Tigers which consisted of a kill and an ace by Grassini and a Phoenix error. Towson won the set 25-12.

Grassini made her 200th kill of the season against Elon. Her career kills increased to 315, which tied her for the third most in the 25 point rally scoring era as a Tiger.

The second set was competitive at first until the Phoenix went on a 9-3 run to take a 14-13 lead. Elon took advantage of six Towson errors, but the Tigers also went on a 9-3 run with five Phoenix errors regaining the lead 20-16. Elon scored five of the last nine points, but Towson held on to win the set 26-24.

The first set began with an Elon lead, but the Tigers scored six unanswered including two aces from Jarome to take a 16-12 lead. Towson used four consecutive kills to end the set as 25-20 victors.

The Tigers prepare for the CAA tournament on Saturday, Nov. 23 at 2 p.m. in Hempstead, New York. Towson earned a bye as the top overall seed, and will face the winner of Northeastern and Elon.

“[Although] we have a perfect record in conference, we still have so much to work on and we’re so ready to go in and go to New York,” Mitchell said.