Towson history was made in Philadelphia on Saturday night, and it came in the form of Beyonce, Jason DeRulo, Ed Sheeran and Ariana Grande.

Drexel University was the sight of the 2015 International Championship of Collegiate a Cappella Mid-Atlantic Quarterfinal No. 1, and Towson’s Purrrfect Pitch competed against groups from the host school, as well as five other schools around the region.

“The experience was amazing,” Purrfect Pitch President Gavin Myers said. “We were definitely nervous but still 100 percent confident in our abilities.”

Purrrfect Pitch was selected for the quarterfinal on Nov. 15 after submitting a video audition the month before. From then, it was up to Musical Director Julie Mazzone and the rest of the group to choose and arrange the songs that they’d perform, and Emily Voorhees to choreograph the performance.

“When I joined the group, the group was based mostly on just having fun singing with friends,” senior Gerad Sherman said. “Over the years, we’ve held on to that idea, but we put more emphasis on our musicality … So just the idea that we were actually there competing was almost too exciting to believe.”

Each group had 12 minutes allotted for its three-song, choreographed performance. First up was a mash-up of the song “Pretty Hurts” by Beyoncé, which then transitioned into “Trumpets” by Jason Derulo, sung by Taylor Brown.  Next, the group took on a mash-up of Ed Sheeran’s “Thinking Out Loud” and Edwin McCain’s “I’ll Be,” sung by Kyle Rhodes and Kaitlyn Reaves.

Despite the recommendation that the audience hold their applause until after the set was complete, many in the crowd began to cheer between the first two songs.

“That made us feel even better, knowing that even when asked to keep the applause to a minimum, we were really able to get people on their feet and having fun,” Sherman said. “Really it was in keeping with what Purrrfect Pitch is all about, which is having fun with friends.”

For its finale, Purrrfect Pitch chose “Bang Bang” by Ariana Grande, Nicki Minaj and Jessie J. Purrrfect used a trio of its own to perform the summer hit, with Brown, Reaves and Voorhees singing lead vocals.

At the end of the competition, each group came on stage to hear the results. Off the Beat from Penn and Superfood from Georgetown finished first and second respectively and moved onto the semifinal round. Although the results meant the end of the road this season for Purrrfect Pitch, Myers said it was a great experience regardless.

“We knew that representing our university was important and we made sure to do that at the end of the performance,” Myers said. “It was great to be in a place with other groups that were as passionate and dedicated as we were.”

Purrrfect Pitch will begin preparations for the spring concert next week. The group will host auditions Feb. 11 for interested students. 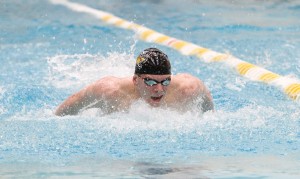