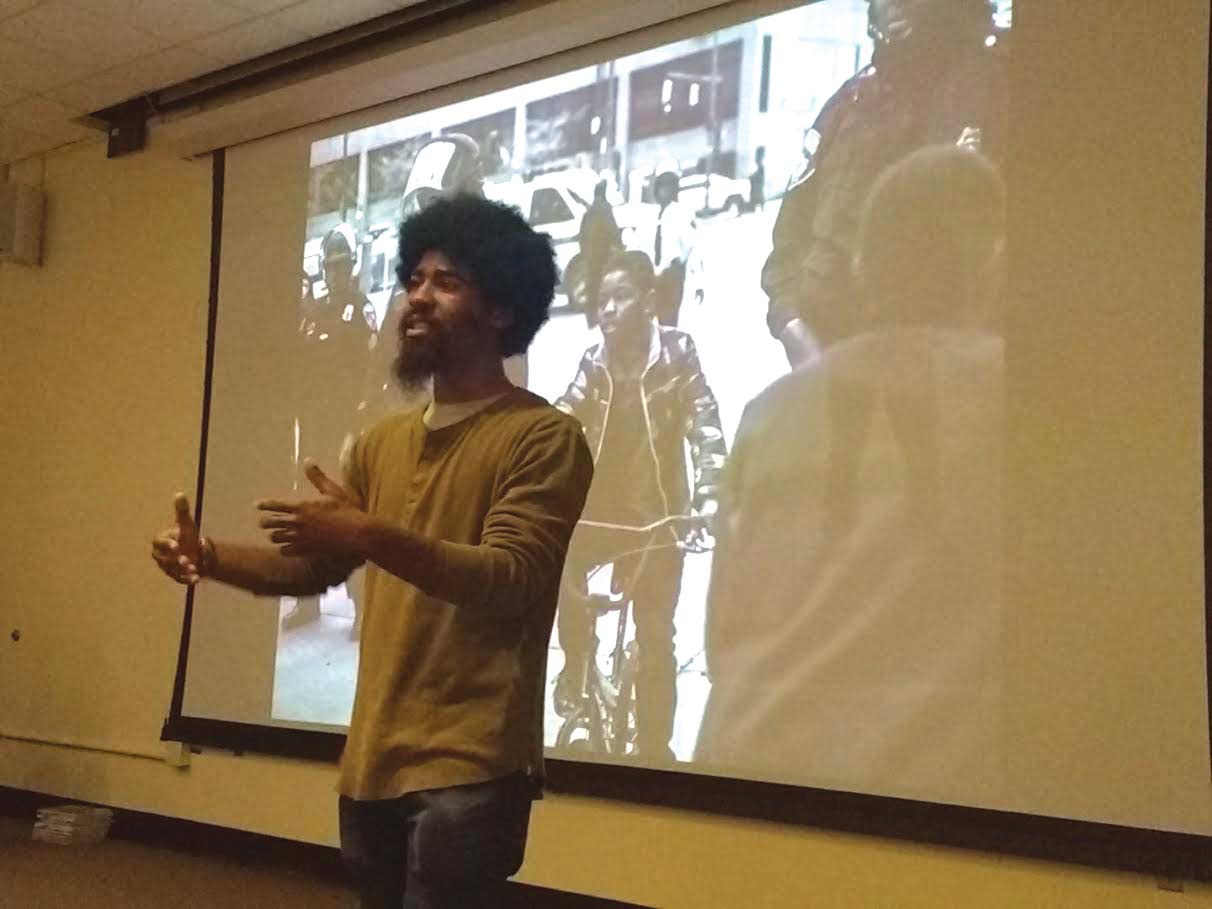 Photographer Devin Allen shared his passion for street photography and how he has spent his career documenting the lives of real people living in the streets through pictures during a Nov. 2 lecture.

Allen, a 29-year-old photographer from West Baltimore, started his career when his grandmother bought him his first camera in 2013. He was inspired to start photographing people when two of his close friends were shot and killed in a gunfight.

Some people have found Allen’s work to be an inspiration, including entrepreneur and philanthropist Russell Simmons, who stumbled upon Devin’s work on Instagram and donated to his GoFundMe page to help with his career.

Over the course of his career, Allen has been able to work alongside photojournalists like Gordon Parks, and take photos of different ghettos in Asia and Europe.

During the lecture, Allen spoke about his experience in the ghettos of Austria and how he felt about taking pictures of refugee camps and documenting them.

This fearlessness lead Allen to take pictures of the Austrian ghettos, but he found that stopping and talking to the people who had gone through these difficult times was the most important part of his journey.

“To be a good photographer or journalist, you can’t just barge in and just take pictures; you have to stop and be in the moment,” Allen said. “Talk to the people, get to know their stories.”

“I’ve been seeing Devin’s work for a couple of years now since I’ve been in Baltimore,” said senior graphic design major Jordan Levine. “It’s amazing how we can get people like Devin to talk to people in a direct way, and he makes himself available. I also like his mission.”

Allen currently works as a photographer for Under Armour and takes pictures of people like Stephen Curry of the Golden State Warriors. He said that he works there to serve as a catalyst for the company to hire more people from the Baltimore area.

Allen started a mentoring program and works with a company to get cameras in the hands of children in inner-city Baltimore and other places such as Oakland. He is determined to express to the children how powerful art can be by going to different youth centers and classrooms and sharing his story. By doing this, he hopes to help children get invested in the arts and career paths they like such as rapping, basketball and photography.

His mentoring program has even started to move towards helping autistic children and getting cameras in their hands as well.

“It was a very inspiring lecture about how everyone has potential, and to take charge of gifts and chances life shoots at you,” said senior photography major Raymond Johnson. “It inspired me to take more photos and meet new people, and get to know them, because that is where the best stories are.”

Allen is also the author and photographer for his book, “A Beautiful Ghetto,” which is a photobook full of pictures of the protests in Baltimore on April 18, 2015 occurring after the killing of Freddie Gray. It can be found on Amazon and at Barnes and Noble. Allen’s work can also be found on Instagram, under the name bydvnlln.