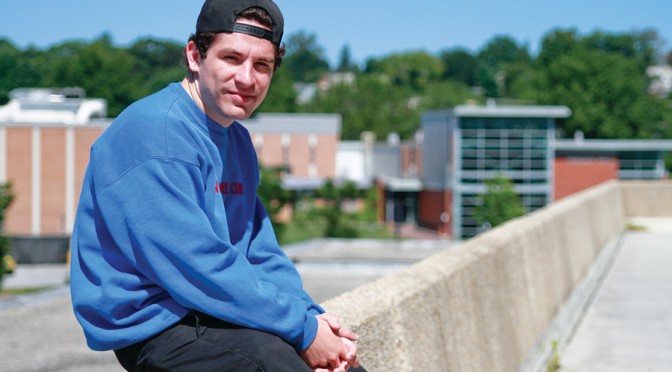 Chris Simms, a Towson senior and photographer, remembers everything about Monday, April 27.

“I was sitting in Paws and eating a grilled cheese with my friend Cadence,” Simms said.

It was about 7 p.m., he had just gotten out of his 6:15 p.m. class and he was sitting in Paws eating a grilled cheese and watching the news with his friend Cadence. On the television, video footage and reports of the unrest in Baltimore played one after another.

“Do you want to go?” Simms asked Cadence.

She thought it was too dangerous, but Simms disagreed.

“I compare it to how I hate riding roller coasters or water park rides,” Simms said. “I would have that itch where I feel like I am regretting something, and I would ride it the last hour we were there, and then be obsessed with it.”

So he left Paws, contacted his friend Tommy, grabbed his Cannon 5D Mark III, headed down to the scene and continued to return every day and night for the next four days to capture another chapter in Baltimore’s history.

“I finally understand why people say they love Baltimore,” Simms said. “Going through all that and then going to see how people love Baltimore, and how they protect their city, and invest in their city, I realized that now I have caught the bug of loving Baltimore.”

Simms, who goes by the alias “ChrisBlockd” online, returned to the city both during the day, and at night during the curfew hours, Monday through Friday. Each day he would post an informal photo on Instagram to show his followers where he was that day, shoot for hours, rush home to edit them and then post them online immediately. He took roughly 4,000-5,000 photos throughout the week.

“I uploaded it and it was just overwhelming, like holy sh*t, I was there,” he said.

Simms also worked with a black and white concept for his photos, similar to the Baltimore based photographer Devin Allen, whose photo was published on the cover of Time Magazine with the caption “America, 1968” with the year crossed out in red, and rewritten as 2015 above it.

“I was like, that right there sums up why it should be black and white,” Simms said. “Besides the technology of [a women in his photo] having a digital camera, and the iPhones in some of the pictures, you can’t tell when it is was taken.”

He said that City Paper photo editor J.M. Giordano, who came to speak to one of Simms’ classes only a few weeks prior to the unrest, also helped to inspire the black and white look of the photographs.

His experience photographing the unrest in Baltimore was Simms first taste of photojournalism, followed by a series of photographs he took at the US Supreme Court on June 26, the day marriage equality was federally mandated. The first of these images, an unedited selfie taken with his iPhone, received over of 12,000 likes after the hashtag #lovewins began trending on Instagram.

Since these events he said, he has had a growing interest in pursuing the avenue of photojournalism.

“It’s way more fun and gets way more emotion back than a lot of the other stuff,” he said. “It has made me interact with people more.”

Prior to the unrest in late April, Simms first got his start as a photographer after receiving a camera for Christmas his freshmen year of college. At the time, he was primarily interested in concert photography for the perks of being able to attend shows in the front row for free, and meet and photograph celebrities and artists he admired. Grieves, RDGLDGRN, Pepper and Streetlight Manifesto were a few of the first bands he was able to photograph. He reached out to them informally via his Towson student email, simply asking if he could come out to shoot the concerts.

“I didn’t really have any intentions at the time,” he said. “I was doing it by myself, and I was emailing people and then one person finally gave me a chance to go to their show and take photos. After that I had work to show, so it just built from there, and then I eventually got linked with a website that would just give me shows to go shoot.”

As his experience grew, his curiosity and desire to experiment developed as well. He spent his days exploring Baltimore, shooting buildings and everyday people on the street, playing with long exposures, or searching for hidden photogenic spots, before going out to concerts at night.

In the spring, Simms took a class that focused on taking portraits, so his attention and interests shifted yet again. He utilized the locations he had found exploring the city to accompany his portrait assignments. Utilizing his setting and props in unusual and unexpected ways outside of their intended purpose, is one element of his photography Simms prides himself on. He said that for him, when a person looks at his photos and is unable to guess where it was taken, or if it was done in a studio or not, that is a mark of a good photo.

“To transform the setting is way cooler, I think, than to just come in and be like okay, just stand right in front of that wall right there,” he said.”

Although he is a criminal justice major, and Towson does not offer a minor in photography, Simms has not felt discouraged from enrolling in photography classes.

“I have learned more from real life experience,” Simms said of his photography, “But I became a better photographer from class.”

For now, Simms plans to continue to individually explore his interest in photojournalism, and look for stories that are both “super low key” but “super powerful at the same time” that he can tell on his own in a non fabricated way.

“Go with the flow” are a few words that Simms strives to live by, and that he said were personally reinforced for him when he covered the unrest in Baltimore. Having lost his job about a month prior, he said that he wouldn’t have been able to cover the situation for five straight days if he had needed to go to work.