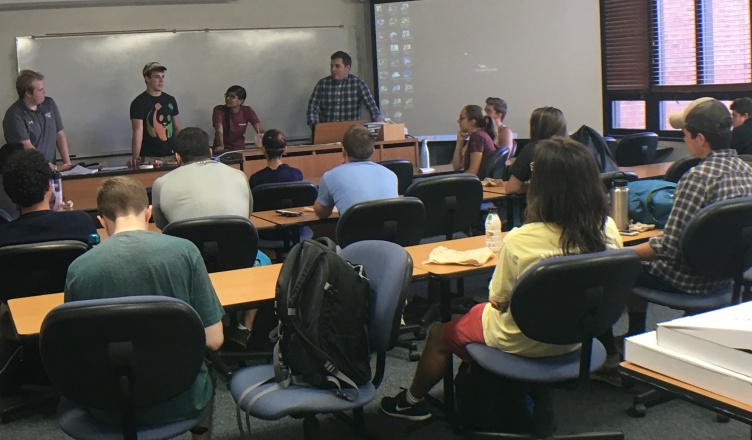 Towson University’s chapter of the Society of Physics Students won the Marshal W. White Outreach Award for the second consecutive year for its outreach programs in schools and the community.

Senior and SPS president Sean Spencer said the chapter runs outreach programs such as “Science After Hours.” As part of that program, members go to schools and academies, like Wolfe Street Academy in Baltimore, every Friday to help get people interested in science.

“Basically our science project program is our premier outreach program,” Spencer said. “We’ve set it from the ground up, and it’s gained a lot of attention, at least from our national organization. They’re using it as a model to build their guidelines for how other chapters will set up their outreach programs.”

Spencer said SPS has used the money from the grant to buy materials and supplies for kids and do demonstrations for them.

“There was one kid, his name was Trevor.” Spalding said. “He was my favorite. He was a little tiny kid who was obsessed with everything. He knew everything about science and he would always ask me like a thousand questions every time. I actually felt like I was helping a kid.”

In addition to continuing to push “Science After Hours,” senior and SPS communications director Hamna Ali would like to start getting the group more involved with the rest of Towson’s campus.

Ali suggested collaborating with organizations like the Women in Science Club or the Geology Club to make SPS “more of a presence on the campus.”

Along with outreach, the SPS strives to be inclusive. With many women active in SPS, both on and off the executive board, there are hopes that more women will begin to get involved in science.

In the Jess & Mildred Fisher College of Science & Mathematics, 45 percent of students are women, according to 2016 enrollment data.

Ali said that the presence of female scientists in Towson’s science department is encouraging for women working in scientific fields.

“Something that keeps girls in the major is that we do have really great female faculty. They’re all doing some hardcore research,” Ali said.

Vera Smolyaninova, a physics professor, highlighted the importance of encouraging women in the field of science.

“I always point out in my classes that some of the most profound discoveries in the history of science are done by women,” Smolyaninova said. “Yes, we can do science and excel in it.  But why should we do it? Because to understand how this incredible magic that we call science works is absolute fun!”

-Marcus Dieterle contributed to this story.