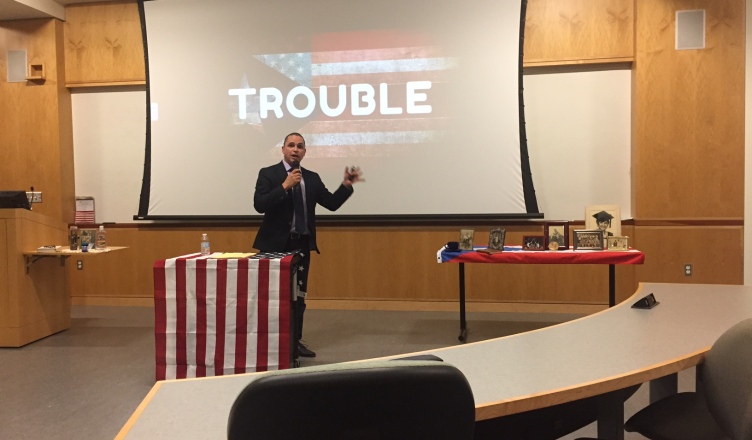 Poet, novelist, storyteller and professor Javier Ávila presented his journey as an American Latino and how he has struggled with that identity at Towson University on Oct. 9.

“I was white, in Puerto Rico,” Ávila said. “Because in Puerto Rico if you have this skin tone or lighter, you are considered white and no one tells you that you’re not.”

Ávila taught English at the University of Puerto Rico for eight years until he moved to Pennsylvania and became a professor at Northampton Community College.

Ávila didn’t realize he wasn’t white until he moved to Pennsylvania and someone told him that he was actually seen as brown. Even after that revelation, he still felt he was the same person with the same value.

“Race is a fallacy,” Ávila said. “It really is a concept created to keep us apart.”

Ávila has published 13 books, including poetry anthologies and novels. His bestselling novel “Different” became an award-winning motion picture entitled “Miente,” which was screened in over a dozen countries.

After 10 years in Pennsylvania, Ávila put together his personal experiences and views of race, culture and what it means to be Latino in America into a one-man show called “The Trouble with My Name.”

During his talk at Towson, Ávila engaged the audience as he told the story of his life and read his original poetry delivered with his satirical sense of humor.

Ávila grew up with a bilingual education. He spoke both English and Spanish, and he didn’t have a strong accent.

Ávila has experienced situations where people were surprised to hear how good his English was just because of how he looked. When he spoke Spanish around people who didn’t, he felt like he was seen in a completely different way.

As a minority, Ávila battled others’ view of his name, physical appearance and accent.

In the show, Ávila recited poems and stories of his family, and how important they all were to him. He said that if he had to pick a favorite, it would be his grandmother who had been part of the Puerto Rican Independence Movement.

Ávila said the FBI illegally followed his grandmother for years everywhere she went, even while her three sons were fighting for the U.S. — just because she was Puerto Rican.

Ávila, who only knew her as his loving “abuela” — or grandmother in Spanish — who cooked rice and beans for him, didn’t find out about her history until after she had died.

He also mentioned the he is inspired by his mother, who was the first in her family to go to college.

Ávila’s mother, a retired public-school teacher in Puerto Rico, was the main reason Ávila decided to become a teacher. His poem “Teaching Statement” is a tribute to her.

Ávila also talked about his beloved father. His father and two uncles had fought in Korea with the U.S. Military.

Ávila’s father was part of the “Borinqueneers,” a segregated unit composed primarily of Puerto Rican soldiers.

Later on, Ávila’s father was awarded the Congressional Medal of Honor for his time as a fighting soldier. Ávila learned a valuable lesson about change over time from his father’s experiences.

Sophomore James Morton enjoyed the way that Ávila presented his and his family’s experiences as Latinos.

“It was a refreshing take, with humor and poems, on the struggle within the Latin American community,” Morton said.