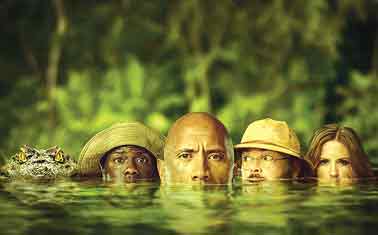 Sealing off a year of powerhouse sequels, reboots and remakes, “Jumanji: Welcome to the Jungle” serves as an unlabeled, wistful placeholder. It is not exactly a sequel to Robin Williams’ hit “Jumanji”; it is not really a reboot and it certainly is not a remake. It is, however, the Christmastime family feature designed to send sleep-deprived parents and their gift-wielding children to theaters for a couple hours of long-overdue silence. With little more purpose than to entertain, this is the kind of show that throws the names of both a classic rock song (which will blow out the speakers during the end credits) and a campy film into its title so that the ’90s teenagers who now have their own kids can feel those nostalgic goosebumps.

This description labels the new Jumanji as a cash-grab picture, and in a lot of ways, it is – I have never known Jumanji to be in the “what deserves a sequel” conversation. But at the same time, it is fun enough and entertaining enough to make the audience feel like they have participated in a mutually beneficial transaction.

The film makes a slick transformation to suit its millennial audience – the Jumanji game itself literally converts into a video game after a boy, whose father finds the original, old-fashioned board game on a beach, refuses to play it. The differentiations between the old and the new are bountiful to say the least, and the fact that this unique approach to a second installment is enjoyable at all must be accredited to its four stars, who fully carry the weight of writer-director Jake Kasdan’s story, which is not much sturdier than the one from the 1990s video game their characters get sucked into.

The protagonists include Spencer (Alex Wolff), a soft-spoken nerd; jock and Spencer’s ex best friend, Fridge (Ser’Darius Blain); Bethany (Madison Iseman), whose selfie-obsessed teen attitude screams laziness; Martha (Morgan Turner), the reserved rebel who tells off her gym teacher; and Alex, who is introduced in the film’s 1996 prologue as not only the video game’s first victim, but also the “boy who went missing,” which Robin Williams’ character once was. After the four end up serving a Breakfast Club-like detention sentence, they discover the dusted-up game console, which has somehow ended up in the high school’s basement, and just as any group of kids would do with time to kill, they decide to try it out.

Now this is where ‘Welcome to the Jungle” loses most of its relevance to its predecessor. Whereas the 1995 film sees the malevolent elements of the game manifest themselves in the real world, this one has the characters fall into the world of the game, taking the shape of the avatars they’ve chosen; they include Dwayne Johnson as the pencil-armed nerd, Kevin Hart as the football star, a half-dressed Karen Gillan as the shy non-athlete, and Jack Black as the phone-dependent, stereotypical girl. Nick Jonas plays the long-lost Alex, who, when our virtual heroes meet him, is stuck on his last of three lives, and is not aware that he has been stuck in the game for twenty years.

As for their in-game objective, there is not much more than “find a thing,” “return the thing to its rightful place,” and “relinquish the curse.” Simple stuff neither audiences nor the film spend much time worrying about. Rather, the enjoyment lies in watching these iconic stars with their iconic personas playing around with a body infested by the soul of a completely opposite person. Black is obviously the most notable example of this, as the Bethany inside of him shrieks in horror at the sight of his reflection in the water. Another great moment takes place as the macho-man Johnson tries to bottle up his fear, repeating “don’t cry, don’t cry” aloud over and over again.

Black and Johnson are the highlights of this film precisely because of the conflicting personas their characters have inside of them, and the Gillan character works because it allows the awkward girl inside of her to blossom into a kickass confidant. Watching the round and rambunctious Black teach her how to be sexy is outrageous. But the Hart character, whose variations include a shortage of height and a lack of strength, is the most like its portrayer and is thus the stalest of the bunch. Not to suggest that Hart, whose comedic abilities need not be questioned, is not funny, but jokes are much better the first time around, and a lot of the ones here can be found in some form in the majority of his filmography or list of comedic specials.

The video game setting allows for a variety of amusing antics. For example, early on, the characters’ three lives can make horrendous deaths inconsequential, and thus, amusing.  At other times, the lives are also used for strategic and honorable purposes. However, the suspense is steadily amplified as the meter, portrayed by a set of three fading tattoo tallies, winds down. The fact that the game has levels which increase in difficulty provides a spectrum of foes, ranging from hippos and rhinos to motorcycle goons and the evil Van Pelt (Bobby Cannavale), the film’s villain. I can honestly say that I did not expect to ever see a video game cutscene in a movie, an intriguing tribute to the video game narrative, but an element Jumanji could have done without.

There is not much urgency to anything the characters endure.  At one point, one of the four characters kills another just because the victim could spare the life. But whatever. It is all in jest, anyways. This film succeeds in what it needs to succeed at, and supplies more than enough laughs for us to sustain and forgive a few bumps here and there.