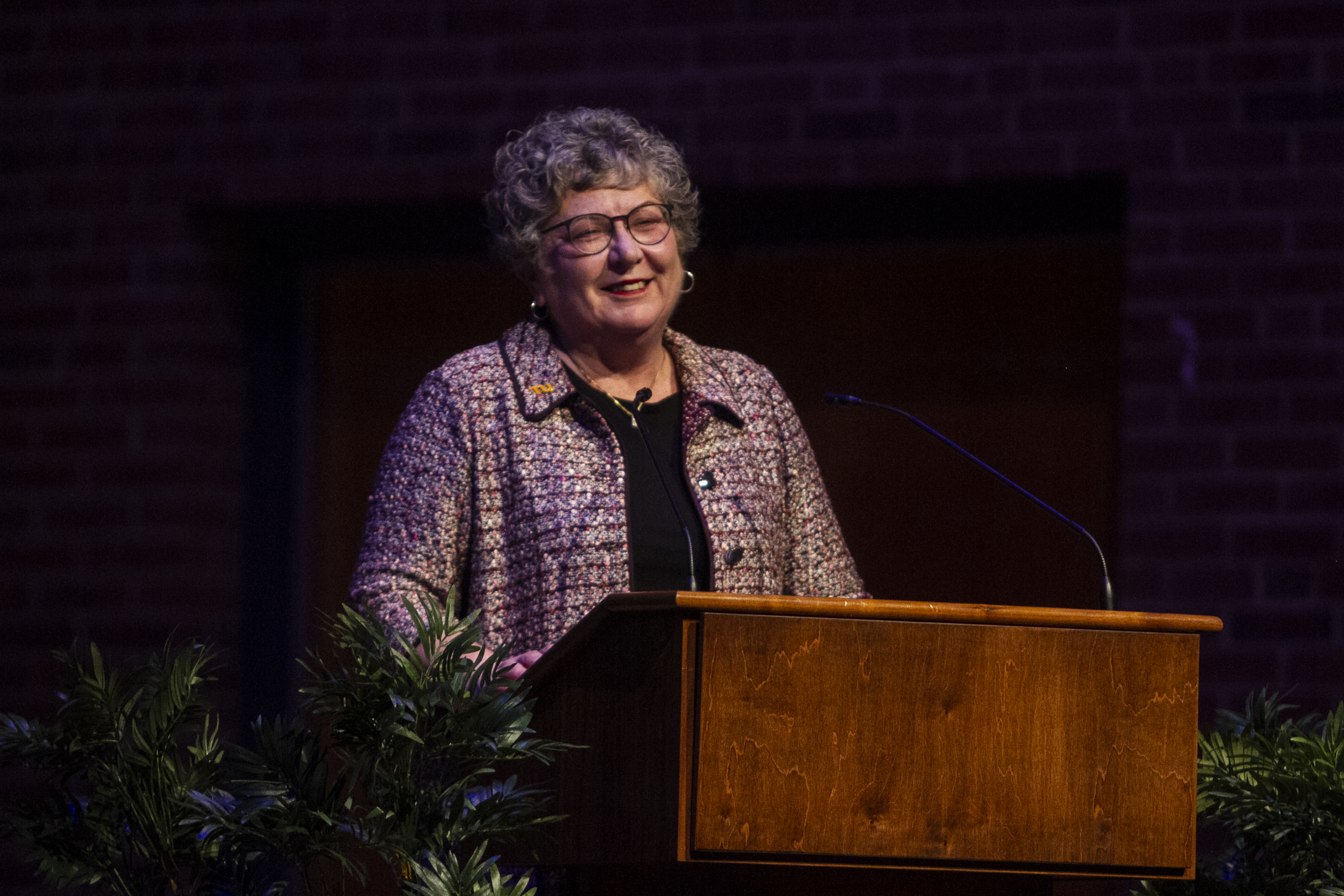 Towson University President Kim Schatzel talked about the University’s future, including giving some construction updates, and praised students and staff during her presidential address Nov. 12.

“It is a great time to be a Towson Tiger,” she said. “TU is a university on the move with great momentum and it is evident in so, so many ways.”

In a 37-minute speech, Schatzel shared highlights of the University’s progress, honored faculty members for achievements in their field and thanked donors for their support while putting forward the University’s plans for the future. The recent accolades given to TU were not lost in Scahtzel’s address, as she praised the recognition Towson University has been receiving.

“TU continues to achieve recognition from the major national ranking services in higher education,” she said. “This past year, Towson University was listed as one of the top public universities in the nation by Forbes Magazine.”

The university’s first-ever placement in the top 100 public universities by U.S. News and World Report’s 2020 Guide to Colleges and Universities was a point of pride for Schatzel.

“This new top-100 ranking truly reflects a University on the rise and points to the excellence of our academic programs, our faculty, facilities, and TU’s commitment to world class research,” she said.

Schatzel also provided an update to the current construction on campus and announced the next steps in the University’s transformation. With the new science building still on track to open in the fall 2020 semester, Schatzel discussed the creation of a building for the College of Health Professions.

“Both planning and design funding have been secured by the state,” she said. “This new building will soon be taking shape, anchoring the northeast side of campus, toward downtown Towson and is expected to open by the spring of 2024.”

Schatzel gave an update on the Dr. Julius Chapman Quad that is replacing the now-demolished Stephens Annex.

“Next fall, the space where the Stephens Annex once stood will become the Dr. Julius Chapman Quad, a most befitting renaming for a space that will become a place for students, faculty and staff to gather together,” she said.

Schatzel also discussed the opening of TU’s first business engagement center, which will replace the armory on the corner of Washington and Chesapeake Avenues in uptown Towson. Expected to open in the fall of 2020, this building will be known as “The Start Up” for its ability to connect executives and entrepreneurs to TU’s programs.

“This will be a business-first space where leaders will network and connect with peers and accelerate their business ventures, find their next strategic hire, develop new solutions for pressing challenges, attract investment and showcase their businesses,” she said. “It will become a one-stop experience that will raise the bar for successful University business engagement.”

“I think that’s a great idea,” said Thomas Dacruz, a freshman business student. “Connecting students to real world businesses and stuff that they could actually use after their career at Towson.”

Schatzel also announced the purchasing of a 12-story building on 401 Washington Avenue. Schatzel said the building will be used for non-academic University functions to free up space on campus.

Schatzel congratulated faculty members for their hard work and success, including Jayne French from the Center for Student Diversity. French was recently selected by the University Systems of Maryland’s Board of Regents to receive their highest honor for her impact in inclusion, multiculturalism and diversity.

French is the first person to receive two staff awards from the Board of Regents.

Schatzel also announced the plan for differential tuition for the College of Business and Economics and the Departments of Nursing and Computer and Information Sciences. Differential tuition is an increase in a student’s tuition based on the programs they are studying.

“It makes sense,” Dacruz said. “If you’re in a harder program, it requires more resources so I think it makes sense to pay more tuition.”

Schatzel stressed that no students currently enrolled in these programs will be affected by this decision.

“The differential tuition will be phased in over three years and will not impact any students that are currently enrolled in these programs,” she said. “The total revenue from these differentials will go back to these colleges and provide funding to continue the requisite investment in faculty facilities and support.”

“The school of business and economics could be improved so to see them allocating resources based on the students that are in the program, I think it works,” Dacruz said.

Schatzel thanked TU’s donors for a record year in fundraising, as the University received more than $14 million in gifts, a 34% increase from last year.

With the University undergoing changes on campus and the enrollment increasing each year, Schatzel views Towson University as an institution on the rise and is excited for the future.

“Our institutional momentum and our historic investment being made on our campus can be seen in the work we are doing together each and every day,” she said. “Each and every day, remember, there is much to be proud of at Towson University and, working together, there are indeed great things ahead. 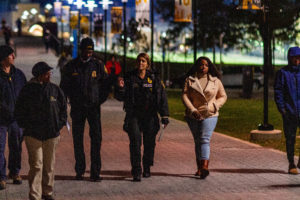