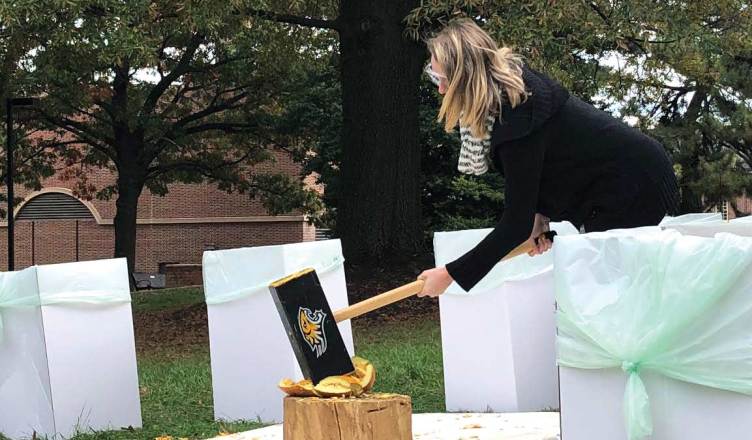 What better way to relieve yourself from mid-semester stresses than to break open pumpkins with a giant wooden mallet? Towson students did just that Oct. 26, at the third annual Great Pumpkin Smash event held on campus.

The event, put on by Towson’s presidential ambassadors, was held at the Beach in front of Cook Library from noon to 3 p.m., where students and faculty could donate $5 to smash a pumpkin. According to Jenny Buchanan, one of this year’s presidential ambassadors, the activity was not only a way to help students release stress after midterms, but also to encourage students to give back to Towson University.

“For a $5 donation, you can smash a pumpkin and your donation goes to the Towson Fund, which is a fund that they take money from to do projects on campus,” Buchanan said.

The donations will go to the areas and groups of Towson’s campus that need the most funding.

“The donations are unallocated, so the money that we raise here can go to anything on campus,” said Joanna Morganelli, another presidential ambassador who helped run the event. “What we do as presidential ambassadors is encourage students to practice philanthropy and donate back to the University. Towson really thrives on student donations.”

Student Philanthropy Manager Conor Reynolds from the Office of Development expanded on this.

“Without state funding, we’d only be able to operate a certain number of days in the week, with tuition and donations,” Reynolds said. “Even though we are a state institution, private donations are essential for us to continue operating.”

This is the third year that the Great Pumpkin Smash event has been held. In the past, there were guest appearances by the deans of the colleges and Doc, Towson’s mascot.

The ambassadors shared that their overall goal is to educate students about philanthropy while hosting a fun fundraiser, and some Towson students felt that this was the perfect way to do both.

“It was so much fun,” said Amanda Bendel, a psychology major. “It was nice to get your stress out, especially with midterms being over and it being homecoming week. It’s a good event to get to know more people.”

Celeste Kagarise, a math major with a track in secondary education, also had a good time at the event.

“I really enjoyed it,” Kagarise said. “It’s not everyday you get to smash a pumpkin, but it was a good way to end a stressful week, for sure.”

The ambassadors hope to continue and grow the engagement the event brings, and plan to hold it again next year.