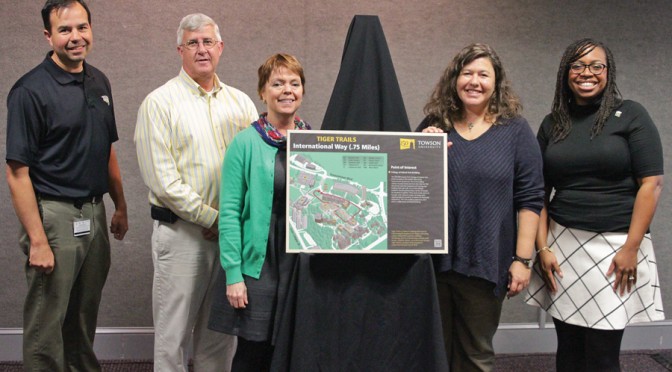 On Friday, Oct. 2, the President’s Leadership Institute class of 2014 unveiled “Tiger Trails,” a system of four running and walking trails throughout campus created to encourage health and wellbeing within the Towson community.

The four routes are between three-fourths of a mile and 2 miles long, each displaying a different part of campus.

They include International Way, a wheelchair accessible path with no obstacles, the Heart of Campus Trail, leading through the busiest parts of campus, the Normal School Trail, displaying the historic sites on campus and Johnny Unitas Pass, highlighting Towson’s sports complex.

Tiger Trails was the product of a yearlong leadership program designed for faculty and staff from all departments to come together to improve their leadership skills, and to develop contacts from other campus divisions.

Another component of the President’s Leadership Institute is that each class must design a project that will be of benefit to the university, not just now, but far into the future. The class of 2014 chose to create Tiger Trails as a way to not only promote fitness, but to establish pride in Towson’s campus.

Director of Communications and Media Relations Ray Feldmann, who is a member of the 2014 class, described Tiger Trails as “something that would forever be a part of the university landscape, literally and figuratively, as well as something that would promote a little bit of team and school spirit, and maybe even some community engagement.”

Feldmann went on to describe the group’s commitment to honoring President Emerita Maravene Loeschke’s emphasis on wellness and fitness.

The class partnered with Campus Rec to complete the project. From now on, Tiger Trails will be incorporated into their program offerings.

While the heavy rain kept the event indoors, Pace, also a member of the President’s Leadership Institute class of 2014, joked that “the irony that we are inside today as we present a resource that exists outside is purely meant to heighten your anticipation.”

“We believe that a productive and vibrant campus is one that is both collaborative and healthy,” Pace went on say. “To accomplish this goal, a resource that fosters the wellbeing of community members and guest, while exposing the beauty and growth of the university’s campus seemed ideal.”

Chandler opened his remarks by congratulating the class of 2014 on their commitment to support a healthy campus community.

He praised the collaborative efforts of the Leadership Institute, saying, “the institution runs so much more effectively when people know each other across divisions rather than just within divisions.”

Chandler continued by thanking the class of 2014 for setting a high example of leadership for the President’s Leadership Institute, saying that he “will be delighted to put on [his] rugby kit and go run these trails.”

Sheffield expressed his excitement for Campus Recreation to carry on the initiative with the President’s Leadership Institute.

“We are honored to take this on,” he said. “We will ensure that not only those who are here today, but those in our future, will be able to cherish this great project.”

Both Chandler and Sheffield challenged the community to increase both their fitness and cross-departmental communication through the future.

“We now have the opportunity to gain fitness and see our beautiful campus on a daily basis,” Sheffield said. “Partner up right now, grab a lunch buddy, and get out and walk.”