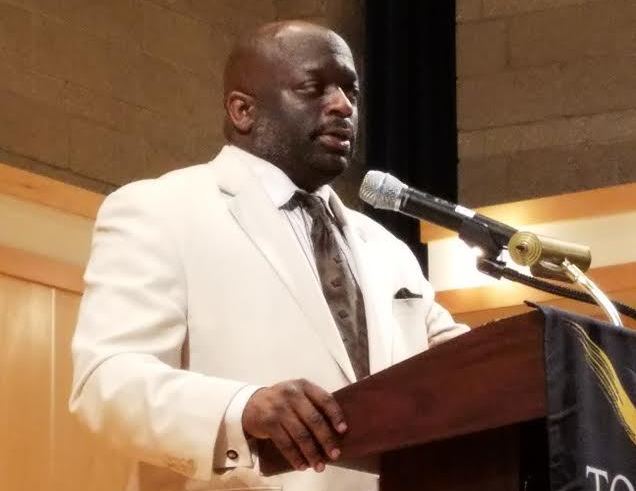 Journalists and their credibility have been under constant fire since  President Donald Trump’s political involvement began, but the assault on a free and independent press is nothing new, says National Press Club President Jeff Ballou.

During an April 27 speech delivered as TU Journalism Day’s keynote lecture, Ballou, a journalist with Al Jazeera English and NPC’s first black male president, recounted some of the ways journalists have been treated unfairly under the current administration and even further in the past.

He said images like that of a Trump supporter wearing a T-shirt that read, “Rope. Tree. Journalist. Some assembly required,” at a rally last November are indicative of the threats that journalists have and continue to face.

Ballou said that Trump “likes being in front of the camera” and tactically uses the press to his advantage.

While Trump has publicly tried to discredit news sources by crying “fake news” for example, Ballou said the president has also tipped off reporters to key information.

“Something is either fact or it’s not,” Ballou said. “Calling something ‘fake news’ is frankly an oxymoron. It’s either news or it’s not.”

While journalists do occasionally make mistakes, Ballou said those errors have been amplified in a way that is used to blanketly discredit the press.

“If you make a mess, clean it up, apologize and do better,” he said.

Ballou urged journalists to combat the idea of “fake news” by simply referring to their First Amendment rights as members of the press.

“This is a copy of the Constitution,” he said, pointing to his personal, pocket-size copy. “Your job description is in here.”

Ballou also encouraged journalists to join a press freedom organization, such as NPC, where they can find like-minded people who understand what it means to be a member of the press.

Camara believes that the current political climate is not a whole lot different than it has been historically. She said journalists today probably have even more power now than in the past.

“The climate’s probably going to be around this same type as it’s always been,” she said. “Journalists always get opposition from somewhere. It’s just not as visible in other administrations as it is right now.”

From exposing the lead contamination in the water in Flint, Michigan, to celebrating the work of first responders, Ballou said he’s still confident in the current state of journalism.

“I am an optimist,” he said. “I’m going to say ‘truth is not dead. Far from it.’ Because I see great journalism everyday.”

But, he said, journalists should brace themselves for the next four years.