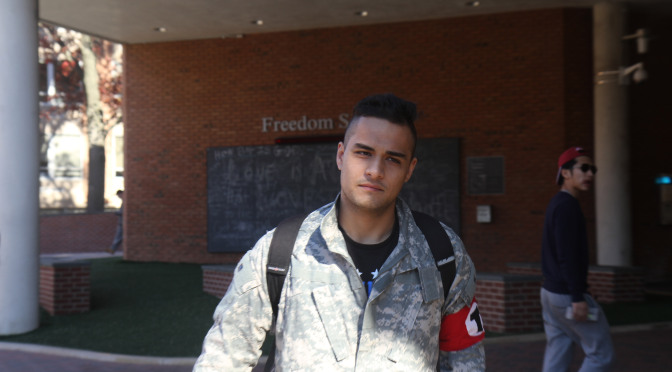 What was billed as a rally to support “Trump,” “Freedom,” “Constitutional Rights” and “this Great Nation,” never fully materialized Tuesday afternoon, but instead dissolved into a handful of confrontations and dialogues.

A Twitter account, @TU4TRUMP, called for students to gather in Freedom Square at noon and, apparently, was able to send out a mass-email advertising the rally to a large portion of the University community.

The person or people behind the Twitter handle have chosen not to identify themselves, despite multiple requests from The Towerlight. Nobody at the gathering claimed responsibility for organizing the event.

Everyone Who Attended: Thank you all! We will have another Rally again. The organizer wasn’t named to keep that person safe. #TU4Trump

In a message on Twitter, someone operating the “TU4TRUMP” account said they wanted to remain anonymous because “standing behind this would put my career at risk/ future career.”

Towson officials said the Office of Technology Services is investigating how the Trump supporters were able to send out an email to so much of the campus. It was clear early on that a large gathering of counter-protestors outnumbered anyone who was in Freedom Square to rally behind President-elect Trump. One supporter made himself conspicuous when he walked into Freedom Square wearing a camouflage jacket and a red armband with a black “T” inside a white circle. While the student wearing the armband said that it was not at all meant to be symbolic, but just to show support for the president-elect, it did not take long for other students in Freedom Square to accuse him of Nazism. The student wearing the army jacket and armband proved his identity as a Towson student but did not want his name to be used. The red armband with the black “T” in a white circle, the student said, was not inspired by decals worn by Nazis, but was something he saw in “political cartoons.” The student said he voted for Trump because, “he just seems like he’s going to fight for my interests, for my people, what we need.” “It actually makes me feel empowered,” the student said. “I feel like I’m not some random outsider anymore. I feel like a person that has a voice now.”

Many students at the rally confronted the student about his choice of outfit—from criticizing him for wearing an army jacket (the student himself said he never served) to denouncing his armband as a Nazi symbol. Student Government Association President Taylor James said it was “terrifying” to think that someone was so comfortable walking around campus wearing a symbol that, in her view, signified hatred. “That was like chilling, to know that he was that comfortable to walk around knowing how scared he was making people feel,” James said. Ray Feldmann, a spokesman for the University, said, “under existing case law, wearing an armband is not disruptive to a school’s educational process. Therefore, the First Amendment protects the right of the student to wear it.” The University did not offer further comment.

This student, who didn’t want to be named, says that his armband is just to support Trump, not a symbol–Nazi or otherwise. pic.twitter.com/PkInMoxZER

After seeing tweets from Towerlight staff about the student, several people have reached out to The Towerlight with claims that they have seen the student wearing the armband in other dicey situations on campus.

Sarah Kuczinski, a Towson student who identified herself as a former classmate of the student wearing the “T” armband, said she she saw him get “visibly angry” during a presentation she gave in class and that he “stormed out” at the end of that class one day last semester.

Other students have posted online about their run-ins with the armband-wearing student but have not directly contacted The Towerlight.

Zack Stuehler, director of the Student Trump Coalition at TU, said in a Facebook message that he “100 percent” disavowed anything “resembling the Nazi-regime.”

As the crowd began to grow, some students attempted to address the entire group. However, as nobody had claimed responsibility for organizing the event or worked with University administration to clarify what was occurring, TU administrators worked to stop students from addressing the whole crowd.

Vice President for Student Affairs Deb Moriarty said she acted in accordance with Towson’s “Time, Place and Manner” policy, which regulates where “expressive activity” can take place on campus.

“Because somebody had planned a specific event [in Freedom Square Tuesday,] what I was trying to do was not to start a rally that was not planned,” Moriarty said. She added that the policies the University have in place are there, in part, for students to figure out “how to have a successful event” and to keep everyone safe.

The crowd thinned as time passed and nobody stood up to take responsibility or to speak, but several students gathered and clumped together.

Some students took it as an opportunity to support a student initiative to designate Towson as a “sanctuary school,” while others began to actively engage with each other in conversations about the political climate.

“Today we handled ourselves very well,” James said. “There was an exchange of ideas and lots of conversation. This isn’t necessarily what people thought was going to happen, but I’m proud of the way the situation was handled by the students.”

Eventually, James and other members of the SGA essentially wrapped up the gathering by saying they thought the conversations were no longer being productive. 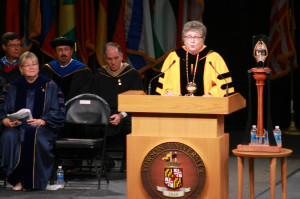