After 20 years of set designing for the Everyman Theatre in downtown Baltimore, Towson University professor Daniel Ettinger will have partaken in another successful production with his upcoming design for “The Revolutionists.”

Ettinger has been designing sets for 43 years for over 260 productions so far.

“I saw a touring show in my hometown of Springfield, Missouri, when I was in grade school, and I was hooked from the very beginning,” Ettinger said. “Really, except for a brief career as a waiter in New York, which everybody does, it’s all I’ve ever done.”

At this point in his career, Ettinger has designed for around 60 productions for the Everyman Theatre, his most recent being “The Revolutionists” which runs from Dec. 6 to Jan. 7.

“The Revolutionists” is about four smart, strong, struggling women arguing about politics and feminism, all in the framework of 1793 and the French revolution. Although it is a period piece, it is filled with all sorts of modern language. Ettinger praises this play for its relevance and timelessness.

“With all the things that are being talked about in the news lately, it just comes roaring into the headlines,” he said.

In addition to being excited about “the new voice in the building,” new director to Everyman, Casey Stangl, Ettinger has also been excited about all of the new technology this play will introduce. In collaboration with the other designers, the team has managed to make this set literally come to life.

“We are inventing the technology to do what we want to do, it’s one of the exciting things about working here at Everyman,” Ettinger said. “Scenery is moving in this show and it’s all being handled by motion control motors rather than people backstage pushing on things. It’s exciting to get to work with things like that.”

After 20-plus years of freelance work in New York, Ettinger decided it was time to begin teaching, as he always intended to do. The first job he applied for was right here at Towson University, exactly 20 years ago. Needless to say, he got the job.

“I just reached a point where I knew I had always wanted to teach,” Ettinger said. “My family are all university professors and it was something I knew I had wanted to do. I have to say, Towson is sort of a perfect sweet spot of a size of a university. Big enough that it has almost any resources that students on campus might like to have, and small enough that there is still a chance that they can be involved in the programs they want to be involved in.”

“He’s a lot of fun,” he said. “He can really connect with his students because he really has the same attitude that students have…. If I have an issue, he’s so good at explaining it to me in a way I can understand.”

For Ettinger, his class is a time for students to explore their creative process, even when the product doesn’t work out as they expected.

“I try to impart to my students that the work they’re doing for me in design classes is their opportunity to just take a risk and try something,” he said. “Yeah, we all want to strive for really good work, but in teaching I’ve tried to share with my students that I’m more interested in them taking a risk, maybe even having something not work, as long as at the end of the process they can say to me, well I tried this and it didn’t work and here’s why I think it didn’t work.”

Through his abundance of experiences, Ettinger has come to learn quite a few things about theatre and its production.

“If I see work I really admire it makes a me a little crazy with a little envy or jealousy,” he said. “But I’ve learned that theatre is a world of collaborative artists. Almost anywhere you go, if you can do the work, you’ll find a home amongst people, and it’s really great. I’ve been very blessed.”

To see Ettinger’s work in real life, tickets to see “The Revolutionists” can be found on the Everyman Theatre’s website for as little as $10. 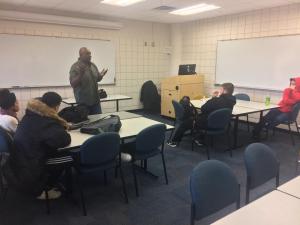 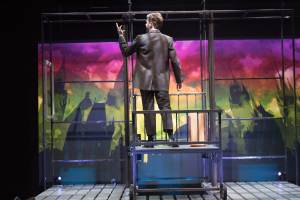