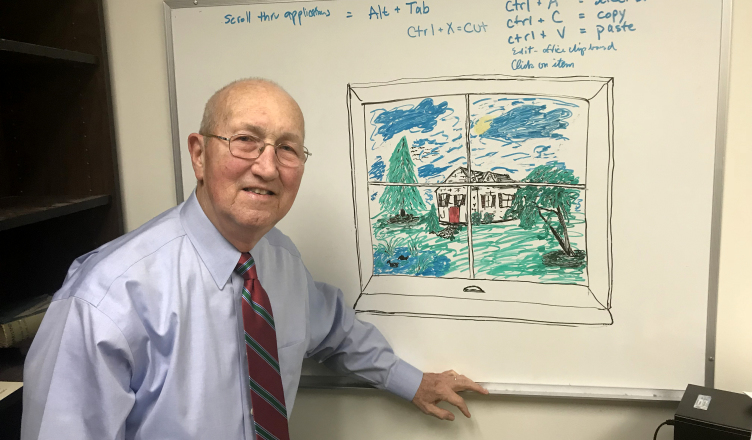 Don McCulloh, a professor in the Department of Business, will be retiring at the end of this semester after being part of Towson’s campus for 48 years. McCulloh, has been a member of many departments on campus including different positions in administration. The Towerlight had the chance to speak with McCulloh about his time as a part of Towson’s community. This interview has been edited for brevity and clarity.

How long have you been a part of the faculty here?

When I came here, I was hired in the division of business finance, and my first job was in this building [Stephens Hall]. That was Sept. 29, 1969. I worked in the administration from 1969 to 1997. The last 18 years of those, I was vice president for administration and finance. That was when I did retire.

At that point, the president offered me an opportunity to teach, as a lecturer in the school of business and economics. So, I’ve been here since 1997 to the end of this year, 2018. I think all together it’s a little over 48 years of time with Towson University.

When I came here I was hired as a budget analyst, working in the vice president of business and finance’s office. I was Director of Auxiliary Enterprises and was project manager on the construction of the University Union and he appointed me to be the assistant vice president for the business office, for all the financial operations at the University. He appointed me to various jobs in about a 10-year period, and I really earned my skills that way.

In 1979, the vice president for business and administration job was vacant here. I really knew the job… the president asked me about recruiting for the job. I said in essence ‘Well I’m the most qualified for the job.’ Not being smart about it, but I just felt I learned so much. About a week later he appointed me to the job. So, from 1979 to 1997 I was vice president for business and administration.

I was proud of one, from a leadership perspective, I trusted everyone of them and they trusted me, we became friends and we really enjoyed comradery and work. If I were to receive an award, I would receive it as my position. The person who did the work and earned it, I would take them along with me and have them go up to receive the award. I let them keep the awards or trophies in their offices. My whole philosophy was to know my people, work with my people and be friends with my people.

What are some of your biggest accomplishments here?

Let me run down the facilities that I played a big role in.

I acquired, meaning the University bought but I did the negotiations with lawyers and everybody, the new Administration building we have. I acquired the building where the math department is. I acquired the Berkshire. These are people who came to me and asked if we were interested in acquiring their properties.

I also had built and negotiated with the builder the four high-rise ABCD buildings, the dining hall attached to that and the bridge that goes across the Glen area. Interestingly enough, we didn’t want to take down any trees because it’s a very sacred property in there. So, I had the builder figure out how he could angle that walkway around there. I think he took out one branch but didn’t cut down any trees.

I had a hand in procuring the ability to build the daycare center. Employees and whatever could take their little guys up there to be safe, so the parents knew where they were.

I didn’t do all this by myself, I had great support from the people in my organization, and also from the Board of Regents.

How has Towson impacted you and your family?

I went away to college, I went to the Citadel, down in South Carolina, the military college. I went into the United States Air Force after college and served during the Vietnam period. I got out, I went to work with the General Motors Corporation and worked there for five years. I got out, applied to Towson, and was interviewed, and I’ve been here ever since.

Towson is a fantastic institution. When I got here, the business school wasn’t even a business school. You must give the institution a lot of credit to make this school what it is today, which is what I believe is a top-notch undergraduate program.

I was totally welcomed when I came over, this is my office. I didn’t have a window, so I drew one with magic markers, 15 years ago or so. I’m going to be sad when I can’t take it with me. I like to do those things, and I like to draw and so I’ll be doing some of that.

What has been one of the most satisfying parts of working here?

The most satisfying part of working here is the classroom. I really like being in the classroom and teaching the students and participating with them. The teaching part, I love that. In that sense, I hate giving that up.

What is a fond memory that you will carry with you?

I think my finest memory would be the people I worked with and the things we achieved to help make this institution, facility wise, I’m very proud of those. It could not have been done without the people that I had working for me.

Although they worked for me, we were friends. And because of that, we accomplished a lot of stuff together. I would not trade it for anything else.