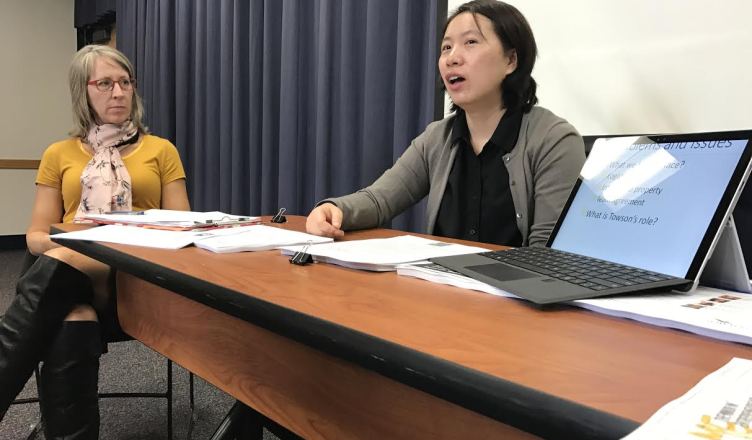 The single biggest setback when starting a new business is securing funding, according to assistant computer science professor Ziying Tang.

“Whether you share your ideas with an [existing] company or you build your own, money is the biggest problem,” Tang said.

From there, during the Feb. 28 portion of the weeks-long Entrepreneurship Unplugged speaker and workshop series, Tang showcased the application she and her team have designed to ease the learning of basic skills for people with autism.

The app hasn’t passed the funding and commercialization phase yet, but as Jan Baum, director of the entrepreneurship minor, says, setbacks are learning experiences.
“All of the stories are really valuable in terms of what they did,” Baum said.

During the talk, Tang outlined many companies and funds available to students who wish to start their own business, including TEDCO, who provides framework, knowledge and funding to entrepreneurs and start-ups.

In addition, a number of state and federal funds can be approached by students: the VOLT fund, which uses revenue from Maryland’s casinos to create loans for entrepreneurs and small businesses, the National Science Foundation and the U.S. Department of Labor.

ITNOVA, an Annapolis-based software company, funded Tang’s app and provides funding and services for those with technology-based ideas.

Tang also focused on drafting a standard non-disclosure agreement, or NDA, to protect one’s idea from being stolen and developed by funding companies. An NDA prohibits the funding company from developing someone’s idea without permission, even if they no longer accept funding from the company.

So, for example, even though ITNOVA knows Tang’s team’s idea, they can’t develop it independently.

Tang also spoke to students about the various aspects of commercializing their ideas, such as knowing your market and recognizing your target users.

You want to have all the knowledge there is to know about the current market, Tang said.

“You want to validate the idea with users,” Baum added.

Tang also stressed the importance of researching academic journals for ideas for businesses, which are available for anyone to access.

Academic journals contain published research from professors from each university, and entrepreneurs scour this research to gain patents on future products.

“[Academic journals] are where the idea comes from,” Tang said. “And those ideas can become a product, and those products can become a business.”

Tang highlighted the importance of teamwork to ensure that a team is on the same page in terms of logistics, intellectual property and NDAs and market knowledge.

“She was very honest and truthful about her experience,” student Mikaela Walker said.  “I’m definitely going to take some of her experiences and apply them to my work…. The main takeaway is that it is important to build a successful team.”