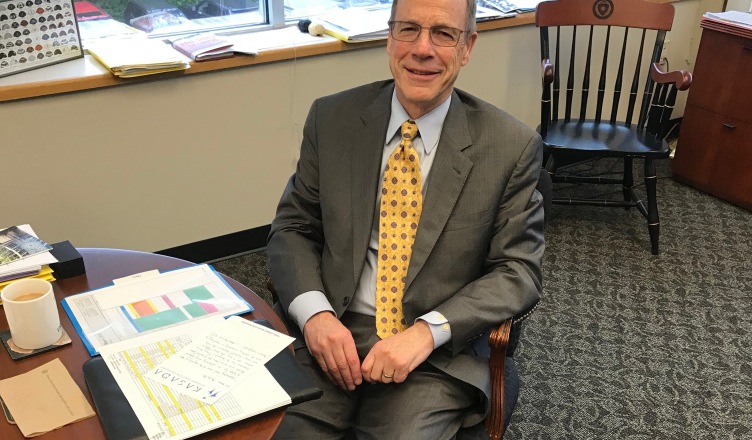 How long have you been at Towson University?

What are some of the biggest changes you’ve seen in your time here?

We have obviously just continued to grow. The big dig, the science building, the big hole in the ground here is a big change. We’ve been working very hard for more than 10 years to get that building up and running, and we finally have a hole in the ground.

That will be a huge change. Burdick is a huge change, and the thought that the Union will look very different in two years’ time. The physical changes have been coming and we’re beginning to see what that means now. That’s indicative of the growth that’s been going on. I think we continue to attract high quality students, high quality faculty. There has been some great continuity of effort.

It hasn’t all been change. I think some of the good things have been continuity, that we’ve continued to do well. A continual growth of things such as undergraduate research opportunities. Those are things that I think have been tremendous.

Our graduation rates from the time I’ve been here have moved. A six-year graduation rate when I first came here was 66 percent, and I was charged with getting that to 70 percent. It is now at 72 percent. I see that as a real shift in terms of being able to have students graduate more quickly and have more of them graduate.

The other great piece for me was that one of the things former Towson President Loeschke asked me to work on was to reduce the achievement gap, the gap between majority students and minority students on the campus. They both now graduate at 72 percent. There is no gap. To me, those are real positive shifts that have been taking place over the last five and a half years.

What would you say were some of your biggest personal accomplishments at Towson?

I think the things I have just talked about, really. The graduation rates, bringing in some of the analytics that we use to monitor students’ success initiatives, more advising, more central advisors. The advisors in colleges to help the students move through more effectively and more quickly. Those are things that I think have helped greatly.

Just to continue to attract high quality faculty. We have some really terrific faculty on this campus. Good scholars, great teachers and very engaged individuals with students. That to me is a hallmark in something to which I am very proud of.

What made you decide to join Towson University?

It was a place that was moving forwards. The president at the time was a very engaging individual, and I certainly enjoyed working with and for her. She sold me in some ways on coming.

The reputation of the place was obviously very good. When I came and interviewed, it’s a nice campus. It’s a place where people seem happy. People really like it here. It’s a very warm and welcoming community, and I’ve been very welcomed as an outsider.

That’s a great feeling. I think students feel the same way when they come and do their campus tours. They say, “I can see myself being here.” I certainly felt that the search committee was very warm and welcoming.

Why are you stepping down? Do you have plans after?

It’s time. We all reach our sell-by date and we all have a set shelf-life. I think the institution is ready to move in some new directions, and that will take new blood, and legs with a little more energy left in them. It’s time to pass the baton, to use a sporting metaphor from my realm of scholarly interest.

There’s a wonderful quote. There’s a late 19th, early 20th century English author, E.F. Benson, whose father was Queen Victoria’s favorite archbishop of Canterbury. E.F. Benson wrote a number of books. One of which is titled “As We Are,” and there’s this wonderful quote that I think summarizes my feelings about where I am and why it’s time.

“Unfortunately, there comes to a majority of those middle aged, an inelasticity, not of physical muscle and sinew alone, but of mental fiber. Experience has its dangers, it may bring wisdom, but it may also bring stiffness, and cause hardened deposits in the mind. And it’s resulting inelasticity is crippling.”

My plans are to take some time off, and re-tool. My plan is to go back to the Department of Kinesiology, where I am a tenured professor. I will teach and do research in my area of interest, which is Sport History. I see this as closing life’s circle. I started there, and I would like to finish there. Teaching, writing, and spending time in my area of interest.

What is something that you would like the Towson community to know about your current role?

It’s been a real honor to serve the institution in this role, as the chief academic officer. It’s a privilege to serve in this role at such a vibrant and warm and growing institution. I’ve been very fortunate. I’ve worked with some wonderful folks along the way, and I’ve had the privilege of serving an outstanding faculty.

Is there anything that you will miss most about this role?

Probably having an assistant who does everything for me. When I go back to being a faculty member, I’ll have to go back to doing things for myself, which will be hard.

She schedules me, makes sure I am in the right place at the right time, organizes things like you coming to talk to me, and making sure I get a chance to talk to you. Having somebody to help organize my day, now I’ll have to take more responsibility for things moving forward.

What are some hopes you have for Towson moving forward?

What was the hardest aspect of your job?

Never having enough money to do the things that an institution of this quality and this size deserves. In order the faculty can be supported in a way that they can do their best work, and in a way that students can be challenged and provided opportunities to grow and develop to be all that they can be.

There are never enough resources. And at this institution particularly, we run very lean and there are lots of things I would love to do to enhance the experience, that we just don’t have the money to do.

What was the easiest aspect of your job?

What would your advice be to the next person to enter your role?

Get to know the people. Understand the culture. Remember what got us here is the warm, supportive, welcoming atmosphere and attitude. If we lose that, we lose the thing that differentiates us from College Park and other places. Particularly as we get bigger, the temptation is to always become more anonymous and impersonal.

What makes this place special is the quality of the relationships and the warm, welcoming atmosphere that is fostered here. If we lose that, I think we’ll be in trouble.

What are you most excited about to return to be a professor?

I’ve got a load of boxes that are full of historical materials that I have carried around with me for ten years. I am so looking forward to being able to open those boxes and get back to doing some researching and writing on that. And, getting back to the classroom. I see very few students here on a regular basis. I miss the interaction, the vibrancy that students bring. I look forward to that. I hope it will keep me younger. It may stop me from becoming totally inelastic.