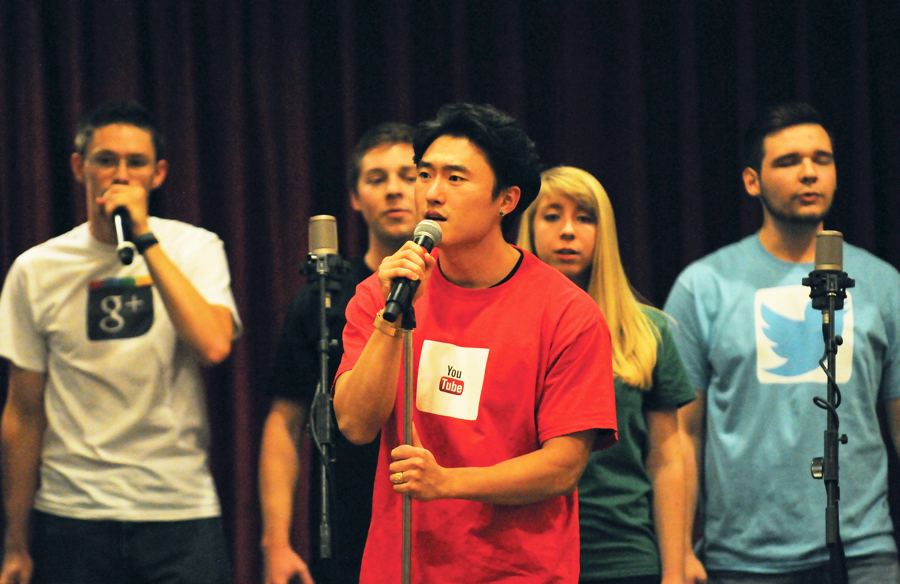 On Saturday night, Twitter, Tumblr, Kik and Myspace filled the Chesapeake Room in the Union with a diversity of sounds.

Dressed to reflect the night’s theme of social media, members of Towson’s premiere a cappella group Purrrfect Pitch performed at their annual fall concert with pieces such as “Somethin’ Bad” by Miranda Lambert, “Chandelier” by Sia and “Give Me Love” by Ed Sheeran.

Purrrfect Pitch introduced their own original musical changes to these popular songs and even created a 90’s medley mix that incorporated Christina Aguilera’s “Come on Over,” TLC’s “No Scrubs” and Backstreet Boy’s “Everybody.”

“We are a contemporary group,” elementary education major and president of Purrrfect Pitch Gavin Myers said. “We try to stay with what the younger crowd would be pleased with… we try to put our own twist on it.”

Other local a cappella groups such as Ketzev from Johns Hopkins and UMBC’s The Stilettos, and Cleftomaniacs also performed during the event, as well as Towson’s newest a cappella group Original Blend.

Emily Dennis, a math and secondary education major as well as a member of Original Blend, showcased her voice in a solo part for the Counting Crow’s “Accidentally in Love.”

“I’m not a music major but there’s a lot of different opportunities on campus for people who aren’t majoring in certain things but still have a really big interest in it,” Dennis said. “People who like to sing can still sing even if they are not in an official Towson choir or a music major.”

However, a cappella teams were not the only performers that evening. After driving seven hours from Cleveland, Ohio to attend the event, alum Joe Meadows was surprised when he was asked to perform improvised beat boxing during intermission.

“It was a lot of fun. I was honored to be here… It’s a high award to have so many people look up to you,” Meadows said.

The night ended with a ‘bang’ as Purrrfect Pitch performed Jessie J’s “Bang, Bang” followed by the Madden Brother’s, “We Are Done.”

“The audience was really good feeding us energy,” science major and member of Purrrfect Pitch Taylor Brown who performed Nicki Minaj’s solo in “Bang, Bang” said. “I think everyone likes a cappella. Music is very important. It can help you express your creativity in a special outlet.”

Purrrfect Pitch was recently accepted into the International Championship of Collegiate a Cappella (ICCA), a national collegiate competition. The group will have the opportunity to travel to New York, Tennessee and other places in the U.S. to compete. For ICCA travel donations, checks can be written out to Purrrfect Pitch through the SGA.