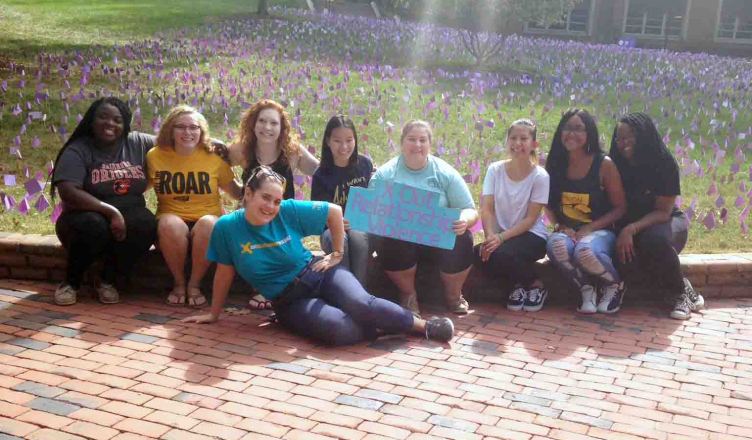 October is Domestic Violence Awareness Month. The Towson University Sexual Assault Peer Educators (SAPEs) placed 6,677 purple flags on the Cook Library Beach to represent the number of Towson students that have been, or will be, impacted by an unhealthy or abusive relationship in their lifetime. Those flags remained at the Beach from Oct. 2 to Oct. 6.

In addition to the purple flag campaign, the SAPEs also held a service project on Oct. 6, to fill 100 “blessing bags” to donate to The House of Ruth, Maryland, a domestic violence center in Baltimore that helps battered women and children who are seeking safety and security.

Becca Robbins is the lead peer educator for SAPE. This interview has been edited for clarity and brevity.

What is the purpose of the Sexual Assault Peer Educators? Why did you decide to become one?

The purpose of the Sexual Assault Peer Educators is to help inform our peers on campus about the importance of healthy relationships, consent, bystander intervention, sexual assault etc. The perk of having peers communicate with others about these more intense subjects is that students seem to find a comfort in talking to individual’s closer to their age. I personally joined SAPE after seeing a presentation in my Health 101 class back in 2014. The topic focused on domestic violence and healthy relationships. I was instantly fascinated. I had known I wanted to graduate from Towson feeling like I impacted students, I felt that being a peer educator could do just that. I have now been a SAPE for all four years of college, and I truly feel like I have benefited from it. I have had countless conversations with students about intense topics, and though draining at times, it is refreshing to know I could be keeping my peers safe, knowledgeable and healthy mentally or physically.

What do you like most about being a SAPE?

What I love about SAPE is when you have a conversation with a student and they walk away with a whole new outlook on the topics we cover. It is an amazing feeling when faculty and students also thank me for covering such topics. Without this organization, I don’t believe some students would have half the knowledge they grasp after stopping by one of our tabling events or coming to one of our events.

What is the significance of October being Domestic Violence Awareness month?

The reason domestic violence awareness month is in October is because it began after “The Day of Unity” which was held in October 1981 by the National Coalition Against Domestic Violence. The purpose of “the day of unity” was to connect advocates who were focused on ending violence against women and children.

Why do you feel it is important to educate students on domestic violence and sexual assault?

How would you define domestic violence?

I believe people don’t realize how many forms of domestic violence can occur in a relationship. There can be abuse in terms of finances, mental, physical and emotional. I believe many students feel as though domestic violence is purely physical, but that is not the case, and that is an important conversation we tried to have with all of the students who spoke to us during the purple flag campaign.

How would you define sexual assault?

When students first approach SAPE and discuss sexual assault, I believe they have this idea that sexual assault is what they see in the movies or TV shows; that is not the case. SAPE defines sexual violence as sexual assault, relationship violence, stalking, sexual harassment, sexual intimidation and sexual exploitation. Another point we try to make for students is that, if there was not an active, ongoing, coherent, willing and affirmative “YES” then the act could be classified as sexual violence.

What was the purpose of the purple flag campaign? Why were the flags purple?

The purpose of the purple flag campaign was to take a week out of October to discuss the importance of healthy relationships and educate students on domestic violence. Earlier in the week SAPEs and other organizations placed 6,677 purple flags to represent the number of Towson students who could be in an unhealthy relationship within their lifetime. The flags are purple because the color is meant to represent courage, peace, survival, honor and dedication to ending violence, such as the Purple Heart given to soldiers in the military over the same values.

What are some signs of an unhealthy, abusive relationship?

There is actually a cycle called the “Cycle of Abuse.” Tension Building: the abuser may decrease communication within the relationship, they may start getting angry and violent, they may also start abusing the victim. The victim may feel like they are walking on eggshells or become fearful and feel the need to placate the abuser. Incident is when any type of abuse occurs (physical/sexual/emotional/verbal). One’s partner may show anger, blaming, arguing, threats. Reconciliation is when the abuser apologizes, gives excuses, blames the victim, denies the abuse occurred, or says that is wasn’t as bad as the victim claims. The abuser may also promise it will never happen again. Some victims may not experience an apologetic abuser. They may just see a decrease in tension building or incident before another cycle starts. Calm: incident is “forgotten,” no abuse is taking place. The “honeymoon” phase: the abuser acts like the abuse never happened. Promises made during the “Reconciliation” phase may be met. The victim may hope that the abuse is over. The abuser may give gifts to the victim.

Can you explain what some red flags are to look for in a relationship?

There are many signs of an unhealthy relationship such as isolation, change in mood, dramatic change in values, lack of communication with other individuals, quick involvement, controlling behavior, unrealistic expectations, blaming significant other for problems or mistakes, hypersensitivity and making the other person in the relationship feel responsible for all emotions, etc.

What would you tell someone who is in an unhealthy, abusive relationship? What are some resources that Towson has that could help them?

If a student came to me and disclosed they were in an unhealthy relationship I would simply listen, be supportive in their decisions, be nonjudgmental, and let that individual know about the resources on campus, such as the Counseling Center and Health Center, along with resources off campus such as Turn Around located in Baltimore, which has a 24-hour helpline (443-279-0379). I don’t believe people realize how hard it is to leave a relationship, let alone one that is unhealthy. It is a vicious cycle and that individual is the only one who truly has the power to break it. I would simply be supportive and let that individual know they are not alone and they are heard.

What other events and campaigns do the SAPEs host?

SAPE tries to table rather frequently just to make sure students know who we are and what we focus on. SAPEs will be tabling at I Love Female Orgasm, Wednesday, Oct. 11 and Thursday Oct. 12. We will be a part of the Counseling Center’s Halloween party Oct. 24, but also, we have many big events in the spring such as “Let’s Talk About Sex” which is an event that focuses on educating students about healthy relationships and how to have healthy and safe sex. We also have an event in the spring called “Take Back the Night” where students can share their support, but also where survivors of sexual violence can come and share their story in a safe and trusted area. We also have an event called The Clothesline Project, where students can come and make a shirt that shares their story of sexual violence or their support, we then hang them up on a clothesline so other students can read students’ stories and support those individuals.

I would just like to always invite students to come and talk to us. I believe education is a key factor in life, especially in terms of topics like these. We truly just want to educate our students and keep them as safe as possible so that they are able to have the healthiest and the best college experience they can while at Towson.