Below is the Towerlight’s conversation with Marks following the meeting.

Why come to Towson every year to visit the university?

Towson is incredibly important to Baltimore County.  This is a leading educational and cultural institution, it’s a major employer and we’re very proud to have Towson University in Baltimore County.  I like to come to talk to the Student Government Association.  These are the leaders and ambassadors for Towson University and I like to give them an update on things and always stress the importance of setting a good example for the rest of the student body. 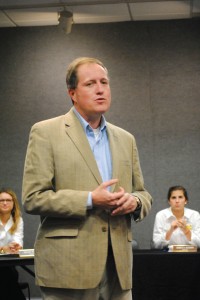 Why should students care about local politics, especially
out-of-state students?

For four years, they’re going to be part of a larger community.  They’re going to frequent our restaurants and bars, and some of them will be employed in the community, and after they graduate, many will probably stay in the Baltimore region.  So, I think it’s important for them to pay attention to politics and what goes on in the larger community.

When talking to the SGA, you mentioned relations between students and the Towson community had improved. What do you think helped improve them?

Communication has improved.  There’s a university relations committee that meets every month during the school year and it includes Towson University staff and community leaders – I also go to those meetings.  They help identify problem areas.  There’s a hotline that residents can call to complain.  The county has tried to do a better job dealing with problem areas, whether there’s homes, whether there’s disturbances – I think all of that has really helped.  Also, Towson University is doing a better job, I think, of building more housing on campus.

A lot of people here bike to get around, and you mentioned future plans for new bikeways. What does the future hold in terms of bike transportation?

The first part of this is called the “Bike Beltway” and it did a loop around Towson, and now the focus is doing the spokes, doing the north-south, east-west connections.  There’s thought about having the bike lanes go down Goucher Boulevard, and down Stevenson Lane and radiating out.  The other thing that I’m very happy we’ve done is that we’ve required bike parking throughout downtown Towson.  One goal I would have is to get a bike shop in Towson, I don’t understand why we don’t have a bike shop in downtown Towson.

You also mentioned the Towson Circulator, to be launched in 2017.  Where would that go?

It would be a north-south route and an east-west route. The north-south route would probably begin at Goucher College and come south along York Road to the city line.  A Towson University student could hop on that, and there will be a spur into the university, and get into the commercial core without paying for parking.  There would also be an east-west route that would largely go from Kenilworth and the mall over to Towson Place, closer to Loch Raven Village.  This is an issue where the county executive and I did not see eye-to-eye – he doesn’t support the idea, so I had to go to the governor to get money for the planning of this – he’s been very helpful.

With Towson Row coming, the traffic will likely get worse.  What is your plan or the council’s plan to combat more traffic on the road?

I think it will be a redistribution [of cars] to some extent.  It’s better pedestrian connections, it’s more biking, it’s getting more student housing built closer to campus.  There will be a student housing component to Towson Row.  I would like the State Highway Administration to tell us what needs to be improved about the [Burke Avenue at York Road] intersection.  Unfortunately, I think they’ll tell us that it requires a major taking of land to make it wider.  But, I think, for right now, a solution is getting a circulator and more biking and then promoting Towson Row as closer to the campus to get some traffic off the road.