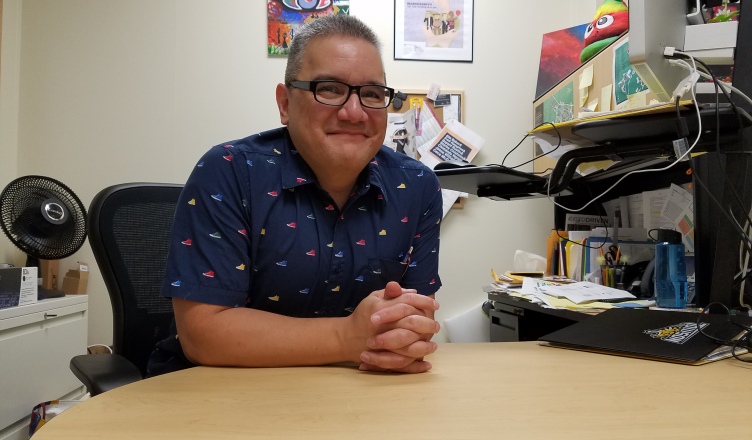 Associate Director for Cultural Competency Education Brian Jara started in his position last February. The position was created in response to the 2015 #OccupyTowson meeting between a group of student activists and then-Interim President Tim Chandler. According to Jara, cultural competency is the intentional commitment to an ongoing and recurring process of self-reflection on your own identities, active exploration of identities you do not have, and willingness to make, name and own your mistakes. The interview has been edited for clarity and brevity.

What were you doing before you came to Towson?

I have worked in higher ed since 1998. I started out in student affairs, advising student organizations and doing academic advising. Then I sort of stumbled into teaching while I was in graduate school. The original plan for me personally and professionally was to work in higher ed, work in student affairs, work with students outside of classrooms. In my own graduate studies, I stumbled into teaching. I ended up teaching in Women’s, Gender, Sexuality and Queer Studies for the last 15 years. Most recently I came to Towson from four years on the faculty at West Virginia University and I was faculty in Women’s and Gender Studies. And I’m originally from this area so the other factor was getting closer to home. So this job is returning home and also returning back into doing more student affairs work and less faculty work.

What does the Associate Director of Cultural Competency Education do?

The position is meant to organize and then grow all series of workshops and trainings and events that hopefully directly impact the campus and help increase the cultural capacity of campus. That means is our campus ready and comfortable to have challenging, uncomfortable discussions about identities, about justice, about equity? This year is the first time we’ll have two weekend retreats for students. And then the annual cultural competency workshop series — which obviously makes sense for this position to oversee – that has been around for years. That’s typically seven to eight workshops a year. We have four in the fall, four in the spring, planned for this year. The first one is going to make some space to talk about what’s going on in the world, Charlottesville and monuments, discussions and debates.

How can cultural competence education help people address the violence in Charlottesville and other incidents as they arise?

There are some campuses that started classes a week ago, two weeks ago. So there are campuses that started right after that weekend and they are having to figure out what students are coming to campus with. Some students are bothered by it. Some students are still invested in what’s happening. Some students don’t know what happened. My training with RAs happened the Tuesday after Charlottesville. I had to at least acknowledge that it happened. But what was really fascinating for me is that at one of the breaks in this three-hour training, some RAs came up and said “I think we need to talk more about it.” I said “okay.” So what we got in that discussion is what I said: some students were distracted by it, some students were still confused, and some students didn’t know what happened. They just hadn’t been following current events. We just took that as a sign that we needed to get on the same page. What are the facts as we know it? Why are there still heated debates? Cultural competency means this ongoing challenge for me to think about myself and my identities that I have, to recognize identities that I don’t have and how to learn more about it, and how does that all relate to each other? Cultural competency is the intentional commitment to an ongoing and recurring process of self-reflection on your own identities, active exploration of identities you do not have, and willingness to make, name and own your mistakes. Cultural competency is not something you can achieve after one workshop. One of the metaphors that we use is dental hygiene. When you claim to have dental hygiene, that means you brush your teeth regularly, hopefully a few times a day. The competency word, I’m not wild about. I would prefer that we think in terms of cultural consciousness. It’s just a broader, fluid term. If we’re already on board with ongoing discussions around these complex issues, it makes sense that we fold in events like Charlottesville. There’s no clear cut, easy, comfortable, finite way to make sense of what happened, but we have to at least commit to the messy process of thinking about it, talking about it, occasionally disagreeing about it. There will be other current events that will happen throughout a semester that we will try to make room for and connect to our workshops. That’s just the nature of a college campus and the world. Charlottesville is not the problem, it’s a symptom of the problem that we need to always connect these discussions to what’s happening around us.

How can the Towson community pitch in to make this a more culturally competent university?

I think the assumption across the campus is that the Center for Student Diversity should be involved in programs and discussions around diversity, which makes sense. But it’s not only our job to do that work. We’re here to help and consult. What we know, as President Schatzel has regularly said, is diversity is everyone’s job. What we’re seeing is more and more offices are finding ways to have an active role in doing that work. We are always available to help and to consult and to partner. In particular, going back to this area of cultural competency, I never will expect to be the only person giving these workshops. What I hope is as I connect with more offices that work with students, I see where they’re at, I offer some advice, I consult, I see how can I help. Some offices are ready to go and they’re doing this challenging work. Some want to have more conversations to figure out how to keep having these conversations. What is next on my wish list is to find interested students who want to get more actively involved. That could be in a role of peer education. I think it’s valuable often when students hear from their peers about these issues. It helps. So I’m looking to connect with students who are interested in getting more involved, whether as a peer educator, whether as a student leader who wants our help. Basically always keep assessing the tone of campus, what the needs of campus are, and to help what are the topics that we need to figure out ways to create more conversations and workshops around. I have just begun to have conversations with SGA. They clearly have a commitment post-Charlottesville to raise the bar on having these discussions and we’re happy to collaborate with them. No one can do this type of work alone, so it just speaks to the importance of partnerships and collaborating. I value students in so many ways in particular. They’re the experts on campus culture. They know what’s happening. They know what students – particularly the marginalized students – what they’re facing, what they’re needs are. And they’re the best people to help always let us know the most important pressing needs that need discussions.

In his statement in response to Charlottesville, SGA President James Mileo mentioned the plan to increase diversity and inclusion training for student leaders, faculty and staff? Have you been working with him to further those goals?

We have. We’ve been meeting. Particularly in the letter where he talked about the need for SGA to do ongoing trainings, that’s an obvious place for us to make use of the partnership. I don’t expect any student leader or any student organization or any office to figure out how to do this on their own. So that’s my hope is that as I’ve met with each office at least once in my six months and one week on the job is to figure out where they’re at and how I can help. With SGA, I’m looking forward to continuing to connect with them and figure out in these ongoing trainings, what are their needs, what do I think they could also use help on. We’ll keep working on that and I hope that can serve as a model for other student leaders and other student organizations to find a way. I think some organizations at first won’t get a sense of how can we make a plan to have ongoing discussions that make sense for our organization. And that’s where I think that I can help.

Is there anything else you would like people to know about your position or the work that your office does?

I do know that there are still a lot of people on campus who aren’t fully aware of what the CSD is, where we are, and what we do. We’re constantly trying to educate the campus and invite people into our space. In this particular position, what I hope – it’s now me, my new GA, and the students that we work with as student leaders within this area – I hope that we always remember that this new area in the CSD is possible because student activists, in particular black student activists, put their academic careers, their lives, and their bodies on the line. Because of that is why this area is here. I hope that every day on the job I remember that because I owe it to student leaders, I owe it to black student activists who are now part of Towson’s history that I always do right by them. Without them taking some really serious risks, this area and this position wouldn’t exist. That, I hope, is what fuels us every day within the CSD. That’s just the power of students finding their voice and taking risks and effecting social change on campus. That’s the motivation that I just need every day to remember why we’re doing this work.