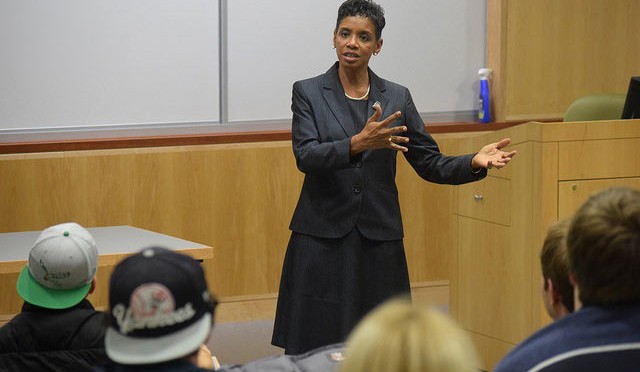 Donna Edwards, representative of Maryland’s 4th Congressional District (parts of Anne Arundel and Prince George’s counties) since 2008, visited Towson Thursday, Oct. 15, to speak with students and other members of the university community.
Edwards is running in the Democratic primary race for the U.S. Senate against Chris Van Hollen, who represents Maryland’s 8th Congressional District (parts of Frederick, Montgomery and Carroll counties).

College Democrats of Towson, a club on campus, have reached out to Van Hollen’s staff but have not made any kind of an announcement about having him on campus — though they have said they’d love to have him here before Maryland’s primary election on April 26.
For an exclusive video portion of The Towerlight’s conversation with Representative Edwards, visit www.thetowerlight.com

Why come to Towson?

I am on a mission to visit every single college campus all around our state. I really do believe in the engagement of young people in our political process. I think that what they think matters and should matter to those of us who seek to represent them. Towson was a great place to find that out.

What’s your favorite memory from your undergraduate years?

My favorite memory was actually my freshman year and my home mates. We arrived on campus, I went to Wake Forest University, and we didn’t know each other. We all came from a lot of different places and spaces. Those women remain my friends today.

Where do you stand on the legalization of recreational marijuana?

I think that the direction Maryland is going is a direction we need to for our state. That is, we’re proceeding with medical marijuana. I think inevitably, because of where the lines are drawn, you can see this in other states, that it actually leads to the introduction of recreational marijuana and the regulation of that. I think that it’s important for us to have a regulatory framework that works across the country.

What should we do about the continually rising costs of higher education, especially at public institutions?

I really do support the president’s idea of trying to make those first two years no cost or low-cost. The investment in education pays back multiple-fold. There’s not a downside to shelling out the money for college education, because those same college graduates contribute to our economy, they grow our economy, they start small businesses – it’s a good investment.

If you’re elected to the U.S. Senate, what will you do to protect the Chesapeake Bay and to protect Maryland from the changing climate?

Well, I like to say when I’m elected to the United States Senate – I’m going to continue the work that I’ve done in the House of Representatives. I’ve been a huge proponent of protecting the Bay, developing legislation around our water infrastructure that has an impact on the Bay, and making sure that we get forthwith to address climate change. We don’t have any time to wait. The Chesapeake Bay is warming.

To what degree do you think the internet should be regulated?