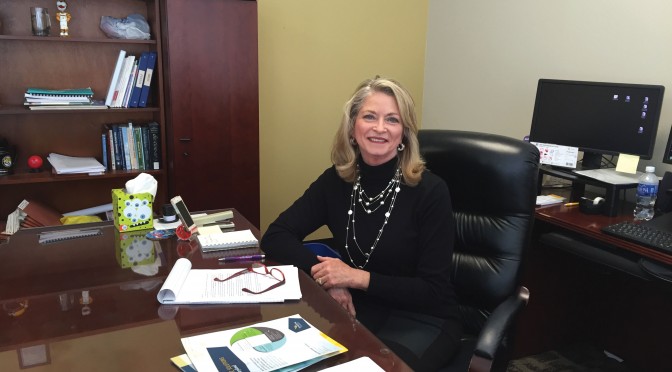 Dyan Brasington, who leads over 60 people as vice president for the Division of Innovation and Applied Research, is retiring at the end of this month after almost 11 years with Towson University. In her division, she works to integrate Towson University with the outside community.
The Towerlight sat down with Brasington as a chance for her to reflect on her time at Towson. The following is an edited version (for brevity and clarity) of that conversation.

My personal day-to-day is a lot about working with my colleagues as part of the president’s council on policy initiatives. It’s also about business development in a very big way—working with my team to help them do their job. We have an entrepreneurial focus. Some administrative, but a lot of outward-facing activity.

How did you get your position?

Well, I started in Towson in 2004. I had been in economic development for all of my career. I had just been at the Technology Council of Maryland for ten years, and I was a single mom and looking for something that wouldn’t take up quite as much of my time. I had spent quite a bit of time at the legislature, where you can sit for hours waiting to give testimony, and that didn’t bode well for keeping home hours. I was looking to make a change.
Then, James Clements [who was in a position similar to Brasington’s at the time, and then served as provost] asked me to come to Towson and help them put together some programs and help them start an economic development program here.

What’s the best day of work you’ve had here?

My best day? Actually, I’ve had a lot of best days. A lot of not best days, but also a lot of best days. It’s about my people and my team. Those are the best days. We do a lot together, we collaborate together, we have fun together, we are big team-builders in my shop. We host a lot of students, actually. Recently we hosted 18 students who worked on research projects with us. When they get stolen away from us for really good jobs, that feels good. I think the best day is when I’m doing things with my team.
I will have to say, recently, I was given a tiara, because I am the Chili Cook-Off Champion in the Division of Innovation and Applied Research for many years running.

Tell me about that.

Every year we do have a chili cook off and dessert contest. And I win the chili every year, and it’s not because I’m the boss, I think. They try to disguise whose chili it is, but that’s one of my claims to fame. They’re trying to get the recipe, but even on my departure it’s not coming out.

What if they find out how simple it is?

What was the worst day that you’ve had at your job?

I would say, because of the growth of our division and the different kind of a place it is in the university, it’s a self-funded, ever-changing, ever-reinventing place at a university that’s very vulnerable to the marketplace, so we’ve had our struggles. I will say it’s very hard to be self-funded and entrepreneurial in an environment that really is made for rules and regulations, not that Towson is any more bureaucratic than any other government institution. No nightmares, just a steady grind sometimes.

I just have to say it’s working with my team. It’s working with my direct reports. One of the reasons we’ve been so successful is that we’ve got great people. My folks are filled with talent, imagination, high-energy and when we get creative, and we get entrepreneurial, and something good comes of that, that’s really the most fun.

I really think I have helped to help make Towson, through our division, no one person does this, relevant, keep it relevant and poised for the future. We’ve had a lot of firsts, we really have—we started the incubator, we started Student Launchpad. We developed a Towson showcase with academic affairs. We’ve done so many things to kind of meld Towson with the outside community and the outside world and to me, I think that’s my mark. To bring the university to the community and vice versa.

What’s next for you?

Well, I’m moving. That makes it hard, because it’s not only leaving the University and my team, but the area that I’ve been in for a long time. I’m going to Florida. My spouse is already there, he’s been working there for six months. I’m looking at what opportunities are. We talk about retirement, but there is no such thing as retirement, honestly. I’ll most likely work, but we’ll see what it is. I’ll take a little breath and get moved, and we’ll see what’s next.

Previous post Meet in the middle and learn to grow
Next post What’s Hot: Showtime At Towson
Editor in Chief