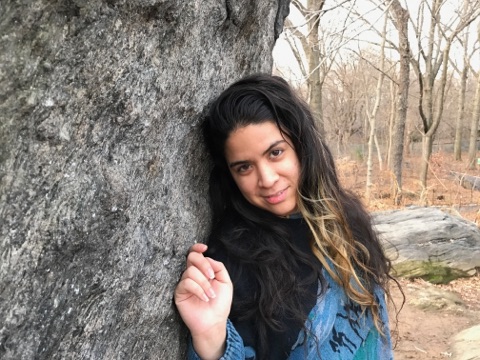 The following is a question and answer session with senior acting major and performance artist Mani Yangilmau, whose ritual theatre piece will be performed on Thursday at 5 p.m. in Center for the Arts room 3059.

T: Would you characterize your work as performance art or do you do other forms of visual art?
M: I’m mostly just performance. Sometimes I write songs.

T: Tell me about your independent study.
M: Basically, I wanted to explore the idea of spiritual ceremony for people who aren’t religious, who want to commemorate some sort of experience in their lives that isn’t covered by, like, a baptism or a funeral. Something that they specifically wanted to commemorate. Some people [have said to me], “People didn’t understand when my mom died,” or, “I’ve been through a lot of trauma in my life and I want to cope with that.” So we have a test subject, which we call a vessel, he’s told us a lot about his life story–things that are recurring images and just really important life experiences that he’s had. From that, we’re creating a spiritual ceremony that we’re basing off of pop culture, different religions, some incantations from different places. It’s really interesting, and also there’s a lot more responsibility than I was expecting.

T: How so?
M: There’s a varying degree of people in my ensemble who believe in spirits, and also those who don’t. They all come from different backgrounds, so some of them are worried that with the work that we’re doing and the stuff we’re basing it off of, if we don’t know enough about what we’re doing, we could potentially harm someone. Specifically because with this particular instance, the [vessel] wants to get rid of a curse. So we’re basically extracting his energy and dealing with stuff like that and so there’s a lot of potential for energy to transfer to other people.

T: How have you tried to resolve those concerns?
M: We’ve been doing a lot of research and we’ve been making sure we have a plan just in case some sort of emotional reaction happens. I know that a lot of people with trauma have anxiety attacks and stuff like that so we’ve been training ourselves how to deal with that if it happens. There’s also a friend of ours who’s Wiccan and he’s been telling us basic guidelines for dealing with spiritual energy, so it’s mostly been us being like, “Okay, we have really good intent, and we’re also going to take this as seriously as possible.”

T: What inspired you to create this piece?
M:  A couple of years ago, I was dealing with a lot of trauma in my life, to the point where I was actually suicidal, or, had suicidal ideation. I wanted to deal with that in a healthy way. Because I’m very theatre world-based, I just wanted to have a performance where someone could give me a proper funeral and then give me a rebirth so that I could let go of all the things I was holding onto, so that’s where it started. I asked one of my friends if she could help me with that and she said, “I’ve never heard of anything like that.” I’m not particularly religious, but I am spiritual, and so I want to be able to create healing in other people who are like [me], or even people who are religious, but have had unexpected life experiences. You know they don’t really have a baptism for people who want to commit suicide.

T: Has this process been a cathartic experience for you in that regard?
M: Absolutely. I’ve been in counseling and I’ve been taking meds, so I’ve been mostly dealing with my stuff, but also just, there’s something about getting into a different headspace, getting into this spiritual realm and working on healing other people, that is very cathartic for me, and even more important to me than it is to heal myself. I feel like everybody needs someone to help them with healing, and I’m lucky enough to have gone through a lot of that process and now I’m at the point where I can help other people and that’s basically my life mission.

T: What has the process of creating the piece been like? And what’s it called?
M:  I’m workshopping it as what I called Manifest Theatre, but my name is Mani so people keep on making jokes about it [laughs]. But when I directed In The Blood,  at the end of it I was like, “okay, now I know that I would like to be a lot more collaborative.” So I picked people, and actually some people came to me and asked me if they could be a part of it […] so I have three actors from In The Blood and three other [ensemble members] that I really trust. So it’s been a lot of devising, everybody has been in charge of their own thing.

T: What are you trying to communicate with this piece?
M:  Well this is an individualized theatre piece, so basically it’s for Hunter [the ‘vessel’] and it’s for his support group. So those are most of the people who are invited. So basically it’s for personal catharsis with the support of [his] friends.

T: So is this kind of like theatre therapy?
M: There’s a weird line between ritual theatre and drama therapy, and I actually had to write a thesis about this. Ritual theatre workshops can be used to help unpack sexual trauma and [the experiences of] sexual assault survivors, and so I actually ran into that issue where it was like, “Okay, this is drama therapy,” which I don’t necessarily agree with. I don’t think ritual theatre and drama therapy are the same thing, but I do think that they can create similar results. The point of a lot of drama therapy is like this personal catharsis, and that’s our main goal, but our focus on the ensemble level is creating an art piece. So it’s like an art piece in order to support this person to have a cathartic experience, but it’s not only for that. It’s also to create art.

T: Can you tell me about some of your past work?
M: I wrote and produced [the 2016 one-act] Vajungle. I directed In The Blood [in April] and I’ve directed a couple of other things [and written pieces for] Play Slam. I’ve also acted in a lot of things. Most of my work was in acting, like I did Lysistrata, 13 Clowns, Good Person of Szechuan. And that was mostly my focus for a long time, but the second year I was here, I was like, “Oh I want to [try out] this directing thing,” and I also started dealing with my own processes of grief and acceptance and I wrote Vajungle out of that.

T:  Do you have a preference for directing, acting or writing?
M: I’m actually a lot more interested in the writing, directing, devising world. It’s not that I don’t want to perform, it’s that I want to be able to perform what I want to, instead of having to pigeonhole myself in roles that other people find acceptable. It’s also kind of hard because I am a woman of color, and so most of the time I am performing as races other than my own. Like I’ve never had an opportunity to perform as my own race, Pacific Islander, which is hard because the only thing that I can think of that I could do is like Lilo and Stitch on Ice or South Pacific, which is incredibly racist.

T: In what ways has being a woman of color influenced your work?
M: My professors are great and everything and all of the performances they put on are fantastic. That being said, I am really bored with classical work and I’ve never particularly been interested in it. So most of what I’ve been doing has been seeking out opportunities for people of color, because I feel like there’s so many voices in this department that aren’t really… that don’t have the opportunity to shine–which is why most of the time when I do direct shows, I actively put people color in it, because I know they’ll have a different experience than what I’ve seen in a privileged white institute.

T: Who are some artists that have inspired you either personally or in your own work?
M: That’s a big question. I would say Frida Kahlo, Beyoncé, […] Esperanza Spalding… basically like a whole bunch of women of color.  And also I would say that religion is also really inspiring.

T: In what way?
M: I had a bad experience with religion growing up. So from a cultural, storytelling level, religion is really fascinating and also on top of that, even though I had a bad experience, I know that it does bring catharsis that I’m trying to bring to other people in a very similar way for people who have experienced religion in a good way. So on a storytelling level, it’s actually really fascinating, and then on top of that, it does bring healing to people. So that’s really interesting– navigating through that in a secular and nonsecular way.

T: You’re graduating this semester. Do you have plans for what you’re going to do?
M: Well I’m staying in Baltimore for a year I’m hoping to get hired in some sort of theatre capacity. And just like, save money and then at some point, I want to go to Cali. They have a really good avant-garde theatre world over there, so that’s really exciting. And if I need to, I can also try film. I don’t know.

T: What advice would you give to any other aspiring artists?
M: I would say that my professors are definitely the reason why I am where I am today. I actively sought out a lot of different opportunities. I submitted my work to festivals, I submitted a student proposal to direct, and on top of that, I’ve done three or four different independent studies with professors that I really respect. They’re the people who have given me all this information about ritual theatre, [and] how to be a better playwright and how to direct, that I wouldn’t have been able to find find on my own so I would say relentlessly search for opportunities. Because you’re paying thousands of dollars a year, and if you’re not getting what you need out of it then, I mean, you’re kind of shit out of luck. You should have the work ethic to be able to push yourself hard.