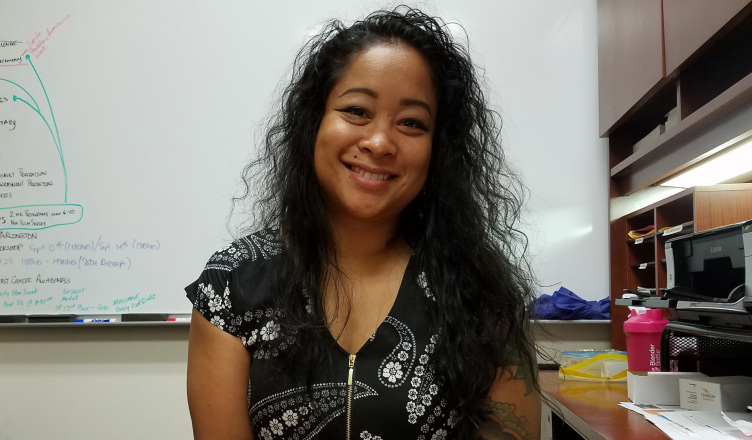 Benz Armstrong is Towson University’s new Director of the Military and Veterans Center. After serving for more than eight years in the U.S. Army, Armstrong is now helping military-affiliated personnel transition to student life, and students transition to military life. This interview has been edited for clarity and brevity.

Tell me about yourself.

I enlisted in the U.S. Army as a Military Police Officer where I served eight and a half honorable years. I have traveled all over the world as a soldier and a civilian contractor. Being in the military was not only life changing, but challenging. I love to be challenged and always on the go. I’ve gained so much confidence, skillsets and accomplishments that many my age wouldn’t have had at the age of 17. Coming out of the service, I utilized my skills to land a job as a senior security engineer with the 1st Intelligence Operations Command out of Fort Belvoir, Virginia. I travelled all over, training both soldiers and civilians, and conducted other missions as it came down through the chain. I obtained my B.A. from the University of Baltimore. I started working as a student worker for the Bob Parsons Veterans Center, where I was offered a coordinator position upon graduation. I am very thankful for the offer because it allowed me to advocate for my veterans of UB. I knew I wanted to advocate and develop professionally. In order to do this, I had to reach a bigger population of students. I am three months into being the Director of the Military and Veterans Center here at TU, and have enjoyed it tremendously. The students have all been so welcoming and a joy to work with. I look forward to this semester providing many programs to raise awareness and educate the TU community who we are and why we are here. I am also the chair for the Maryland College Collaboration for Student Veterans Commission, reporting to Maryland Secretary of Veteran Affairs George Owings.

What does your role as the Director of the Military and Veteran Center entail?

How do you use your own experiences as a veteran to better serve military-affiliated personnel?

I’m an alum of University of Baltimore, so coming into transition from military lifestyle and military culture to student life was very challenging. There wasn’t a guideline for it, and there wasn’t your battle buddy to help you or assist you in ‘hey where do we go from here?’ I had to navigate that myself. As a student at University of Baltimore, I had to quickly rely on my skills of what I did as a leader from when I was in the military, and that’s to be resourceful. I started seeking out different centers that would help, seek out resources or services that could help me better understand and navigate my environment. I was able to connect to the veterans and lay down a guide for them, straight from them being prospective students to being matriculated students. I provided them steps from Point A to Point B of what you need to do to get your GI bill started, to get that letter of recommendation and just everything from start to finish to make that transition easy to come into college.

What are some of the challenges that you have faced or that you’ve seen other military-affiliated personnel face in the higher education system?

I had to learn how to transition from how I communicated because you can’t always utilize acronyms because civilians don’t understand acronyms. So just teaching or advising or mentoring these veterans on how to communicate effectively within student life and how to work in group settings when you have to work in student groups. And then educating the professors and staff members on the needs of our military and veteran students, the reasons why they sit in the back of class because they need to see the door, or the reasons why they tend to not work very well in group projects because of the strict guidelines that they’re used to. So just being able to help them transition through has been able to allow me to do my job as director of the center to basically be their commanding officer and continue to guide them and assist them through this process, so they can have someone to always be reliable, to count on and to help them.

What are some of the challenges that you saw military-affiliated personnel face at University of Baltimore and how do you hope to address those challenges here at Towson?

Some of those issues that I saw were staff and faculty not knowing how to communicate or deal with military and veteran students. We had an incident where one of the veterans had a PTSD (post-traumatic stress disorder) moment in the classroom, and because the faculty member was not properly trained or didn’t know how PTSD even looks, he thought the student was on drugs and was being rude or drunk in class. So basically he dismissed the student and after everything was said and done. One, the professor didn’t know who to contact. There was a gap in that miscommunication, that of when a PTSD incident happens who to contact. So they weren’t educated on who to contact for that. Two, how to deal with the student when they are facing a PTSD incident. That student was left scarred by embarrassment and ridiculed by his classmates, so therefore the student almost dropped out and just said that they didn’t want to attend college anymore because they were so embarrassed. Oftentimes faculty forget that these are professional students coming in at a higher skillset level. They’re not your traditional 17-year-olds. These veterans are coming in and they’ve been charged with guarding multi-million dollar equipments and taking leadership roles of commanding troops from a four-man team to a squad to a platoon. When they come to this environment, instead of the faculty member or staff member acknowledging their special skillsets and meeting them at least in the middle of where they’re coming from, they tend to treat them as the traditional 17-year-olds and that’s where it sometimes clashes. So the majority of that is just basically understanding their needs and where they’re coming from.

According to the RAND Center for Military Health Policy Research, 18.5 percent of veterans who served in Iraq or Afghanistan have post-traumatic stress disorder or depression. How is the Military and Veteran Center making sure veterans get the care they need?

We have an MoU (memorandum of understanding) with Dr. Meade Eggleston. She’s the VITAL (Veterans Integration To Academic Leadership) point of contact between us and the VA (Veterans Affairs) hospital. Also, collaborating with the counseling services. They have their own support counseling services for military-affiliated students. And there is a Mental Health Awareness month in the month of September that we will be collaborating upon to set up a table and bringing awareness and letting these students know that it’s okay to say that you’re not okay. And that you can utilize our center, my door is always open. They can come in and talk to me or any of my staff members and let them know ‘hey, do you mind walking me over there.’ Because the “battle buddy” system is a huge part of the military. You don’t go anywhere by yourself. You always have that person you can trust. And just letting them know how to seek warning signs of what depression is. Through education and awareness training, they can know “well maybe I am depressed.” Because some students don’t even know that they’re depressed or they didn’t even know that they are struggling with PTSD. Some of these veterans, they’re trained to be strong, they’re trained to be leaders and they’re trained to overcome many obstacles that civilians would just stop dead in their tracks and walk away from. To be diagnosed or to feel you’re weak is not part of our genetics. We take care of our own and we overcome any obstacles. With students transitioning out of the military, part of my job is to help tell them ‘once a soldier, you’re always a soldier. Or once a marine, you’re always a marine. However, you have to be able to allow yourself to be vulnerable to get the help and services that you need.’ So we’re trying to overcome those obstacles.

What are your goals in this new position?

Just being able to see my brothers and sisters transition into student life and then civilian life, I wouldn’t be able to ask for anything more. Also, seeing traditional students being interested in either joining ROTC (Reserve Officers’ Training Corps) or going through enlistment. We’ll hold one or two Saturdays a month where myself and local recruiters will come in and help educate them on military culture, what to expect for basic training, and to help them prepare for their ASVAB (Armed Services Vocational Aptitude Battery) tests so that they could score as high as they possibly could to get the job that they want within the military. I’m working with my GA (graduate assistant) and my assistant to create a support group for spouses and dependents. These are going to be a group of spouses where they can come and talk about their differences or what they’re going through and just relatable things. And the same with dependents. Because oftentimes us as veterans, we forget that our spouses and dependents go through a lot. We may be on the frontlines doing a lot of things and seeing war for what it is. But then our spouses and dependents, they’re struggling just as much because, one, we’re not home with them, and two, the spouse now has to carry all the weight of bills and maintaining the house, maintaining the structure of what a home should be for their child. And then the dependent has to move schools because your duty station changes. They don’t have a say in that. Being able to start a support group so dependents can talk to other dependents and providing resources for them to let them know ‘if you are depressed, we’ll have resources for you’ or how to reach out or how to overcome some of the feelings they do have. Some of our dependents, because you move around so much, our dependents starting to go into their shell and not make any friends because they start thinking along the lines of ‘why should I make friends? Because I don’t know how long I’m here so it’s no use.’ It’s not good for networking, it’s not good for just mental health. You need friends. You need to be able to hold a normal teenage life or just be a child and enjoy that time. But being in a military family, it’s hard.

Anything else you would like Towson to know about you?

I’m very happy to be here. It’s very humbling to be here to help serve my brothers and sisters. I’m a huge advocate for them and I just want to see their success. Because their success is my success. To be able to give back out of uniform and making they’re successful transitioning from military to student life to obtaining that degree and then obtaining that career of choice, that’s a success story. Their mission never really ends. I guess I would say that would be a good story for me, just to see them successfully transition.