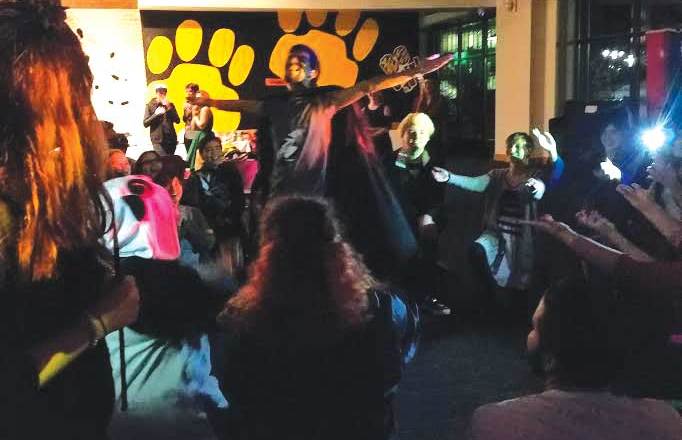 Towson University’s Queer Student Union kicked off the spooky celebrations early this year with their annual Hallowqueer party on Oct. 21, allowing attendees to show off their costume creations with a costume contest, bust moves on the dance floor, and of course, eat some delicious Halloween-themed treats with rainbow-flag toothpicks for decoration.

“It’s a Halloween party hosted by LGBT students for LGBT students and their allies,” said QSU President Theo Rinaldi. “It’s just a place that people can get together, feel comfortable being themselves, have a sense of community, and just celebrate a pretty fun time of year after midterms and everything.”

Rinaldi is a psychology major with a minor in LGBT studies who attended the event dressed as Dipper Pines from the television show “Gravity Falls.”

“I’m just embracing that it might be a little bit silly,” Rinaldi said of his last-minute costume, “but I’m having fun.”

Rinaldi chose Dipper not just because he loves the show in general, but because he identifies with aspects of the character.

“He’s a little bit awkward, he’s funny, he’s smart, he’s hard-working, he panics a little bit but he always gets the job done,” Rinaldi said. “A lot of people count him out, say that he’s not really a man and that he sounds like a girl, and, I mean, same, but that doesn’t mean I’m not one, and it matters who you are on the inside.”

In addition to the Gravity Falls characters were some classic costumes like a witch and a cat, as well as more innovative or unconventional ones like a frat boy, Burt Macklin and Janet Snakehole from the show “Parks and Recreation,” and Rosie the Riveter.

“Everyone’s dressed as comic characters, and people are dressed as angels and characters from ‘Adventure Time,’ so I thought it was pretty cool, the amount of diversity there is,” said sophomore Arielle Lewis, who was dressed as Minnie Mouse.

Nico Dureza, freshman biology major, was most looking forward to seeing how creative everyone got with their costumes. He attended the event dressed as Yuri Katsuki from the anime “Yuri!!! on Ice,” and explained his love for the show.

“It’s really awesome because it’s about figure-skating,” Dureza said. “The main character and his coach get into a romantic relationship, and it’s two men, so it’s a really good representation of gay romance without the usual fetishization or queer-baiting that a lot of other media has.”

Dureza emphasized his particular feeling of representation in the character of Yuri himself.

“Yuri struggles with his self-image, with depression and anxiety, so I relate a lot to him,” he said. “I also have a boyfriend of my own, so it was really good to see someone like me on the screen.”

The party was about more than just costumes, though; attendees jumped on the dance floor when a song with major nostalgia factor like “I Write Sins Not Tragedies” by Panic! At The Disco was played; belted out the lyrics to songs from artists like Fall Out Boy, Beyoncé and Lady Gaga; and moved in a well-tuned crowd to line dances for songs like V.I.C’s “Wobble” and Mr. C The Slide Man’s “Cha-Cha Slide.”

During Madonna’s “Like a Prayer,” junior theatre studies major John Patterson ended up being the center of a dance circle, and pulled a perfectly-choreographed routine out of nowhere to the adoration of his audience.

“That was a lot of fun, I’ve always loved that song,” Patterson said. “I’ve honestly probably practiced that a thousand times in my room, no lie. So when I saw the chance, and I had the cape, I just took it. It was a lot of fun.”

Between songs was a game where contestants had to find a partner and wrap the person in an entire roll of toilet paper in two minutes, and acostume contest, which was won by freshman Quinn Remich, dressed as the Queen of Hearts.

“I didn’t have a costume and I really wanted one, so I went to the thrift shop and I just picked one off the wall, and designed something out of it,” Remich said. “It’s super exciting [to win] because I worked hard on the makeup, and I’m happy people enjoyed it.”

Patterson considered the night a resounding success; he said he was thankful to QSU and the student organization In the Life for introducing him to so many friends, and most enjoyed just having a good time with them.

“Being able to spend time and celebrate Halloween with my friends, who understand me and get me, it’s a lot of fun,” Patterson said. “I really feel like I can be myself.”