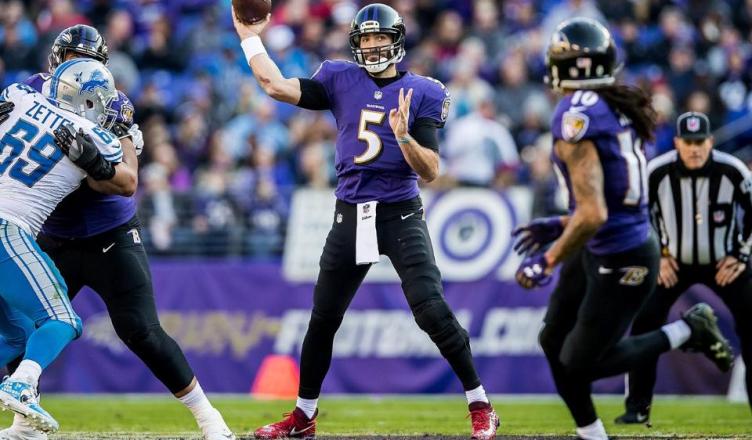 The Baltimore Ravens remain in the NFL playoff picture after a 44-20 win against the Detroit Lions Sunday afternoon at M&T Bank Stadium.

The Ravens got off to a slow start, but got on the scoreboard with a 38-yard field goal from kicker Justin Tucker near the end of the first quarter. Detroit looked to respond early in the second, but kicker Matt Prater shanked a 43-yard field goal.

Baltimore took advantage of the missed kick on the ensuing drive as quarterback Joe Flacco connected with wide receiver Mike Wallace for a 66-yard gain to put the team in scoring position. Flacco has had trouble with his accuracy on downfield throws this season, but launched a perfect bomb to hit his receiver in stride.

Flacco capped off the drive with a short touchdown pass to tight end Ben Watson, giving the home team a 10-0 advantage.

With a 10-point lead, the Ravens got aggressive on defense and gave Lions quarterback Matt Stafford several pressure looks.

On a Detroit third down attempt in the second quarter, safety Eric Weddle came off the edge on a blitz and jarred the ball loose from Stafford. Defensive lineman Willie Henry scooped up the ball to put Baltimore in excellent field position.

Later in the half, Flacco hit Wallace on a back shoulder throw near the sideline for a 23-yard completion. Flacco finished the drive with another short play action touchdown pass, hitting fullback Patrick Ricard in the flat for the score.

Tucker added a 46-yard field late in the second half, and the Ravens took a 20-0 lead into halftime.

The Lions came out of the break looking much more confident as Stafford marched his team downfield by connecting with multiple receivers. He found tight end Eric Ebron for a 12-yard gain to move his team into Ravens territory, then threw a deep ball to wide receiver Marvin Jones for 44 yards, putting his offense near the goal line.

On the next play, Detroit running back Theo Riddick scampered into the end zone for a four-yard rushing touchdown to give the road team some life.

Detroit struck again late in the third quarter as Stafford stayed hot and found his rhythm. He hit Ebron and wide receiver Golden Tate on a few intermediate routes, before running back Tion Green recorded his first career score on a six-yard touchdown run to make it a one-score contest.

With the Lions threatening, Baltimore responded with another strong drive. The Ravens have been inept offensively this year, but strong runs early in the game from running backs Alex Collins and Javorius Allen allowed them to open up their playbook.

After a few solid gains from the duo of running backs, Flacco found wide receiver Chris Moore down the middle of the field for a 23-yard gain. Collins capped off the drive with a seven-yard rushing touchdown, extending Baltimore’s lead to 14.

Stafford responded with another quick scoring drive as he found Jones and tight end Michael Roberts deep for gains of 46 and 23 respectively. Stafford connected with linebacker Nick Bellore on a goal line touchdown pass to narrow the score.

On Baltimore’s next drive, Tucker hit a 51-yard field goal to give his team a two-score lead late in the fourth. Looking to seal the game, Baltimore cranked up its intensity on defense after a sideline rally orchestrated by linebacker Terrell Suggs.

The home team’s pass rush pressured Stafford and forced him into an errant throw that was intercepted by cornerback Marlon Humphrey. Humphrey had been picked on several times earlier in the game, but came through with the game-sealing play.

Collins registered his second rushing touchdown of the day after the turnover, and Baltimore held on for the win.

Baltimore looks to stay in the playoff hunt as the team goes on the road to face division rival Pittsburgh Sunday, Dec. 10, at Heinz Field. Kickoff is set for 8:30 p.m.