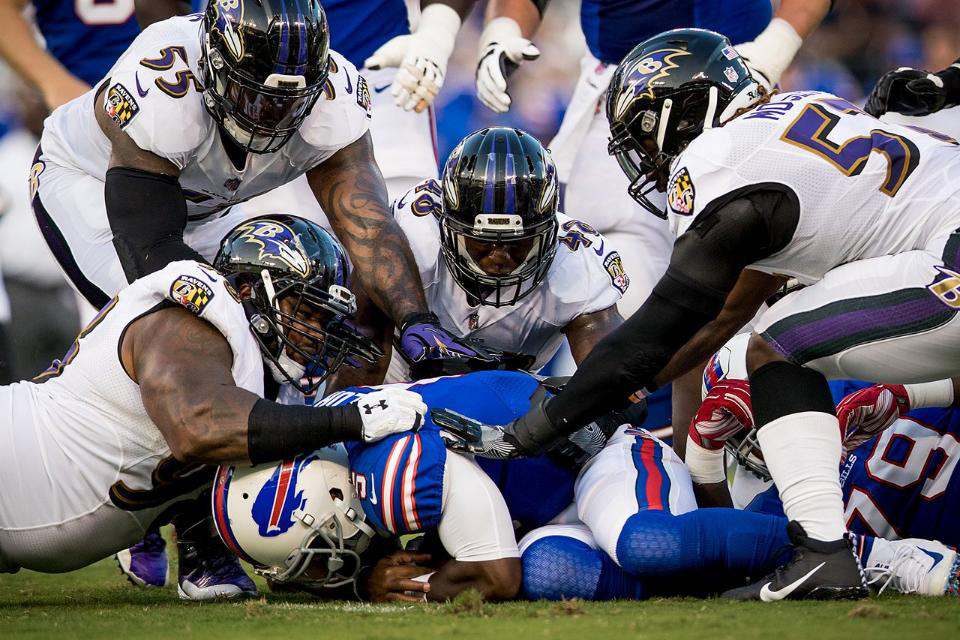 The Baltimore Ravens advanced to 3-0 in the preseason with a 13-9 victory over the Buffalo Bills Saturday night at M&T Bank Stadium.

The third preseason game typically sees the starters playing an extended amount of time, and the team did not disappoint.

The starting defense put on another dominant performance, giving up only 36 yards through four drives.

The Ravens forced a quick three-and-out on the first drive, and on the second drive outside linebacker Matthew Judon sacked former Ravens quarterback Tyrod Taylor, knocking him out of the game.

Buffalo moved the ball well on its third drive of the game and advanced into Baltimore territory. However, Baltimore’s defense clamped down and forced Buffalo to punt the football.

Hill recorded an interception and two tackles. He showed good awareness and trusted that the safety was behind him on the cover-two zone.

Onwuasor had an outstanding game. He finished with two tackles, one assisted tackle, a forced fumble and the game-sealing fumble recovery.

Both Onwuasor and Hill will likely make the 53-man roster. Onwuasor even has a chance to start alongside linebacker CJ Mosley this season if he continues to play well.

On the offensive side of the football, undrafted quarterback Josh Woodrum continued his impressive preseason.

The Ravens decided to put Woodrum in with the first-team offense just four series into the game and Woodrum did not back down under pressure. He finished the game completing eight-of-13 passes for 55 yards and a touchdown.

Woodrum connected with undrafted running back Taquan Mizzell on an angle route for a 16-yard score and the Ravens only touchdown on the night.

The Ravens look to go undefeated in the preseason with a contest against the Saints on Thursday Aug. 31, at 8 p.m. inside the Mercedes-Benz Superdome.