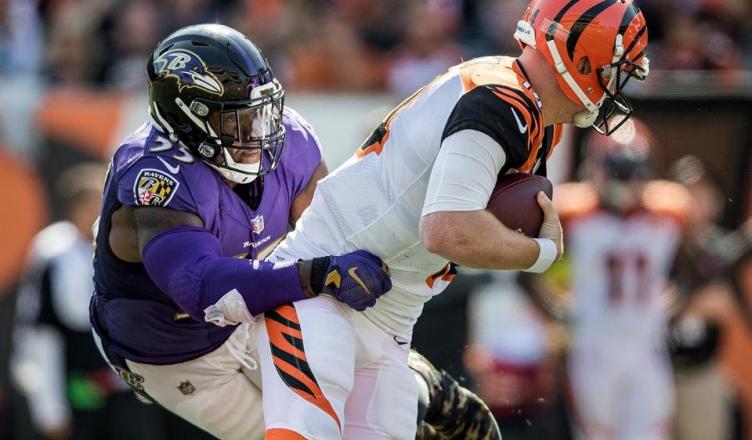 In today’s NFL, it is difficult to compete without a good defense. This is a passing-oriented league, and if you don’t have the requisite weapons on defense, your team will find itself losing games. One game into the season, that does not seem to be a problem for the Baltimore Ravens.

Baltimore (1-0) put on a dominant defensive showing with a 20-0 victory against Cincinnati (0-1) Sunday afternoon at Paul Brown Stadium. The win marked the first time Baltimore has won in Cincinnati since 2011.

Linebacker Terrell Suggs led a unit that was able to fluster Bengals quarterback Andy Dalton the entire game, sacking him five times and forcing over 30 hurries. Suggs finished the game with five tackles, two sacks and a key forced fumble.

The Bengals found themselves in scoring position on their opening drive in the second half, but Suggs came up with a strip-sack on Dalton. Defensive tackle Michael Pierce recovered the fumble for the Ravens.

The defense stressed tipping passes in order to create turnovers all throughout training camp, and it paid off this game when linebacker Patrick Onwuasor tipped a pass that ended up being intercepted by defensive back Brandon Carr.

On the few plays when the front seven didn’t apply pressure, the secondary played airtight coverage. The Ravens’ defensive backs seemed to know exactly what the Bengals were running and covered their routes well the whole day.

The offense had a decent performance considering the circumstances. There was worry from Ravens fans that starting quarterback Joe Flacco would play poorly since he didn’t play a single snap in the preseason, but that didn’t happen.

Flacco was solid all day, completing 9-of-17 passes for 121 yards and a touchdown. His best play came on a touchdown strike to wide receiver Jeremy Maclin.

Flacco read the defense and surmised they were coming with an all-out blitz so he audibled the play and hit Maclin for a 48-yard catch and run.

The Ravens kept the ball on the ground for much of the game, running the ball 42 times for 157 yards. A bulk of those carries came on an 18-play drive in the third quarter that took nearly 10 minutes off the clock. The drive ended with a field goal, but it demoralized the Bengals heading into the final quarter.