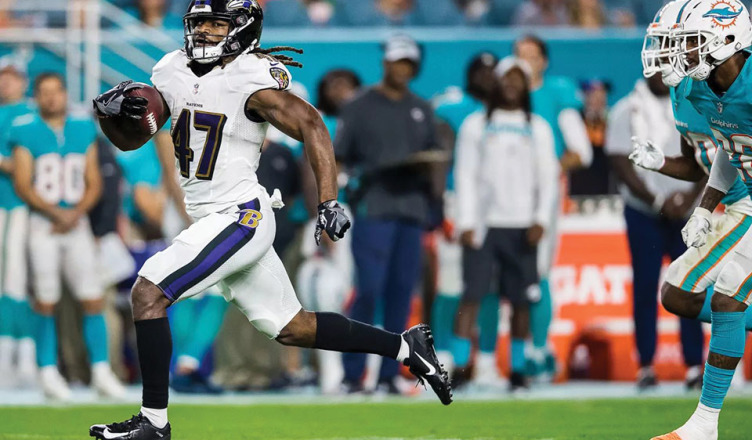 The Baltimore Ravens captured a 27-10 victory over the Miami Dolphins Saturday night at Hard Rock Stadium thanks to a breakout performance by rookie quarterback Lamar Jackson.

Jackson finished the game completing seven of 10 passes for 98 yards and one touchdown. He also added three rushes for 39 yards and a rushing score.

Quarterback Robert Griffin III started the game under center for Baltimore. He continued his impressive preseason, racking up 101 yards from scrimmage including 41 on the ground.

Though Jackson has displayed unique raw athletic talent throughout the preseason, Griffin has shown good poise and appears viable as a backup option if the Ravens opt to keep three quarterbacks on the roster.

Baltimore started the game with possession and marched down the field, but in a rare occurrence kicker Justin Tucker missed a 51-yard field goal wide left. The Dolphins blocked Tucker’s next field goal attempt, but couldn’t put points on the board until early in the second quarter.

After running back Kenyan Drake burst out on a tough 30-yard run, quarterback Ryan Tannehill converted on three short passes using the no huddle to put Miami in the red zone. The home team capitalized on the scoring position as Tannehill found wide receiver Danny Amendola on a short crossing route for a 16-yard touchdown.

The Ravens responded with an eight-minute drive that resulted in a 22-yard field goal to make the score 7-3.

Drake made another impressive play as he lined up as a receiver and hauled in a 36-yard reception to put the Dolphins in scoring position just before halftime. Miami nailed a 33-yard field goal to take a 10-3 advantage going into the break.

Jackson entered the game to kick off the second half and immediately made an impact as he scrambled 13 yards for a first down on his first third down of the game. Baltimore would go on to score on that drive as running back De’ Lance Turner burst up the middle for a 65-yard rushing touchdown, knotting the score up.

Later in the third quarter, Jackson showed off his running instincts as he scrambled right for a 19-yard rushing touchdown to give the Ravens a 17-10 lead.

Once he noticed that no one was open he immediately adapted a runner’s mindset and dove in for the score. However, Jackson has not shown the ability to slide yet so far this preseason and that could raise injury concerns.

Jackson capped off his strong showing early in the fourth quarter when he found wide receiver DeVier Posey on a drag route for a 21-yard touchdown to seal the victory for Baltimore.

On Monday night, Baltimore’s starters put together a convincing performance on both sides of the ball in a 20-19 win over the Indianapolis Colts at Lucas Oil Stadium.

Quarterback Joe Flacco looked sharp on the evening as he finished with 72 passing yards and one touchdown through the air.

The Colts struck first as kicker Adam Vinatieri ripped in a 57-yard field goal, but the Ravens responded on the following possession as Flacco found wide receiver John Brown over the middle of the field for a seven-yard touchdown.

Brown bobbled the pass initially, but managed to reel it in with one hand and drag his feet to stay inbounds.

Indianapolis answered back with a six-play touchdown drive midway through the period, but Tucker hit a 38-yard field goal to make it a 10-10 contest heading into halftime.

Jackson took over the reigns in the second half, but had a poor showing on the night. He struggled to drive the ball down the field, causing a few of his passes to flutter in the air.

Despite his struggles, he was able to connect with wide receiver Chris Moore early in the half on a seven-yard touchdown to take a 17-10 lead.

Kicker Kaare Vedvik converted a 48-yard field goal to extend Baltimore’s lead to double digits, but the Colts stormed back in the fourth with a field goal and late touchdown. The Ravens made an impressive stop at the goal line to halt Indianapolis’ two point conversion and secure the win.

The Ravens close out the preseason by hosting the Washington Redskins Thursday night at M&T Bank Stadium. Kickoff is set for 7:30 p.m.