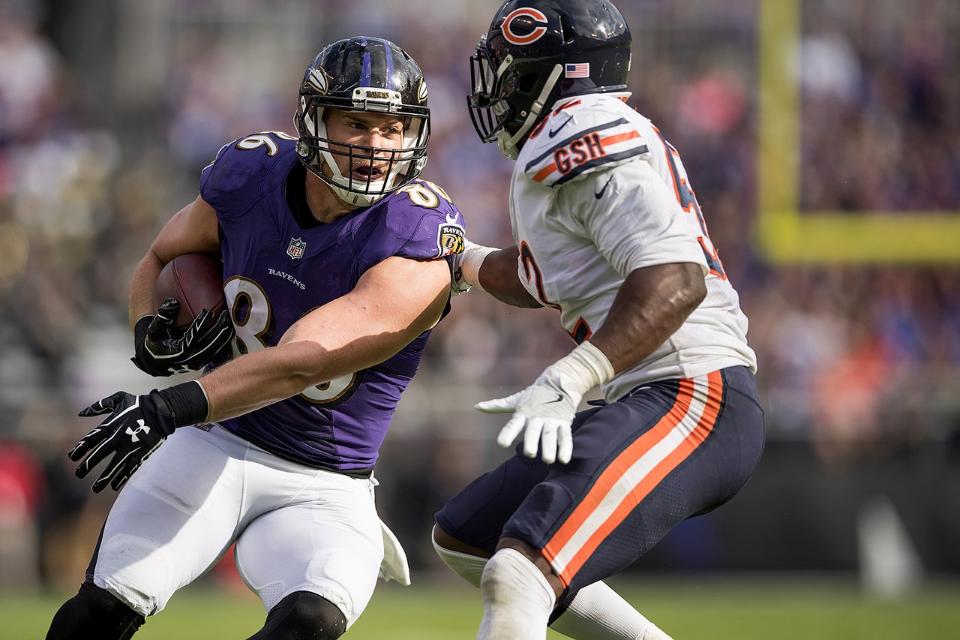 The Ravens (3-3) had a porous offensive showing, while the Bears (2-4) established a balanced offensive attack and played a physical brand of defense.

Quarterback Joe Flacco and the offense sputtered in the first quarter, compiling just 31 yards over their first three drives. Chicago moved the ball downfield consistently, and tacked on a 24-yard field goal early in the second quarter to take a 3-0 lead.

Baltimore committed costly turnovers on its first two possessions of the game. On third down, Flacco connected with tight end Maxx Williams, but Williams fumbled the ball while fighting to move the chains against linebacker Christian Jones. Linebacker Danny Trevathan recovered the ball for the Bears.

On Baltimore’s next drive, Flacco threw an interception on a downfield throw intended for wide receiver Breshad Perriman. Perriman went low to secure the catch, but tipped the pass into the air where Chicago safety Bryce Callahan made the diving pick.

Chicago took advantage of the great field position set up by the interception with some crafty playcalling. Running back Tarik Cohen connected with tight end Zach Miller for a 20-yard touchdown on a halfback pass to put the Bears up 10-0.

Baltimore did put up a field goal just before the half to get on the board and make the score 10-3 going into the break.

Midway through the third quarter, Bears quarterback Mitchell Trubisky got his team on the board with a 27-yard touchdown rollout throw to tight end Dion Sims to make it a 17-3 lead for the visitors.

Just when the Ravens needed a big play, running back Bobby Rainey returned the ensuing kickoff 96 yards for a touchdown. This was the first kickoff return for a score in the NFL this year, and it put Baltimore down by just one score.

Late in the third quarter, safety Eric Weddle forced a fumble and defensive tackle Michael Pierce recovered the ball to put Baltimore in its opponent’s territory. Instead of tying the game, the Ravens had to settle for a field goal.

On Chicago’s next drive, Trubisky was strip sacked when defensive back Lardarius Webb came free on a blitz. Linebacker C.J. Mosley recovered the ball to put the offense at midfield, but Baltimore gave the ball right back to Chicago.

Flacco threw his second interception of the day on a sideline pass to wide receiver Chris Moore. The pass was bobbled into the air until safety Adrian Amos hauled it in and returned the ball 90 yards for what looked like the winning score.

The Ravens attempted a late fourth quarter rally when kicker Justin Tucker booted a 50-yard field goal to make it a one-score game with just under three minutes remaining. Baltimore’s defense made a huge stop on the next possession to force a punt and get the ball back.

On the punt return, Baltimore wide receiver Michael Campanaro took the ball 77 yards for the team’s second special teams touchdown of the day. The Ravens scored on the the two point conversion and went into overtime tied with the Bears 24-24.

In overtime, Chicago won the toss and elected to receive on its first possession. However, Baltimore’s defense stepped up early and forced the Bears to punt.

Baltimore got the ball in excellent field position on a shanked punt and only had to score a field goal to win, but the team couldn’t muster a first down and were forced to punt themselves.

On Chicago’s second possession of overtime, the team worked its way down the field where kicker Connor Barth eventually knocked through a 40-yard field goal to win the game.

The Ravens look to bounce back Sunday, Oct. 22, when they travel to face the Minnesota Vikings at U.S. Bank Stadium. Kickoff is set for 1 p.m.