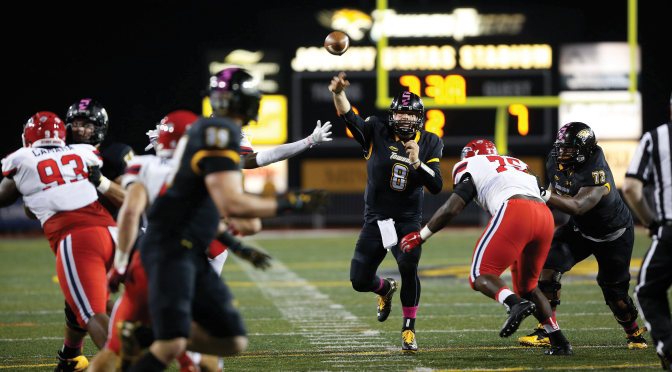 “While we were much better at protecting the ball than we were a week ago, we weren’t good enough to beat a CAA team at home,” Head Coach Rob Ambrose said. “We’ve got a lot to learn, but I think we understand who we are and who we can be against very good league play.”

Towson got the ball on its own 33, and took advantage of the good field position thanks to big plays from the team’s stable of rushers. Freshman running back Adrian Feliz-Platt got the drive started with a 15-yard carry.

Later in the drive, fellow freshman running back Kobe Young added a 27-yard run to put the Tigers in the red zone. Young capped off the drive a few plays later with a two-yard touchdown run, the first of his career.

“I see two really good, talent backs that are going to be a handful in a couple of years,” Ambrose said. “They were a little bit of a handful tonight.”

Towson looked to score quickly as redshirt freshman quarterback Ryan Stover connected with freshman wide receiver Ryan Dorsey for a 73-yard gain on the first play of the team’s second drive. However, the team couldn’t finish the drive and had to settle for a 29-yard field goal from sophomore kicker Aidan O’Neill.

The Seawolves added a field goal midway through the second quarter to knot the score at 10. Both teams struggled to move the ball for most of the quarter, and field position was the significant determinant in scoring drives.

Stony Brook junior wide receiver Donavin Washington returned a punt 18 yards to put his team in Towson territory with under three minutes in the quarter. Stony Brook executed a two-minute drive and scored a touchdown just before halftime. The extra point attempt failed, but Stony Brook held a 16-10 lead going into the break.

The Seawolves continued to score in the third quarter, tacking on a 42-yard field goal early in the period to extend their lead.

Towson answered back with a 13-play drive that took most of the third quarter, and ended with a one-yard rushing touchdown from senior running back C.J. Williams. Redshirt sophomore Brent Richardson made a spectacular one-handed catch for 19 yards on the drive, and Williams recorded his first touchdown as a Tiger with his score.

Stony Brook scored a field goal early in the fourth quarter to make the score 22-17. Towson looked to march downfield and capture the lead, but turned the ball over on a critical fourth down with five minutes left to play.

The Seawolves chewed the clock and added another field goal to gain a 25-17 lead. The Tigers got the ball with under two minutes in the game, but failed to drive downfield to tie the game.

“I thought Ryan played well for the most part,” Ambrose said. “I think he made a couple of mistakes down the stretch that hurt us that showed his inexperience, but for the situation we are in, far away from home, having so many guys down, I’m proud of our guys.”

Towson looks to rebound next week when the team host Villanova at Johnny Unitas Stadium Saturday, Sept. 30. Kickoff is slated for 6 p.m.

“[We prepare for Villanova] just like all the other ones,” Ambrose said. “By the time we get to Sunday night, moment’s over, go to bed, take what we did right, learn from it. Take what we did bad, learn from it, grow from it in both cases and come back to work on Tuesday.” 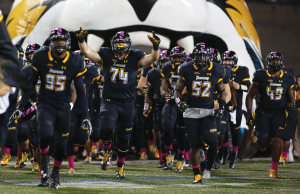