“We just could not stop them, and Santa Ana looked like Steph Curry out there today,” said Head Coach Pat Skerry. “We obviously were not good offensively; but credit to Elon, we are not beating anyone if they make 18 threes.”

Elon senior guard Steven Santa Ana finished with a career high 34 points to go along with 10 rebounds and nine assists. As a team, Elon made 18 three-pointers, tying its program record for most three-pointers against a Division I opponent. Santa Ana hit seven of the 18 total threes.

The Tigers struggled to defend Elon from the very beginning as Elon scored the first nine points of the game. Towson allowed Elon to shoot 56.9 percent from the field and 52.9 percent from three-point range for the entire game.

On Thursday night, Towson fell 67-65 at the hands of William & Mary (14-16, 10-8 CAA) despite the Tigers having two chances to tie or win the game in the final 12 seconds. Neither team scored a basket in the final two minutes and 42 seconds of the contest.

“It’s a tough one. I am a little disappointed in myself,” Skerry said. We have had a lot of these close losses, but these guys are playing hard while fighting through injuries and being banged up.”

Fobbs finished with a game-high 22 points on 50 percent shooting while pulling down six rebounds. This game marks the 12th time Fobbs has scored at least 20 points.

Junior guard Tobias Howard Jr. turned it up a notch in crunch time as he scored 11 of his 13 points in the second half.

“Tobias has been doing a good job coming off the bench giving us a spark because he is a capable shot maker,” Skerry said.

Eight of Towson’s losses have been by six points or fewer.

The losses this past weekend place Towson as the ninth seed in the 2019 CAA tournament presented by Jersey Mike’s in North Charleston, South Carolina. Next Saturday afternoon, the Tigers will take on the eighth-seeded James Madison at 4 p.m. Both teams split the season series with each team winning at home. 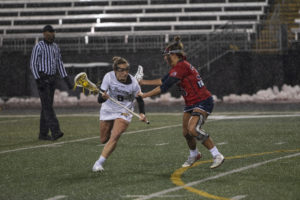