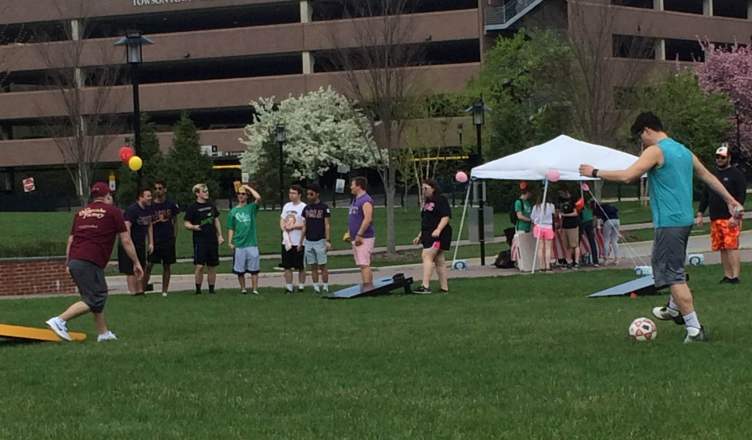 Photo by Jason Thompson/ The Towerlight

Towson University community members raised money to fund cancer research and support people with cancer and their families on April 5 at the Relay for Life, the signature fundraiser for the American Cancer Society.

The overnight relay began at 3 p.m. on Saturday and continued throughout the night into the early morning hours of Sunday, eventually coming to an end at 3 a.m.

“I just like walking and talking with everyone,” Towson alumna Maria Campbell said. “The stories I hear about those that have fought cancer are really something, and that’s what it’s all about.”

Relay for Life has become a Towson tradition since the University first hosted it in 2008.

“The relay is 12 hours long and it is done in teams, so there is always one person on the track,” student volunteer and math major Lily Fontinell said. “While you are walking, there are activities and food in the center of the track for the other teammates.

The first Relay for Life wasn’t a relay at all, but rather the feat of one colorectal surgeon named Gordon Klatt in Tacoma, Washington.

“It began with a doctor that ran around a track for 24 hours to raise funds for cancer research,” Fontinell said. “The next time he ran, nurses and other health professionals came with food and set up tents in the middles of the track to sleep in.”

According to the Relay for Life website, participants in this year’s relay at Towson raised over $26,000 to help struggling families and fund groundbreaking research in new ways of diagnosing, preventing and treating cancer.

Emily Miller, event coordinator for Relay for Life, said the money raised during the relay can help ease the financial burden for cancer patients and their families.

“A lot of people don’t think about the traveling some families have to do to get the care they need,” Miller said. “To help these families travel to hospitals that can provide them the treatment necessary, the American Cancer Society began paying for travel costs and built lodging areas close to hospitals so families can stay together. All the funds go toward the American Cancer Society, and it feels great to help and be part of the organization.”

According to the Relay for Life website, the first lap of the relay is for cancer survivors and those currently battling cancer. The following lap is for health professionals and caregivers that have provided support to those struggling.

The website also says that as time passes and sun begins to set, the darkness is symbolic of the fear that cancer patients feel when diagnosed. During the dark hours of the relay, luminarias are lit in remembrance of those lost, and to show those who have been affected that they are not alone.

When the relay came to an end, volunteers were recognized and everyone was reminded that Relay for Life will not end until the battle with cancer is won.