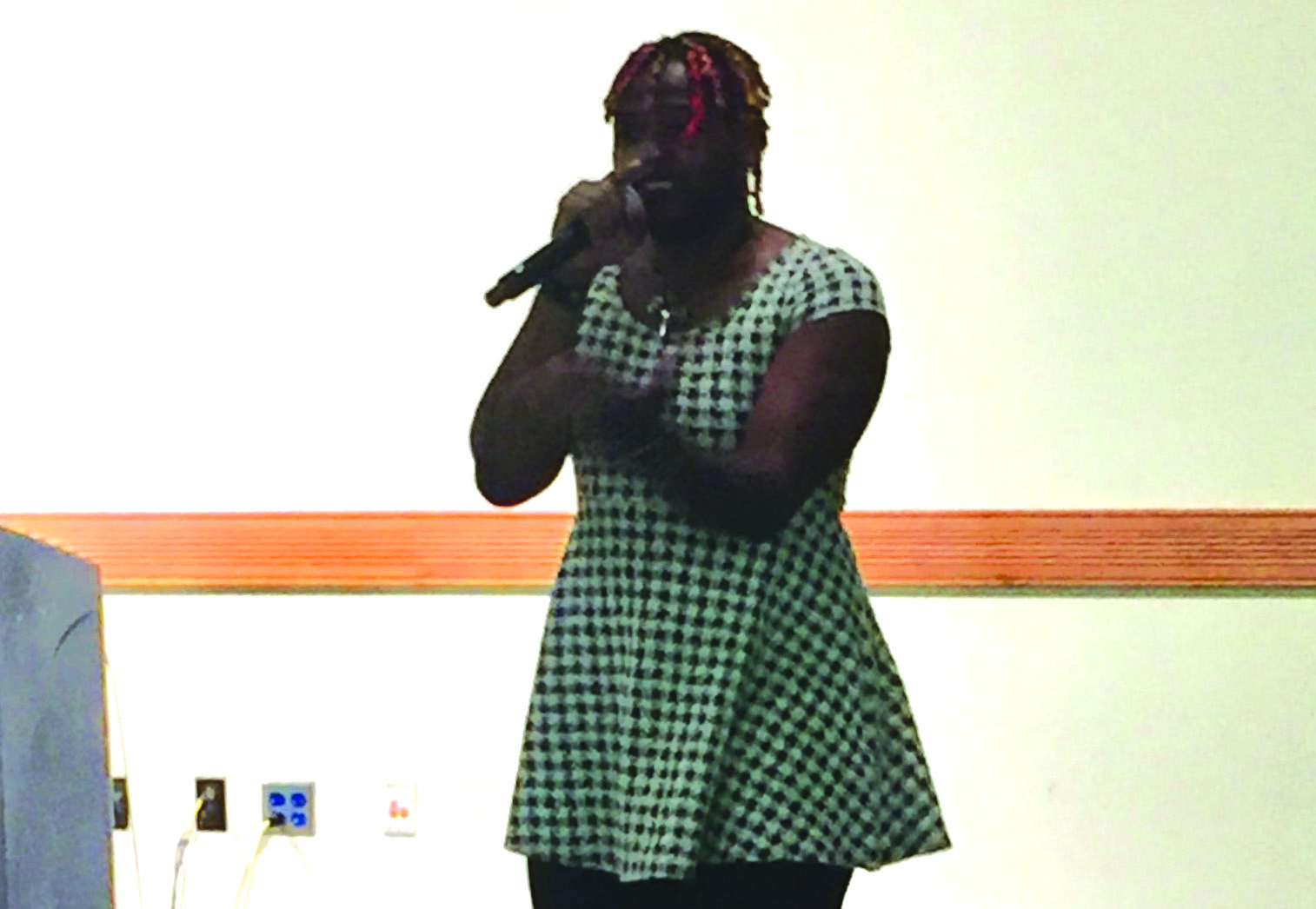 While Transgender Day of Remembrance is celebrated nationally Nov. 20, the Center for Student Diversity invited students to acknowledge the occasion with spoken word and discussion Nov. 17, before campus started shutting down for Thanksgiving break.

“A lot of times when we think of LGBTQ+, we do different kinds of programs but we forget our trans community,” CSD Associate Director Mario Rodriguez said. “So this is a national day where we really try to create awareness of what different trans populations are going through.”

During the event, hosted in the West Village Commons, poet and percussionist Vita E. performed hip-hop and spoken-word poetry and shared her experiences as a black trans woman with neurodivergence, meaning that she has multiple mental illnesses.

“I wanted to make sure this was centered very much around the trans experience,” she said as she introduced her first poem, ‘To Name a Flower.’ “This one is about names, and how names are very important to trans people.”

In her poem, Vita shared a memory of being rung up at a drugstore makeup counter, and having the cashier trying to guess her nickname based on her legal, male name on her ID.

Vita left the store, by giving the cashier “the furthest thing from my truth and the closest thing I know she’ll expect,” she recounted.

She communicated to the audience how powerful both names and pronouns are for trans people.

“A lot of the time we don’t know when we have a student who might be in transition, and I think that’s why gender pronouns are really important,” Rodriguez said. “You know, I can look like a man, perceived as a man on the outside, but what are my gender pronouns, and really the way that I feel? I think that’s what’s important, because we don’t talk about it as often. Everything’s very binary: male, female. Programs like this really create awareness of things we don’t talk about on a daily basis.”

In a later poem, “Rx,” Vita E. played a percussion drum while shaking pill bottles like maracas, and spoke about the stigma of mental illness.

She also recited poetry about identity, and her personal experience being non-binary, or not exclusively masculine or feminine. She says she’s trying out a new label called “stud-femme.”

“I’m often told my femme is only validated when I wear a skirt… Does my gender norm have a face?” she asked the audience. “I am not a gender rubric waiting to be graded.”

Her poetry and hip-hop reflected not only her experiences with identity and stigma, but also black trans erasure, and the struggle of being both black and trans. “The black lives that never get riots…Building safe spaces that we are not welcome in,” as she put it.

After reading her poems, she rapped the names of the transgender people who have lost their lives this year to violence and hate crimes.

“It’s really powerful to hear the stories and even within ourselves, really see how these identities have similarities but also differences, in things that we may never have experienced, but it is someone’s experience, so being open to that,” Rodriguez said. “Some of us don’t have the same privileges as [others] do.”

Rodriguez said that students wanted to hear from a member of the trans community and an activist in the Black Lives Matter movement, which is why Vita was booked. The event was also organized so that a Q&A discussion preceded her performances, instead of following it.

“A lot of times people might not be familiar with the trans community, so we wanted to make sure people felt comfortable to ask questions, and that’s why we flipped it around,” Rodriguez said. “We really wanted to focus on getting to know the artist first, [and] her getting to know our Towson community.”