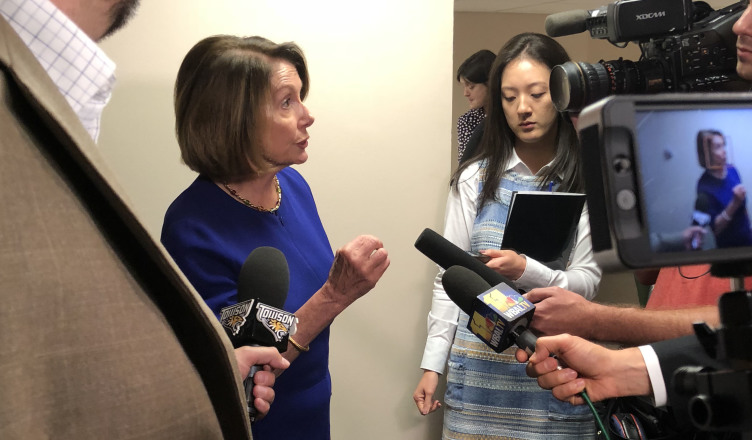 Rhetoric and Communication professor Richard Vatz invited the politicians to speak to and take questions from students.

Pelosi had strong opinions regarding the political issues circulating the nation. She implored the student audience to get out and vote, saying voting is the way to make their voice as strong as possible.

Before the floor was opened to student questions, Pelosi expressed how impressed with Towson’s diversity she was.

“I love seeing all the diversity in this room,” Pelosi said. “That is our strength and unifying factor. We have a responsibility to our founding fathers to find a common ground and reassert bipartisanship politics in Washington.”

The first question asked by the student audience was about gun control.

“We need to work in a bipartisan way to get background checks for gun purchases,” Pelosi said. “The mass shootings are terrible, but passing this bill will subdue the gun violence in our cities by not allowing people to buy guns who shouldn’t have them. More lives are saved by keeping guns out of the hands of those that shouldn’t have them than by listing guns that shouldn’t be for sale.”

After answering questions about the deficit, she and Ruppersberger had a few closing remarks.

“Your authenticity is everything,” Pelosi said. “Shape your values for your success and for the people you care about and want to support.”

“Treat others how you want to be treated,” Ruppersberger said. “That’s the golden rule. We are working toward meeting at a middle ground in Washington. Everyone needs to practice civility, even if you disagree with someone’s views.”

After sending the students back to class, Pelosi and Ruppersberger answered questions from local news stations about the Brett Kavanaugh situation, and their thoughts about the question and answer session with the students.

Kavanaugh, who is still facing allegations of sexual misconduct from Christine Blasey Ford, Julie Swetnick, and Deborah Ramirez, has since been confirmed to the Supreme Court.

“We have to question the integrity of the Supreme Court and everyone involved ,” Pelosi said. “Kavanaugh says Trump is above all and that’s not fair, not equal. I, as a woman, know many are affected by this and many feel their voice is diminished and mocked by our president.”

Ruppersberger agreed that the issue is concerning, and hopes that the different parties can come together to find a solution.

“This is a major issue,” Ruppersberger said. “The president should want an investigation. There are allegations on both sides and Kavanaugh having drunk a lot when he was younger may not remember events correctly. The court needs to be bipartisan. Kavanaugh’s statements about the Clintons show his partisanship.”

Before departing, Pelosi and Ruppersberger said they enjoyed being at Towson and answering well-informed questions from the students.

Vatz said he, too, was proud of the students.

“The students asked excellent questions,” Vatz said. “Dutch and Nancy has extraordinary presentations, and this was a wonderful opportunity for Towson and the students.”

Jake Goodman, a political science major with a minor in geology, took a picture with Pelosi after the event.

“I found out about this from my congress class and decided to sit in on the guest speaker,” Goodman said. “It’s not everyday you get to meet Nancy Pelosi. She was very insightful and informative.”