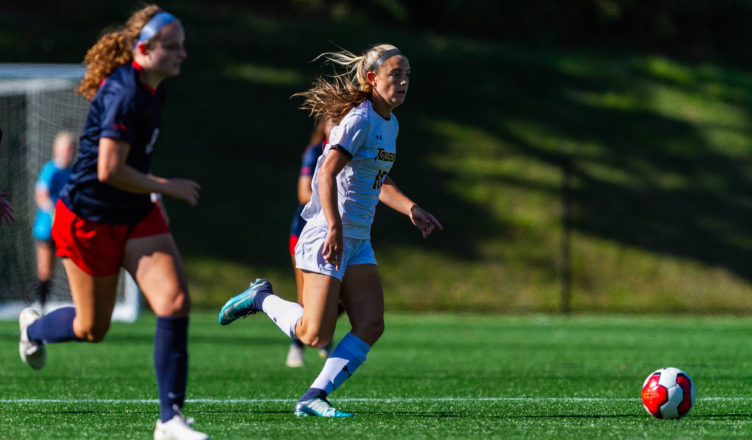 Entering their game against Richmond, Towson wanted to get back on their feet after going winless in the previous three games, as the team had been outshot in the previous two matches, 44-13. In contrast, the visiting Spiders (4-3-2) were on a three-game unbeaten streak.

Given that Friday evening’s fixture with Richmond would be the last for the Tigers (3-5-1) before entering their conference schedule, they knew they had to take their chances right from the start if they wanted a chance to come out with a win.

The opportunities came early for the Tigers and it took less than 5 minutes for sophomore forward Jenna Blank to open the scoring when she powered her way towards goal from the right side of the box, outmuscling her defender for possession in the process just before placing the ball low and under the keeper, and the sophomore was just getting started.

Less than five minutes later, Blank would get help from senior midfielder Moriah Wigley, who was able to beat her opponent to a loose ball after Towson cleared a free kick out of the box and near the left sideline. Racing down the left wing a few yards out for the touch line in Towson’s defensive zone, Wigley then dribbled the ball to midfield setting up a counter attack before sending a great through ball to lead Blank, who was racing to beat the Spider goalie to the ball. Blank took a few dribbles for control and  shot on an empty net to put the Tigers up by two goals in the 9th minute.

Head coach Katherine Vettori was pleased with the teams performance, and Wigley’s effort was no exception.

“We work on passing every single day and keeping possession and Moriah [Wigley] had a fantastic performance today just with keeping the ball but turning and going at players and winning her 1v1 battles,” she said.

The Spiders had a great chance to cut into the Towson lead less than two minutes later when a Richmond forward was given space to shoot from inside the left corner of the 18-yard box, but the chance evaporated, and the ball swerved away to the right of the far post.

The closest chance the Spiders had to staining the Tiger’s clean sheet came in the 13th minute, when a Richmond corner kick from the right side lobbed its way to the far post, just in front of the goal. A swarm of players clustered to the ball, as a Richmond player redirected the ball right at goal.

However, freshman goalie Lindsey Pazdziorko, who was named as last week’s CAA ‘Rookie of the Week,’ made a great reaction save, going down low quickly to block the would-be goal, as the Tigers cleared the ball to safety.

For the next 20 minutes, Towson’s defense made Pazdiorko’s job easier as their back line stayed organized and strayed away from the miscues and momentary lapses that had come back to bite them in recent outings.

“Jacey is probably our most consistent performer,” Vettori said. “From game to game, she gives that solid effort, and is just calm and cool on the ball.”

In the 19th minute, senior forward Christiana Davey made a cross-field pass from the left wing between the Spiders box and midfield pass to lead a running Blank, who struck the ball, but was denied as Richmond’s goalkeeper had come off her line to take away the angle.

Blank didn’t wait much longer for her third tally on the evening, as Logan shielded the ball from a defender in Towson’s offensive zone before dishing it over to her teammate from the right wing. From about 30 yards out from goal, near the corner of the box, Blank zipped diagonally towards the net before taking a look up to see where she wanted to shoot. The ball struck its far post target from about 15 yards out as the Tigers claimed a 3-0 lead in the 36th minute.

Blank’s third tally was historical, for two reasons; She’s the first Towson women’s soccer player to record a hat trick in a game since Holly Noga during the 2001 season and she’s the first ever women’s player from Towson to reach that feat in a single half.

“I think we’re just trying to keep the ball and attack in numbers and we’ve talked about taking on 1v1 when you’re outside and trying to get into the box and I think that we executed that well today,” said Vettori.

Blank’s milestone would take an unfortunate stumble early in the second half when a chase to win back possession resulted in an awkward fall that saw the sophomore land hard on her knee in the 52nd minute, resulting in her needed assistance to get helped off the pitch.

“She’ll get assessed by the orthopedic tomorrow”, said Vettori. “We’re hopeful it’s just a very awkward step on the ball that’s just tender and nothing else to it.”

When the game’s final whistle blew, Towson had outshot the Spiders 12-10, doubling them up when it came to putting the ball on frame 8-4. In addition, Pazdiorko’s performance was the second shutout the freshman has posted for a full match this season.

Towson’s schedule is going to get even more competitive now, as the Tigers open conference play in the Colonial Athletic Association (CAA) as they head up to Boston for a meeting against Northeastern on Thursday, Sept. 26 at 3 p.m.

Logan, and perhaps her teammates alike, will look to Thursday afternoon’s result when thinking about the prospects of upcoming opponents.

“I think today we needed this win just to get into a good energy into conference, so that’s a good start,” she said. “Finishing gives us more of an incentive to shoot to score next week.”