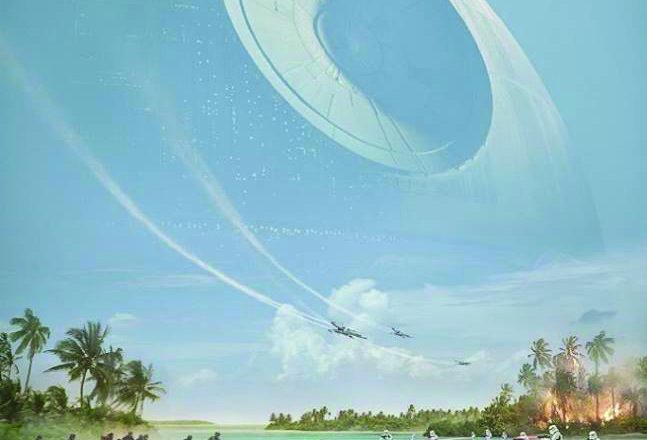 “Rogue One: A Star Wars Story,” the first in the new “Star Wars” anthology, aims to offer the universe a more complete and historical background, particularly about the creation of the Death Star. But while the movie offers more depth to the plotline and backstory of the universe, it fails to deliver the same for its characters.

“Rogue One” details the building of the Death Star, the well-known powerful weapon capable of destroying whole planets, and the Rebellion’s mission to retrieve its blueprints. Led by Captain Cassian Andor and Jyn Erso, an orphan whose father was recruited to design the Death Star, the team must obtain these plans to understand how to destroy it.

Let me get right into the flaws of this movie — and some are major. In one word, the movie is flat. None of the characters are adequately fleshed out. Every single person on the team, or in the entire movie, is just a face and a name. The only character that has any sort of depth is Jyn Erso, played by Felicity Jones, and that is solely because she is a carbon copy of Rey from “The Force Awakens.” Even when filmmakers open up the door to her childhood and have multiple opportunities to expand on it, they gloss over it in a few minutes and never look back. Right after I saw the movie, I knew where they could’ve shown a little more. For example, when an idea of hers is shot down — instead of cutting right to the next scene where a few people decide to follow her lead anyway, filmmakers could have added a scene in the middle where she is angry, and we get a flashback to a moment in her childhood when she felt this way.

I know it may seem like I hate this movie after that, but actually besides these larger issues, the movie had some very good aspects to it. First, the characters may not be that complete, but some are pretty awesome when it comes to fighting. Chirrut Imwe may be blind, but does not fight like it. Another great aspect of this movie was the fact that it solved a huge question from “A New Hope” that I will leave unnamed, but know that they did it in a clever way that adds to the story. And no one can deny, the best scene in this whole movie stars, of course, Darth Vader. He was sort of a tease in the movie, but one scene in particular makes up for it.

The best aspect of this movie, however, is by far the cinematography. While the first half of the movie is confusing and almost very slow-paced, the second half, which is mostly the battle, is beautifully shot, consisting of ground level (and relatable) shots of AT-ATs, first-person perspective shots of ships flying and an all-around incredible direction of the fighting.

I honestly did like this movie, but it was just a shame that they put so much focus on the visuals at the end and not enough on the characters themselves. This may be a direct result of the Disney-fied reshoots which, as much as I love Disney, should never have existed. It’s not worth it to reboot the series if the gravity and dignity of the universe is going to be compromised by lightened content. With the introduction of a new very funny, Sheldon Cooper-like droid, and the small, but not overbearing references to older “Star Wars” movies, “Rogue One” proves to be an entertaining and cinematographically stunning “Star Wars” movie that adds to the canon. But without any depth to any part of this movie, that’s all it ends up being: galactic eye candy. It’s definitely not the worst “Star Wars,” but it’s not the best one either. 2.5/4