“I thought today was a really, really great battle,” head coach Sonia LaMonica said. “Two great teams, a lot of back and forth. Overall I’m proud of the effort our team put forth today. Some things we gotta clean up no question, but we’ll learn on that.”

The Tigers (0-1, 0-0 CAA) scored the first goal about 90 seconds in the game as Pearre scored her first collegiate goal.

“What we’ve known all along about Blair Pearre is that she’s a competitor,” LaMonica said. “She’s not someone who gets intimidated. She’s a fighter and a competitor and she plays that way whether it’s practice, whether it’s games. Whoever the opponent is doesn’t really matter. So that’s one of the reasons why Blair is on the field as a freshman as a middie which isn’t easy to do.”

The Nittany Lions responded with a goal seven minutes later, and it led to a 3-0 run by Penn State. The Tigers responded with their own 3-0 run including two goals by Stack.

“I think it was the momentum of the team at the time,” Stack said. “We were all up, we were getting the draw. Defense was coming up with some big saves and my teammates were setting me up to score which I couldn’t do without the other girls on the field.”

To end the first half, Penn State went on another 3-0 run and held the Tigers off the scoreboard for nine minutes until Hobbes scored the final goal of the first half.

Towson’s last shot of the first half sailed wide of the net, as they took a 9-6 deficit into halftime.

The second half was defensively focused on both sides, through 15 minutes there were seven combined shots on goal compared to the 25 combined before halftime.

“I could sense both teams getting a little tight,” LaMonica said. “There was a lot of back and forth, there were some mistakes being made and I think both teams were super hungry for a win today, so it was a great battle like I said in the beginning.”

Towson ended a nine-minute scoring drought when Thornton beat the Nittany Lion goalie for her second goal of the game, trimming the deficit to one.

In the next seven minutes, the Tigers only took one shot on goal, and with seven minutes left, Penn State took an 11-9 lead.

Sophomore goalie Taylor Suplee recorded 12 saves for Penn State, and LaMonica was aware of the challenge of facing her.

“Unfortunately for us we were up against a really solid goalie and just had an outstanding game,” LaMonica said. “We knew that coming in that she was going to be in goal and we would have to work hard to get the ball past her and in moments we just failed to do that. We’ve gotta be stronger, keep our composure no matter what is happening in the game. Whether we’re getting up and down the field we gotta stay composed and not get tight, a little frantic at times.”

The Nittany Lions added another goal with 3:26 left that sealed their victory.

“I think it’s not uncommon to come out the first game of the year and get an understanding of where we sit, and that games out,” LaMonica said. “We can move forward and build on that for this coming game this weekend.”

The Tigers travel to Philadelphia to face Saint Joseph’s on Saturday, Feb. 15 at 1 p.m. 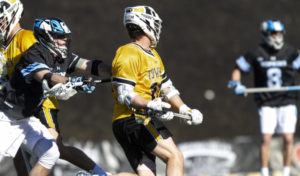 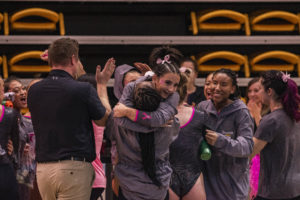