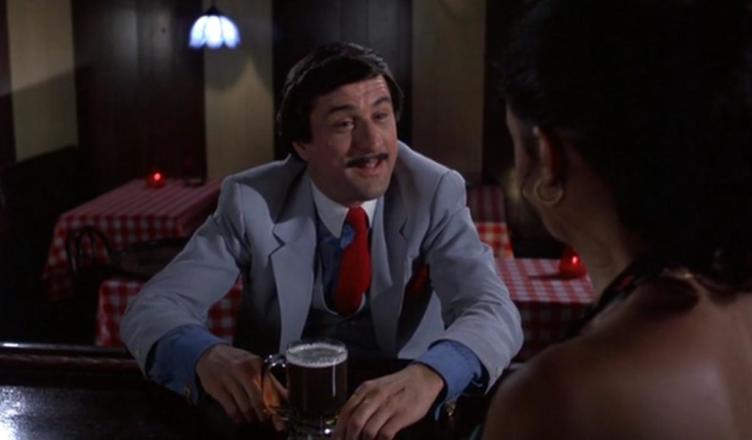 As witty as it gets at times, Martin Scorsese’s underappreciated and tantalizing “The King of Comedy” is not a comedy. In fact, in a lineup of films which showcase the horrid acts of outcasts and vigilantes, this addition leaves behind perhaps the most astonishing sense of insecurity of the entire Scorsese/Robert De Niro partnership.  With laughs that feel more self-inflicted than involuntary, “The King of Comedy” is an incredibly eerie film to experience.

Unlike two of his previous works, “Taxi Driver” and “Mean Streets,” which illustrated the dehumanizing capabilities of the big city, Scorsese uses “The King of Comedy” to focus on the little, angry people who also inhabit the big city but whose emotions and obsessions are what take over their lives.  Rupert Pupkin (De Niro) is one such person. A middle-aged celeb-aholic, Pupkin carries his Marilyn Monroe autograph like a badge of honor and has become a sort of leader amongst New York’s autograph poachers.

When he is not waiting outside the doors of the studio where Jerry Langford (Jerry Lewis) records his late night talk show, Rupert spends his time fantasizing what he considers to be his inevitable celebrity as a standup comedian.  His mother’s basement has been converted into a dungeon of aspiration: cutouts of Jerry and Liza Minnelli function as practice conversationalists, and an entire wall has been designated as his practice audience.

Rupert knows that he’ll make it big if only he can get onto Jerry’s show.  Unfortunately, Jerry has put up a firewall of producers’ assistants and security guards which stand in Rupert’s way.  This leads Pupkin to conspire with Masha (Sandra Bernhard), who displays the more clichéd characteristics of the typical celebrity stalker, to kidnap the talk show host. The ransom is a chance to appear on “The Jerry Langford Show.”

The film examines our fascination with and the cult of celebrity.  While it may be a bit exaggerated for the screen, the seething glances we get of what fame does to people who seek it and to those who have obtained it are truthful.

“The King of Comedy,” which was released a little over a year after John Hinckley attempted to assassinate President Ronald Reagan, feels very much stirred by the event.  Given that Hinckley has accredited the act to his obsession with “Taxi Driver” and its young star, Jodie Foster, Scorsese adds a personal touch to the threatening practice.  In 1982, Scorsese was certainly the right man for this job.

But while Pupkin’s rejections, his ambitions, and his questionable means of achieving them are the film’s primary representation of the fame curse, Langford, played brilliantly by comedian Jerry Lewis in his most grounded and probably personal role, represents those on the receiving end of the obsession.

His private limousines are infiltrated by crazed fans one step away from rabies; his private dinners interrupted by phone stalkers, and so on, so forth.  At one point after the hijacking, Langford spits out that he’s “only human,” but the takeaway is that for these kind of glamorized individuals, there is no such thing as “only human.”

De Niro’s take as Pupkin is one of the glanced-over pearls of his career.  He generates the uneasiness that “The King of Comedy” thrives on, all of which culminates in an unapologetically blunt final sequence that forces us to not only reconsider whether or not we won, but also if we are on the right team.