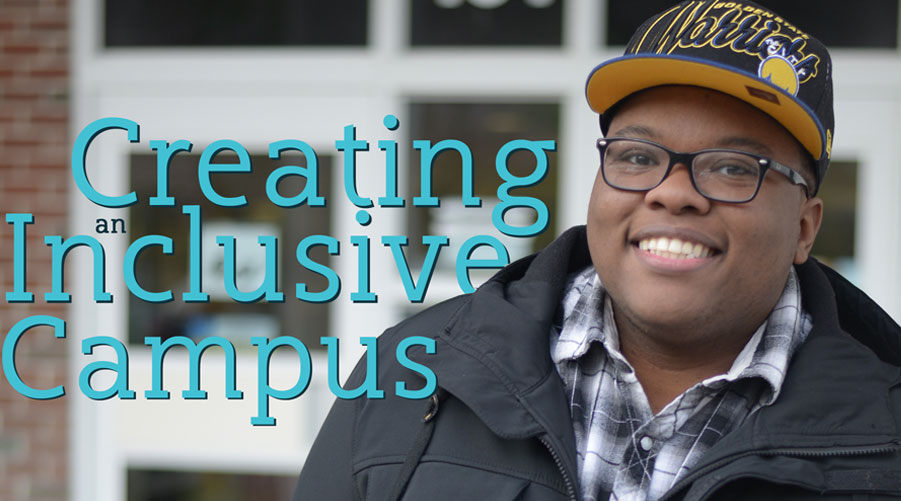 Kez Hall settles into his bed with his MacBook. His room, much like any college student’s, is sparsely decorated and cluttered. On his windowsill is mango Chap Stick, Adidas cologne, a few cups of stale water, and his wallet.

He reaches for the wallet and pulls out a photo of an infant girl. She’s beaming from ear to ear in a white dress covered in a fuchsia floral print. She wears a sizable white bow in her curly dark hair, white booties on her feet and delicate silver jewelry on her wrist and in her ears.

“I never felt female in any aspect,” 22-year-old Hall says, reflecting on his younger self. “It was terrible because I was always trying to fit in with a certain sect only to have the fact that I was female being pushed upon me.”

“I think it’s needed,” he says. “I feel like the whole point of coming to university is being able to have a choice in who you cohabitate with.”

Having been able to make that choice, things have come full circle for Hall.

“When I was growing up, before I transitioned, I would always be in girls lockers rooms,” Hall said. “Girls are really catty so it’s not always fun to be around. As funny as it is, now I live with two girls.”

Over the past seven years, increasing numbers of Maryland institutions have begun offering gender neutral housing. Among them are UMBC, Johns Hopkins University and Towson.

Gender neutral housing allows students to live in the same room with any other student regardless of sex, birth gender, biological gender, gender identity, gender expression or sexual orientation.

Jackie Wilson, assistant director for residential operations at UMBC, said that UMBC first offered this option in 2008 when students brought it to the attention of Residential Life.

The office worked with The Rainbow Alliance (a now defunct LGBTQIA+ club) to make it available.

At UMBC, gender neutral accommodation is based on demand and thus changes from year to year. Of the 4,000 beds on campus, 60 to 100 of them, or about 2.5 percent, are typically gender neutral, Wilson said.

“It isn’t a particular location on campus. It can be anywhere,” JHU Director of Housing and Operations Tracey Angel said. “We did that on purpose because we didn’t want to call attention to them.”

Instead of offering the accommodation in certain buildings, the school allows students wishing to live in a gender inclusive space to choose any residence. When a student chooses a room, it becomes exclusively gender neutral. This means the other residents in the room must wish to live in the same environment.

When the university implemented the program in 2013 it was used by 35 students, or 0.48 percent. This year, 95 students, 1.3 percent, are living in gender inclusive housing.

Assistant Vice President of Housing & Residence Life Jerry Dieringer said that HRL first offered gender neutral housing for the 2012-2013 school year, after consulting with the Center for Student Diversity. The option started as a pilot program and became a permanent fixture.

Out of the 15 residences on-campus, Millennium Hall, Barton House and Newell Hall are the only to offer gender neutral housing.

In the 2016-2017 school year, it may be available in the new Carroll or Marshall Hall as well, Dieringer said.

Less than one percent of students use gender neutral housing, so implementing it in every building would not make as much sense as putting it in only certain halls, Dieringer said.

Dieringer also noted that the university changed any single-person public bathroom from male/female to gender neutral at least four years ago.

“For practical reasons it doesn’t matter who goes in it,” Dieringer said. “For programmatic reasons and supporting our community, it makes perfect sense.”

As a transgender man, Hall faces the possibility of being outed every time he must present a form of identification.

Hall said this happens to him at the airport, too.

Most days he can pull off “passing,” which Hall describes as presenting as the gender he identifies with. Because his license and passport are both branded with an “F,” passing isn’t an option when identification is involved.

Hall has been a member of the club for LGBTQIA+ minority students on campus since he transferred three years ago.

It’s been helpful having a group of people to turn to when he’s going through rough times, he said. Joining the club also allowed him to meet other students he could relate to.

“I got some sense of, ‘Hey, this is okay. You can be this way. You’re not gonna die. People are still gonna love you.’”

In The Life, which has existed for 10 years, strives to create a “community within a community” through events and weekly meetings, club president Franklin Nunez said.

“We talk about the workplace, societal pressures and gender pressures,” Nunez said. “We sit together as a group and dissect the issues and make sure everyone just takes it out.”

It’s a necessary club for LGBTIA+ students who want to discuss issues that directly affect them, Nunez said.

“We have the Queer Student Union here, but we needed a more central theme for In the Life to talk more about minority groups,” he said.

The QSU has existed in some form since the mid 1980s, Lisa Simmons-Barth, the club’s faculty advisor, said. The name has changed over the years, but it has always been a space where LGBTQIA+ students can feel safe.

Simmons-Barth said the QSU is an integral part of the campus community.

“Despite what everyone thinks about progress being made, it’s not there,” Simmons-Barth said. “We need a place for folks to see and be around folks like them.”

The club hosts events and holds weekly meetings that include safe space. Safe space happens at the end of meetings and gives students a chance to vent about their issues and ask for help working through them.

“It’s meant to be different than our overall meeting in that people can come and say, ‘Hey, I’m struggling with this,’” Simmons-Barth said. “The executive board will sit and listen.”

“There are things that aren’t being addressed simply because if you have a group like the QSU that’s trying to work for the entire community, it’s just impossible to address all those needs,” Hunt said.
Joel Bolling, senior director of student retention at the CSD, said that the GenderBLUR club was created around 2010 when a transgender student noticed there wasn’t a place for students discuss their challenges and experiences as transgender.

Due to a lack of participation, the group was unable to make a transition in leadership from one year to the next, Bolling said. The group moved to using Facebook to connect but involvement has dwindled over the last six months.

There have been periodic attempts to revive GenderBLUR and create new clubs for transgender students. Bolling said such a club would be helpful to students, but efforts have not yet yielded results.

“I don’t know if the need just isn’t there or the scheduling hasn’t worked out,” Bolling said. “Some of the questions and challenges that some of the students are facing could be addressed in a group format with their peers.”

Being black and transgender — a minority within a minority — is not easy for Hall. Even more difficult is enduring transphobia from the members of the black community.

“What I kind of notice is that there’s this stigma that’s attached and it’s not a good one,” Hall said. “And I can’t seem to figure out why they’re more concerned with how I’m living my life.”

One member of the community has mis-gendered Hall by using female pronouns. Hall had to correct him multiple times.

“You don’t know the struggle that I had to go through to get here and to be comfortable enough to be here, so for you to take me back to a place where I was not happy, it’s not fair,” Hall explained to his friend.

Enduring transphobic behavior has caused Hall to consider the intersectionalities of his race, gender identity and sexual orientation.

“I don’t know if my duty as a person of the LGBT community that’s also African American is to educate, or if it’s to just live at peace for once,” Hall said. “There’s so much other stuff that I’m fighting, so do I really need to fight the people that are in my community?”

Though he may face some doubts, Hall knows one thing for sure.

“I really don’t like labels that much. I’m Kez and I’m happy.”