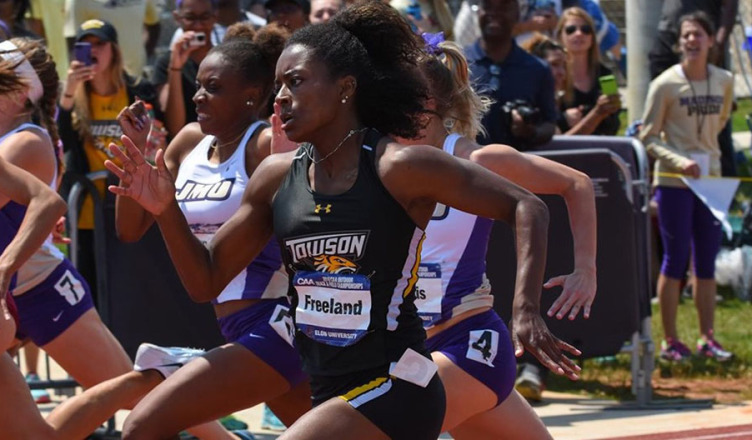 Towson set a new school record in the hammer throw event at the Delaware Open this past weekend, thanks to junior Ksenia Safonova.

“She continues to impress us as a staff and as a team,” Head Coach Mike Jackson said. “She is clearly one of the best in the country. It was a great day to compete yesterday and she showed that she was one of the best.”

Freshman Skyler Duncan won the javelin event at the Delaware Open with a 41.18-meter mark.

“It was her first performance of her collegiate career so we’re happy with how she performed,” Jackson said.  “It’s always good to get a win in your first performance and we’re looking forward to her competing against some even better competition and seeing how she fairs.”

Senior Brynn Warrington came in second place in the pole vault event with a 3.50-meter mark.

“I think the highlight was the field events, especially with the throws,” Jackson said. “It’s important to get to go to Delaware because we’re going to be competing there for our ECAC Championships to check out the facilities, the runways and such. It was a huge day for our throws program.”

“I think the major highlight for me was the two young ladies in the steeplechase,” Jackson said. “Erica has never run that event before and Abby continues to improve this year so they look to be people who have a chance to contribute to our conference.”

The Tigers will host the Towson Invitational at Johnny Unitas Stadium Saturday, April 15.

“Our plans are to be a good host and win and then also to have good individual performances on top of that,” Jackson said. “It’ll be about 15 to 20 teams that are coming so we look forward to hosting them and having a great overall experience. Hopefully we’ll get some good people to come out to watch on Saturday.”