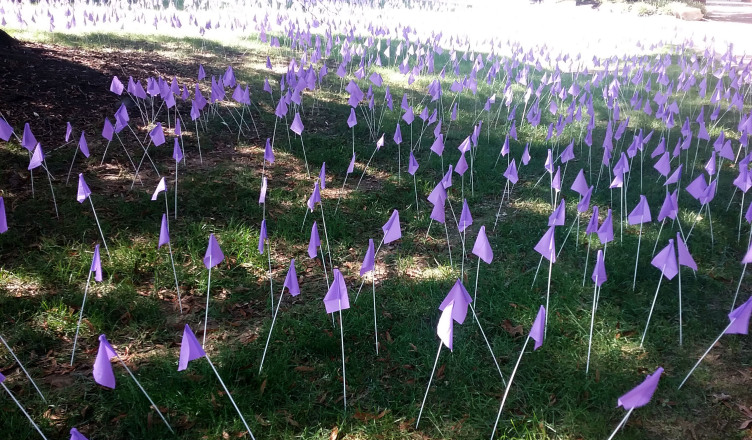 The flags, which are purple to represent survivors of domestic violence, are meant to show the number of Towson students that could be in or have been in an unhealthy relationship.

“This year we bought the flags, but in the past the wellness peer eds made the flags, which took many weeks,” said Rebecca Robbins, a graduate assistant from the Health Center. “There are 6,677 purple flags…that is the amount of Towson students who could potentially be in an unhealthy relationship.”

Robbins, as part of her assistant-ship program, helps manage and handle the logistics of SAPE.

Domestic Violence Awareness Month stemmed from the “Day of Unity” that was held in October 1981 and was organized by the National Coalition Against Domestic Violence. The purpose was connect activists across the nation that were working to end violence against women and children.

The Day of Unity soon became a week filled with programs and activities until October 1987, which was when the first Domestic Violence Awareness Month was observed.

Robbins said that this is an initiative from SAPE to “draw awareness to domestic violence because majority of college students fall in the age bracket where individuals are most likely to be in an unhealthy relationship.”

Robbins said that the issue is important because unhealthy relationships can be dangerous.

Signs also line the area, citing facts and statistics about domestic violence. Each of the signs has the hashtag #xoutrelationshipviolence written on it.

Junior and cultural studies major Sherifa Razaq-Lee said that she has always loved seeing the flags because she feels they act as a wake-up call for many.

“I think it helps to physically see that this many people can be, in fact, in danger in a domestic violence situation,” Razaq-Lee said. “I like the way they [SAPE] used the physical space to demonstrate that. I would like to know more about how they will prevent it or what steps they’re taking for students. Overall, I do appreciate it.”

Senior and health sciences major Miyah Overton also feels the demonstration is a good way to draw attention to domestic violence statistics, “especially when the prevalence is so high on college campuses.”