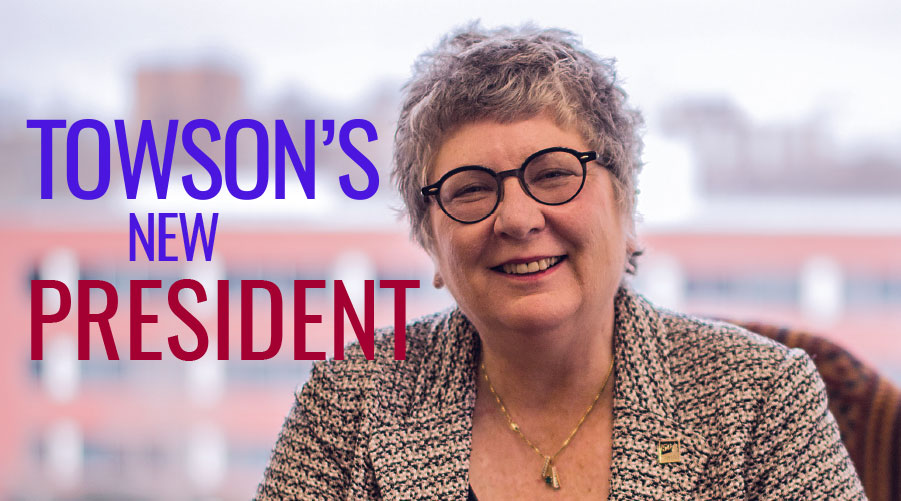 “Move-in day” for Towson University President Kim Schatzel was Friday, Jan. 22, but she didn’t bring anything to hang on the walls of her new office.

It’s by choice, she said. She’s waiting to fill the space with student and faculty artwork, because she “likes to brag on” the people she works with.

Schatzel, who was announced as Towson’s 14th president Dec. 4, said it’s a decorating style she’s brought with her from Eastern Michigan University, where she previously acted as interim president and provost simultaneously. Prior to that, Schatzel served as EMU’s provost and executive vice president for academic and student affairs.

She said that when it’s time to start running Towson University, her first priority will be “listening a lot.” Schatzel, whose first official day as president was Jan. 25, said she wants to spend time getting to understand campus and the community.

“The reputation and the quality, as well as the community aspect of Towson is well known and well documented and very much nationally recognized, too,” she said. “That’s a lot of what attracted me to the campus. But now I get to talk to people.”

Afer a drive from Michigan to Towson that took over eight hours, Schatzel went to the basketball game Jan. 21 where she “got to tweet [her] first official photo with Doc,” she said.

Schatzel played basketball in high school, but said that she didn’t keep playing in college because she “wasn’t that good.”

Schatzel’s tenure as president started just under two weeks after the 90-day legislative session started in Annapolis. Towson is a public university, and relies on state funding. One of the roles of a university president is, typically, to represent the university’s interests in state government.

For Schatzel, that means balancing her time between acclimating to a new campus and making connections in the state legislature.
“I’ll just have to work a lot,” Schatzel said. “And I’ve got a wonderful group of people who I work with that’ll organize me very well.”

During his time as interim president, Tim Chandler worked both on campus and in the state legislature to secure funding for a new science building. Chandler returned to his former role as provost as Schatzel took office Monday, but his work might have paid off.

On Jan. 21, the University reported that Gov. Larry Hogan’s proposed 2017 budget includes $162.8 million in funding to construct a new building for the Fisher College of Science and Mathematics. The budget is subject to committee and floor revisions and voting before the funding is final.

Schatzel called herself “pretty externally oriented,” and said that it would be important for her to have relationships with members of state and local government, businesses and nonprofits in the greater Baltimore area.

“I think the more that we can make connections between the community and the campus the better off we are,” she said.

Before Schatzel was announced as Towson’s next president, Chandler signed a document brought to him by a group of concerned students, pledging to work toward a list of demands.

Among those demands are increasing black tenureship at Towson, implementing a race relations course in the core curriculum and introducing diversity training for faculty.

“I know that the signing resulted from extensive conversation between the administration and the students,” Schatzel said. “I’ve got full confidence in that decision and that process that resulted in the signing of it, so I’m looking forward to working and supporting the commitments that were made.”

Schatzel agreed to a similar list of demands from students at EMU, though she said she never put her signature to anything. She said that she “wanted to understand what was motivating the requests.”

“I feel very strongly that having an inclusive and diverse campus is incredibly important,” Schatzel said. “You cannot have high quality university education without having that environment, period.”

Schatzel listed several similarities between EMU and TU, like their histories as normal schools and their “focus on the students.”

“I think that she really understands the Towson culture and what makes us unique,” Anderson said.

Anderson and Schatzel have met, but have not yet had the opportunity for a one-on-one meeting. He said that their first is scheduled for Wednesday.

“I think that she’s really going to be present and visible, which was one of the biggest things I was concerned about when the search was happening,” Anderson said.

Schatzel’s presence and visibility may be unavoidable for her first semester as president—she’s staying in the Towson Marriott. Her husband is still in Michigan, until they can find a house in the area.

“Since I’m going to be living in a hotel for awhile, I’m going to be going and eating dinner on campus, probably quite a bit, so I’ll be sitting down at tables with students and going, ‘Hi!’ I like to do that,” Schatzel said.

She also likes cooking, practicing yoga and participating in charity 5K races help her relax. She hasn’t been running recently, she said, but she’s signed up for a St. Patrick’s Day race in Baltimore.

Schatzel was born and raised in New York City. She accrued 20 years of corporate, new venture, and start-up experience before joining academia.

She served as founding president and chief operating officer, and later chief executive officer of a multinational industrial firm that employed upward of 1500 people on multiple continents, according to a statement from the University System of Maryland.

Schatzel filled various positions at the University of Michigan-Dearborn for over ten years before she spent about four years at EMU. And now, in the midst of TU’s sesquicentennial, Schatzel said she is excited to get to work.

“I think that when you get to be my age, you kind of are comfortable with who you are,” Schatzel said. “It’s a terrific campus and a great group of students, faculty and staff. So it’s not just me, it’s the university, and it’s done pretty well over the past 150 years. Given that, I’m expecting the fact that the success will continue, and I’m looking forward to being a part of it.”

–Carley Milligan and Sam Shelton contributed to this article.