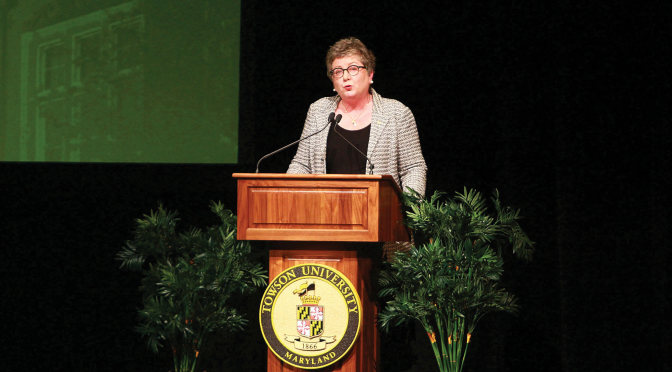 During an Oct. 20 presidential address, University President Kim Schatzel outlined the steps the university is taking to accomplish eight priorities that she announced in April, just 100 days into her presidency.

“At this important reflection point, I could not be more proud and more humbled to serve as your president and to work together with our amazing faculty, staff, students and alumni, as well as business and community leaders, to build Towson University’s next 150 years,” she said.

In the six months since her first President’s Address, Schatzel said, she has been working both within and outside of the university to collect data and information in order to accomplish her eight priorities.

“If you have not figured it out yet, we are very much in the discovery mode,” she said.

Schatzel called these priorities “multi-year endeavors” that will result from an “all-in, Towson effort.” She said she will be updating Towson on these priorities yearly with regular progress reports on the first day of December, May and September.

In order to retell Towson’s contemporary story in a way that will influence stakeholders, the university is conducting an identity audit. The audit will include research and focus groups with alumni, members of Towson’s campus, legislators, community and business leaders to identify what these groups value about Towson, currently and in the future, Schatzel said.

According to Towson’s website, the university selected Ologie, an Ohio-based branding agency, to conduct the audit. The audit is scheduled to be completed by late December and shared in early spring, Schatzel said.

After receiving feedback from community and business partners, Schatzel formed Baltimore + Towson University, a relationship dubbed BTU, to help people outside of Towson to more easily navigate the “complex, rather daunting, and not the most user-friendly university structure,” she said.

The next steps, Schatzel said, will be to create an inventory of Towson’s business programs and to establish a BTU Partners Committee which will guide BTU’s progress in creating and maintaining relationships with current and prospective partners.

She said she is working with Ken Ulman, former Howard County Executive and president of Margrave Strategies, to develop a comprehensive placemaking strategy that will strengthen connections among Towson and the Greater Baltimore communities.

The public will be able to offer feedback on the placemaking strategy at the Economic Outlook Forum on Nov. 16.

Schatzel said the university needs to continue improving its fundraising abilities. Towson is currently searching for a vice president of university advancement and is scheduled to select that leader by January 2017, she said.

Towson is conducting a feasibility study, including interviews with alumni, faculty, staff, community and business partners, that will result in a model for the university’s next capital campaign beginning in late 2017. The model will set fundraising goals and the campaign’s priorities.

A More Diverse and Inclusive Campus

This past summer, Towson created two university-wide committees comprised of faculty, staff and students that overhauled the university’s hate/bias reporting procedures and public safety procedures for large campus events, according to Schatzel.

Towson is also searching for the university’s first vice president of inclusion and institutional equity. The university plans to fill the position in late January, she said.

Towson has conducted a survey of over 120,000 alumni as it works to establish a world-class, lifelong Career Center.

A 22-member task force, which includes representatives from various Towson departments, associations and stakeholders, is developing a career center that supports students and alumni and establishes Towson as “a thought-leader in career education,” Schatzel said.

Over the next few months, the task force will be creating guidelines to assess career readiness at Towson and completing a needs analysis of business and community partners.

A task force will be developing a plan to meet faculty needs such as technology, collaborative space, and teaching workshops, Schatzel said.

The task force is comprised of three subcommittees which will convene on Nov. 7. The group is developing a faculty survey and identifying examples of faculty development centers nationwide, Schatzel said.

But enrollment has declined by about 25 percent over the last six years. International students are just two percent of Towson’s total enrollment this semester, Schatzel said.

Towson aligned its mission, the university’s strategic plan, the strategic plans of its divisions and colleges, and the campus Master Plan. The University also verified that its resources were allocated to meet those strategic goals, Schatzel said.

The next step, which is planned to be completed by the end of the year, will be to publish those results in a user-friendly platform so that the public may examine those findings, Schatzel said.

“As you have seen and as you have heard, the great work of Towson University’s next 150 years has indeed begun, and we will continue to advance our amazing university,” she said.