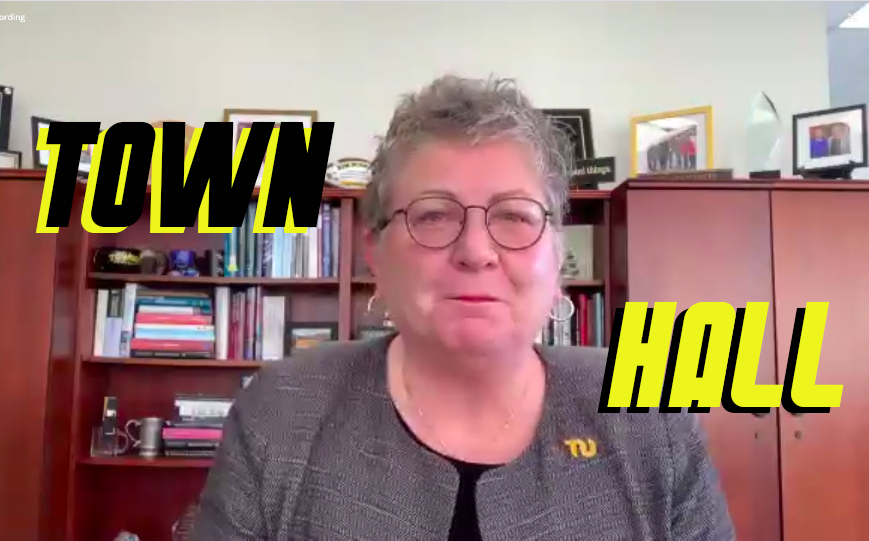 By: Meghan Hudson, Editor-in-Chief
Screenshot by Caitlyn Freeman/ The Towerlight

TU President Kim Schatzel said yesterday morning that the University has not furloughed any employees. Meanwhile, the Office of Housing and Residence Life has furloughed its student employees.

“[Furlough is a tool] that we have not used or intend to use in the near future because of the fact that we have made a commitment to be able to use personnel actions as a last resort,” said Schatzel in a town hall meeting Sept. 3 when asked if employees will be furloughed. “We are not looking at any type of broad furloughs or salary adjustments in any shape or form. […] I feel very strongly of the fact that our people are the strength and the staff and faculty and we will do everything that we can to have anything that impacts them be a last resort in terms of a broad approach.”

According to Avéon Laine, a Community Center Assistant (CCA) for Marshall Hall, HRL informed her that her front desk position will stop being staffed by CCA’s on campus on Sept. 4. This is also the last day of the ten day period campus residents were given to move out.

Just last week, the Student Government Association had asked Schatzel whether or not student employees will continue to receive pay now that fall modality has changed.

“We are not looking to make any changes in this area of our plan,” said Schatzel. “If students have concerns, they should reach out to their managers.”

Being furloughed came as a shock to Laine, as last semester all student employees continued to receive pay after TU’s spring modality shift.

“My response to this is frustration, mainly because this has cost hundreds of students, including myself, their main source of income for the semester,” said Laine. “Honestly, I expected that they would at least pay us our scheduled hours, because they did that when school closed in March, but I suppose not.”

Many students have voiced concerns on social media regarding administrators continuing to receive high pay, while students grapple with financial hardships, and furlough.

“It’s just really funny that the University had enough money to put those silly chairs outside and pay all their administrators and coaches high salaries but they can’t seem to afford to partially refund tuition,” said student Fiona Joan on Instagram. “@KimSchatzel stop saying you care and show the students you care.”

“We want to have this be targeted, and not have it be something that we would use in terms of a general tool to be able to address the fiscal issues,” said Schatzel.

As of now, HRL’s student employees are the only employees at Towson who have been furloughed. Laine expresses how she feels about other employees not facing the same circumstance.

“The fairness of that decision is evident to me, because some staff will be on campus; and others have families to take care of,” she said. “However, the University both knows and markets that the CCA job is very convenient to students because of its flexible hours and the fact school work can be done during shifts. With this in mind, it will not be very easy for students to find other jobs that will work with their schedules.”

Laine also noted that employees were told if the campus is to open in the spring, they will continue their positions at that time.