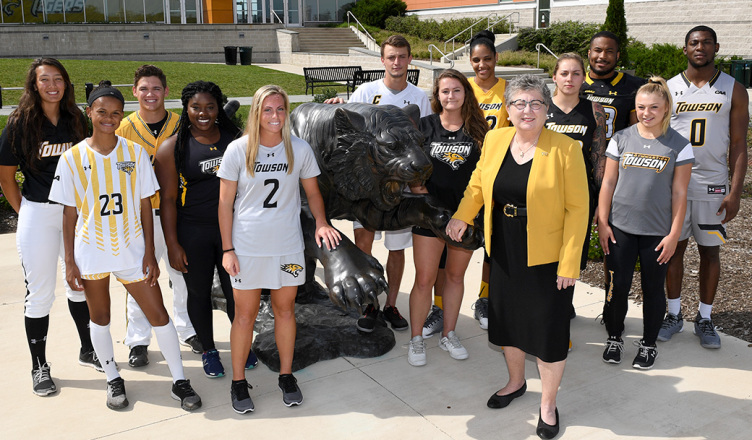 Towson University President Kim Schatzel has been inducted into the NCAA’s Division I Presidential Forum to represent the Colonial Athletic Association (CAA).

“I’m very thrilled and honored that they would ask me to represent the conference,” Schatzel said. “It shows how valued and respected Towson is.”

Schatzel is the first female representative from the CAA and the first leader of a Maryland college to sit on the forum.

“It puts Towson in a position where the school is in a national spotlight with other larger D1 schools,” said Jamie Peterson, head coach of varsity women’s tennis at Towson. “It gives her the ability to give critical feedback and input from Towson into the forum.”

The NCAA Division I Presidential Forum appoints representatives from the 32 collegiate athletic conferences in the nation, and the forum’s main focus is on governance of the NCAA. The forum rules on issues like transfer rules and their main focus is optimizing the student athlete experience during the recruitment process, while in college, and after graduation.

“I’m excited to work and support the other presidents in [the forum],” Schatzel said.

Schatzel said that she is looking forward to supporting the forum’s ongoing initiative to prepare student athletes for life after college.

“This agenda has been going on for a while and is now picking up a lot steam, so I’ll be working with the other presidents to first of all understand what work has been done, and where some of the directions and options are going forward,” she said.

In a study published in the medical journal JAMA in July, researchers examined the brains of 111 deceased NFL players.

According to the study, 99 percent of those players were found to have chronic traumatic encephalopathy, or CTE, a brain disease that can be exhibited by individuals who have suffered repeated head trauma.

“Often the stigma attached with behavioral health is greater within the athletic community,” Schatzel said. “Mental toughness is part of what being an athlete is supposedly supposed to be about.”

Schatzel said that Towson has added more behavioral health support on campus for student athletes to make sure they are healthy in and out of the game.

Towson has been prominent in D1 sports in the recent years: 19 D1 varsity teams at the university hold 28 regular season championships and 15 CAA tournament championships. Men’s lacrosse and women’s track and field teams currently hold titles in the CAA.

“I am very excited for President Schatzel to serve on this forum,” said Rob Ambrose, head coach of Towson football. “Her appointment to this committee shows her continued commitment to college athletics and the vital role it plays in a college community.”

Schatzel will begin her appointment in 2018, replacing current CAA representative Leo Lambert of Elon University, who will be retiring in the beginning of next year.

“I think it’s amazing that we have a representative from our school and someone who is really passionate about our athletic program,” said sophomore Ally Wesoly, a member of the women’s gymnastics team. “President Schatzel is always supporting the athletic teams and showing her school pride and I think that has been really influential on the student body.”

Marrisa Wonders, a sophomore on the women’s volleyball team, has high hopes for Schatzel after the president’s new appointment.

“Becoming the first female representative from the CAA is an amazing accomplishment,” Wonders said. “I am sure she will make as big impact on the forum as she has on this University.”