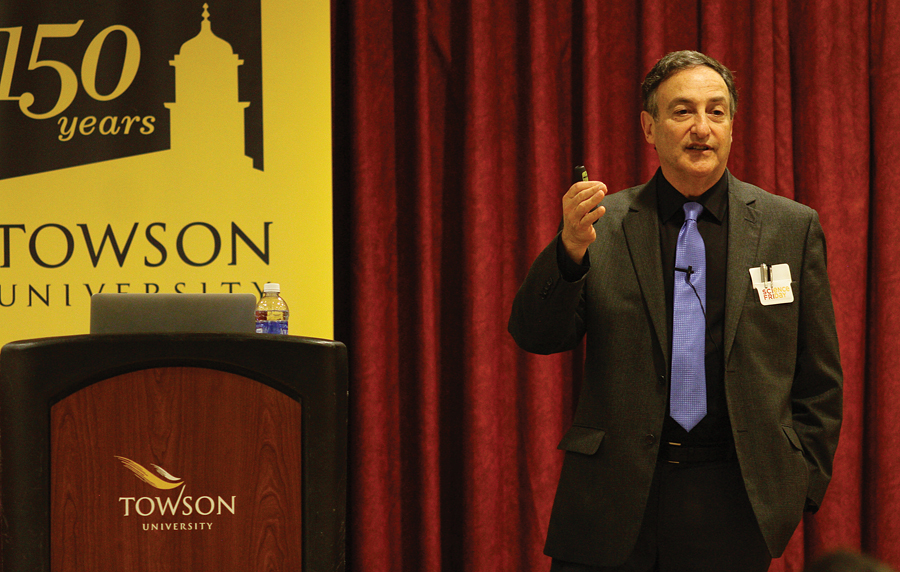 Smart is the new sexy and it’s finally cool to like science, according to Ira Flatow, host of the nationally syndicated radio program “Science Friday.”

Flatow spoke to a crowd of students, faculty, staff and community members that packed into the Chesapeake Ballroom Oct. 20.

“Thank you, fellow nerds,” Flatow said, as he took the stage. He was conversational as he spoke, and walked around the stage instead of preaching from behind the lectern.

Flatow said that most people don’t learn science in the classroom and that, more and more, popular culture is embracing science.

“They’re not going to learn it, they’re going to see it on TV and believe it,” Flatow said. “It’s where they watch their entertainment and family entertainment, this is how you get a conversation started.”

To help drive home his point, Flatow mentioned two movies, “The Imitation Game,” a film about Allen Turing, a WWII code-breaker, and “The Theory of Everything,” about theoretical physicist Stephen Hawking.

“When’s the last time two scientists competed for the Oscar for best movie?” Flatow said. “These movies are now lining up after the other because science is the next sexy.”
The money in Hollywood, Flatow said, is moving toward films and entertainment that highlight science.

“This happens because the producers believe, in their own hearts, they should be bringing some science into what they’re doing,” Flatow said.

Instead of learning about things like fracking or global climate change in classrooms, Flatow said, people are hearing about new issues from TV shows like “The Simpsons.”

He spoke highly of any show that’s educating, or at least informing, their viewers – especially “The Big Bang Theory,” a show that Flatow has appeared on twice and that has a huge national audience.

“The great news about science being sexy, about it being popular in the media, is that when science comes under attack, when people in Congress don’t believe in it, when they badmouth it, people don’t have to take the word of [those who would badmouth science], they can listen to their favorite character defend science,” Flatow said.
Flatow came to campus as a part of the Towson University 150th Anniversary Visiting Scholars Speaker Series.

His message about science education found a receptive audience at Towson, which houses the largest College of Education in Maryland.

“Trying to get people interested in science, especially younger kids, and learning more about how to do that and how successful he is doing it, it is really inspiring,” Nathan Prins, a senior physics major who was at the speech, said.

The next part of the series is on Thursday at 6 p.m. in the Auburn House. Nicole Sherrod, from TD Ameritrade, will be speaking about “The Future of Wall Street.”

The event is not open to the public. According to the Towson University website, to secure a spot at the event, anyone interested should make a donation of $150 or more to the College of Business and Economics Scholarship Endowment.

— Annie Sragner contributed to this article.