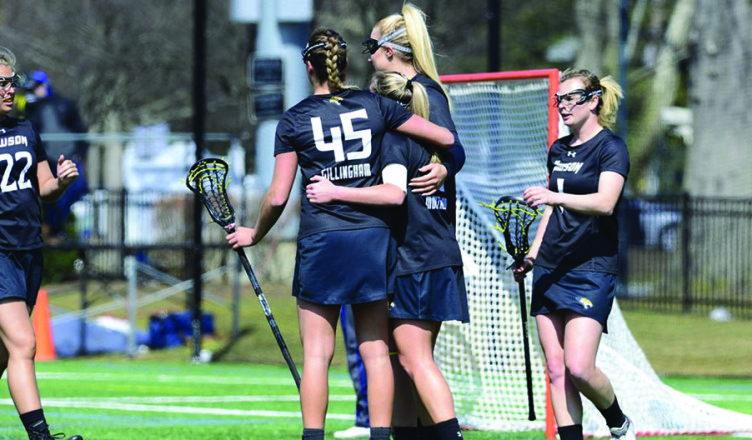 Towson fell to Hofstra 17-15 at Shuart Stadium in Hempstead, New York, Sunday afternoon, despite a strong 11-goal showing in the first half.

Towson came out of the gates with a quick 4-0 run. Sophomore attacker Carly Tellekamp had a pair of early goals, while junior midfielder Emily Gillingham had a goal and an assist.

Hofstra scored back-to-back goals to make it a two-goal game with 21:27 in the period, but junior attacker Jenna Kerr drove Towson’s lead back to three with 19:19 left. The Pride rallied with a 3-0 run and tied the game 5-5 with 14:16 left in the half.

Head coach Sonia LaMonica called a timeout, and the Tigers responded with five straight goals, giving them a 10-5 lead. Tellekamp had three goals during that stretch to secure her second straight hat trick and fifth of the season.

LaMonica praised her team’s first half offensive production and applauded their attention to detail.

“We’re doing a good job with off-ball movement, making sure our spacing is good and making sure we’re not just standing around,” LaMonica said.

Hofstra responded with two straight goals, but Tellekamp scored her sixth goal of the half with three seconds left on the clock, which sent the Tigers into the break with an 11-7 advantage.

Back-to-back goals from freshman midfielder Alyssa Parrella allowed Hofstra to make the score 11-9 with 24:34 to go in the game, but Gillingham’s second of the day gave Towson a 12-9 lead with 23:46 left.

Hofstra went on a 6-0 run to take a 15-12 advantage with 11:27 left in the game and did not look back. Junior midfielder Drew Shapiro scored three times during that stretch for the Pride.

The Tigers and Pride traded goals over the final 10 minutes of the contest, but the Tigers were not able to overcome the deficit and fell 17-15.

Sophomore attacker Natalie Sulmonte scored twice for the Tigers during that stretch to record a hat trick.

Towson is back in action on Friday, April 21, when the team travels to Delaware for a 5 p.m. game.

“It’s going to be important that we take care of business moving forward.”