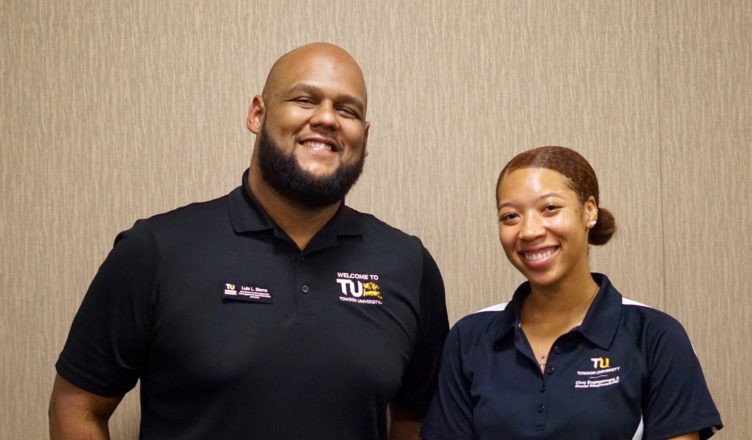 Photo by Kat Vakhromeeva/ The Towerlight

In 1954, the Supreme Court ruled school segregation unlawful under the constitution in the landmark case known as Brown v. Board of Education. Yet in New York, schools today still face the most severe segregation levels in the nation.

A discussion focusing on this issue of segregation in schools was led by LaDena Eames, a graduate student assistant for TU’s Office of Civic Engagement and Social Responsibility Wednesday.

“I don’t believe it’s fair that people, especially within the same communities, are getting different amounts of education,” Eames said. “It’s not just about race, it’s about all these other diversity factors as well, like housing status and what language you speak.”

At the talk, other crucial variables within the issue of school segregation were examined in a connection outside of the classroom.

“There are zoning laws that are keeping people in place and telling them that they need to go to a particular school,” said Saidat Adeleke, an IT Specialist at Cook Library and an attendee of the discussion. “Now the schools are segregated because their communities are segregated and the laws are telling them to only go to schools within their own circles. It’s enforcing the segregation that already exists.”

As a process that has been ongoing since Brown v. Board, school integration is a particularly difficult idea to implement. Recent studies have found that segregation has even been increasing.

To foster integration in schools, Eames encouraged students to know the power of their voices and “realize that their voice matters.”

“We can create improvement and progress within our… institutions,” she said. “We have power, we actually have a say in this.”
According to Eames, a change here starts with the staff.

In regard to Towson University, general perspectives acknowledge and welcome the university’s efforts to be inclusive although remain aware of the ways that it can continue to be improved.

“The demographics continue to be more and more diverse and we need to make sure that everyone here is welcome,” said Luis L. Sierra, assistant director for the Office of Civic Engagement and Social Responsibility. “We are being intentional and genuine about the intent of building a community for everyone on this campus… while still being cognisant of issues that affect specific student groups [and] continuing to be mindful of the ways that we support our students.”